Ecologically, when you're within the latitudes of 23.5 degrees, you'd find yourself in rainforests rich in diversity but poor in nutrition. The forest floor is a barren mess simply because the canopy is so thick that one to two percent of sunlight ever breaks through it into the floor. As a result, you'd consider yourself lucky if you ever felt a breeze on the forest floor.

In this alternate Earth, if we are to clump together the plants that make up the jungles of South America, Africa and sub-Himalayan Asia for the last four million years, it might look a little like this: 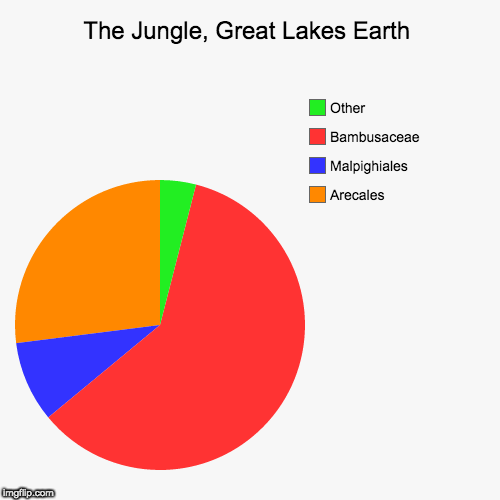 Note here that bamboo makes up the vast majority of modern jungle plants.

Before I ask you my question, let me answer a question that you might be asking--how could this jungle have such a low diversity? 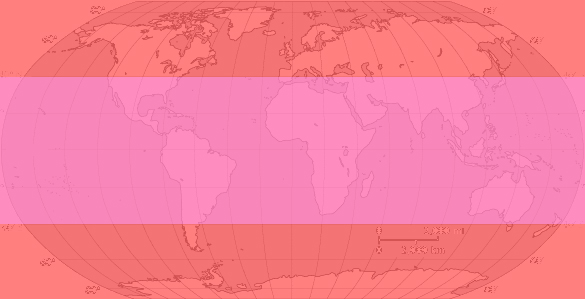 Marked in red is the extent in which the Köppen climate type Af, tropical rainforests, could have spread 144 million years ago. The MC Extinction Event 66 million years ago was merely a temporary disruption. 45 million years ago, the Antarctic Circumpolar Current had finally gotten Antarctica surrounded, icing it. This icing disrupted the global climate to the extent that the global grip of the rainforests was weakening. Marked in pink was the rainforests' extent before five million years ago, when the gradually descending global temperature suddenly spiked down at a faster pace, creating a mass extinction that resulted in the loss of half of all terrestrial species and two-thirds of all marine species. In this extinction event, the plants and animals of the tropics bore the brunt of it, thus resulting in the low diversity that now you see on the pie chart.

Bamboo seems to have an advantage over regular trees in that the stem is uniformly narrow and the leaves are too sparse to create a canopy. So in a tropical rainforest that is predominately bamboo, would this have changed the character of the forest floor in any way?

There is no question a rainforest made of primarily bamboo would be different.

Sunlight would penetrate further into the forest BUT having attempted to remove some large stands of bamboo - I can say pretty clearly - While it does not have a canopy as such - it is VERY thick at the base.

It is very hard to push through and would likely be even more difficult for large creatures to dwell in than a typical rainforest we are familiar with.

This is even allowing for the incredible variety of bamboos that exist.

On a semi-regular period (usually decades, sometimes 100+ years, species dependent), bamboo flowers en-mass and then dies -- and the die-off clock is both inherited and synchronous!! So if you have only one species of bamboo predominating in some place, you'd periodically have an ex-jungle.

The forest floor will periodically get lots of light -- and then have lots of dead cellulose, falling all over the place. Termites apparently do eat bamboo, so it'll go away sooner than one might think: Bamboo Insect Infestation.

The probable rainfall should keep the fire danger low, but a mass die off of the dominant species would have all sorts of effects, both on the floor of the forest and all over, until the bamboo had all died and fallen. The bamboo seed would probably be an exploding food supply for many animals.

I hope a periodically mass-flowering/dying forest is useful to your worldbuilding.

Ranong province in Thailand has many acres of bamboo rainforest, a few acres of which I have visited. It is s little-known area, with national parks tourists have not even heard of, where you can still see wild tigers and elephants (with the proper precautions).

The easiest way to traverse this bamboo rainforest is to follow a stream bed - venturing away from a stream requires a machete, a strong arm, and many hours per kilometre.

In the wet season, the stream beds fill up with water, and it is not possible to use them as roads.

The bamboo grows as tall as a four or five-storey building. When a trunk falls, it lodges sideways against the vertical trunks, making it very difficult to weave a path between the stands of bamboo, even in places where there are spaces between their bases.

You can find much more info by Googling the region, and I can hook you up with a local Thai homestay if you want to do some in-person research. The dry season is Dec-Mar.

Not the answer you're looking for? Browse other questions tagged evolution environment flora or ask your own question.

1
Possibilities For A Floral Adaptive Radiation
20
What would be the state of decay in an abandoned city?
3
Tropical Vs. Subtropical Rainforests
7
Could Bamboos Evolve Into Trees In the Past?
5
Would a More Extreme Icing of Antarctica Create an Extinction Event?
3
The Fate of Marsupials in a More Southerly Australia
6
In an Ice Age Extinction, Which Latitude Would Be Hit Harder--Tropical or Temperate?
2
Would This Chosen List of Animals Occupy the Earthworm Niche?