What color dyes would be available to the average person in a medieval world?

First, let's talk about the base fabrics available during the time, because, why not:

The picture below gives you an idea of how the under and overtunic worked, although this picture is likely of more highborn folks, likely wearing classier fabrics. The commoner version would be orange and yellow, most likely. 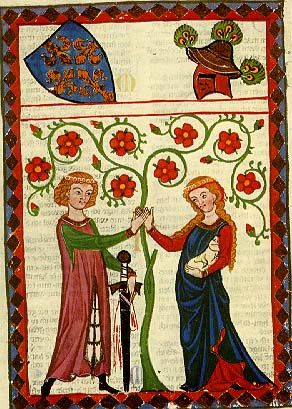 What you will NOT find for much of Medieval times is velvet. I know, this is in every costume EVER for a Medieval lady. But despite Hollywood's portrayal, it was not until early in 14th century that it started to be a big thing--and even then, it was exclusively for high religious, and highest nobility. From 500-1100 there wasn't much in the way of velvet.(Yes there are earlier velvets, but the pinnacle for it is in the Renaissance era. Prior to that it was mainly used to upholster, though there was some use in the 12th century) Once it was introduced widely during this period, it was even less likely for a commoner to have any. There aren't many laws prohibiting wearing it for merchants during medieval times, because, unlike silk, it was harder to get.

Further, a lot of what people think of as Medieval fashion is actually more like Renaissance era. This is partially because the real advent of painting and art was in the Renaissance & the clothing depicted showing "Medieval times" was often based on the fabrics and colors available during the time of the Renaissance. 1400-1500 was a real jump forward in fashion.

Compare the above, which is really very late Medieval/early Renaissance through Mid-Renaissance, to this image from the 1200s

A Lot of depictions of "Medieval" clothing you'll find on the net were rendered far later than the Medieval era, and thus were inaccurate.

difficult and expensive to achieve. My reading on the subject does not seem to substantiate this reasoning. Black is documented as being achieved by many different but simple methods, using many different kinds materials, including oak galls, human urine, blackberry leaves, and lime, all of which are inexpensive and readily available all over Europe. Source.

A nobleman might actually demand that their black or dark brown woolen cloak not be dyed at all--since they knew dying to be a messy and smelly process. Instead, they would ask for it to be woven from the wool of a dark or completely black sheep, prized for its rarity.

Yellow Everything from onion skins, to weld, to turmeric, can get you a shade of yellow. Pretty darn common.

Orange Surprisingly common. You could take leaves or even peat in order to get orange, without even a secondary process. Sometimes, the first run would get you a brown, but running it through with ammonia could bring out the brightness and the color.

Brown Tannins can result in this color. Very easy to get. Can also happen in combo with other things.

Blue Woad is the main source, though there's also the more expensive indigo and the prohibitive lapis lazuli. Far more common than you might think! Woad grew all over and the dye result is very pretty!

Better living through chemistry was the motto of the day. For instance, I wanted a green wool and after dyeing a hank first in turmeric and then indigo, I was surprised (and dissappointed) to get brown. I already had brown. Lots of brown. “Toss it into the ammonia bath.” Which I did and instantaneously it turned the most lovely shade of moss green. The batch of wool that I dyed in weld and indigo needed no ammonia bath to turn green. But who would have thought. And now we know why urine was so popular for dyeing fibers. It was the period ammonia and it could work wonders. (source)

There are some lichens which can produce a dull green as well, which can be brightened by a dip in woad, maybe in the second bath.

Red Brazilwood, Madder, and kermes or grana from insects. Kermes, grana and Brazilwood is more expensive. Madder is far more common. You could likely also "fake" red by doing overdyed orange dyes and using urea or other derived chemicals to draw out what you need. Surprisingly common, although most of the poorest commoners wouldn't wear a true red, it would be more brick or orange-looking.

Purple See red, for your base. Red & blue make purple, so, you don't always have to do something that specifically gets you purple, just mix the two or do a dip in red and a dip in blue. Often illegal for commoners to be able to wear this. There's also a snail that gets you purple. But you gotta crush a lot of them. And often it was specific shades (like the ones you could get from the snails) that were illegal--not that sumptuary laws weren't ignored. Some berries and wines could get you a light color, but that often faded to brown.

This link shows you all the colors, and I see someone has already provided it in the comments. It is a great place to start, for certain.

Things to keep in mind.

Intensity of color and expense of the fabric depended on

So a merchant might say: "Blue so fine! Just the second dip! Second only to the ladies of the castle...." and so on.

What natural dyes are available and affordable depends mainly on the available plants and animals. For example, in Europe, according to this article: Natural Dyes – The Top 3 European Dye Plants

For thousands of years, the three main European dye plants were, and still are, woad, weld and madder. Blue can be extracted from fresh woad leaves whilst the flower spikes and leaves of weld yield neon yellow and the fleshy roots of madder produce a brick red. Various shades of green can be obtained by over-dyeing woad and weld, whilst purples and browns result from over-dyeing woad and madder and it is no surprise that weld over-dyed with madder produces orange. All these colours are light and wash fast.

Although Woad, Weld and Madder produce (respectively) blue, yellow and red -- the primary colors -- overdyeing with these three does not often produce vivid secondary colors. So the available color palette was limited/muted for most commoners. Here are some examples on wool: 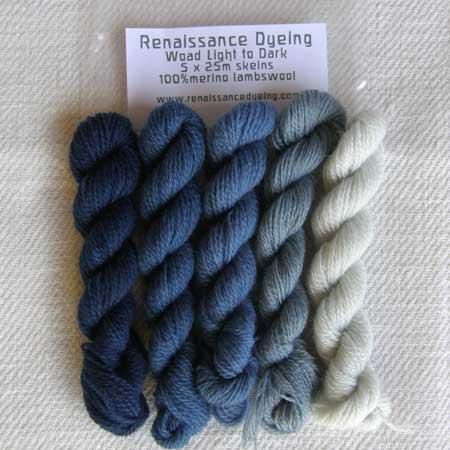 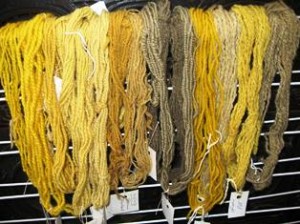 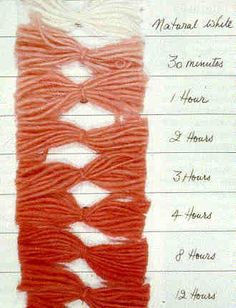 There were certainly other colors, but most of the bright (and colorfast) ones were so expensive that only royalty or the wealthy could afford them. For instance Tyrian Purple and Cochineal/Carmine Red:

It looks like you already have an ansswer, but here's mine. Red, from berries/blood of livestock. Green can be gotten from the inner bark/sap of young trees. White from sheep's wool. I don't know much about england, so that's it. Also, all the clothes would be stained/dull colors.

Not the answer you're looking for? Browse other questions tagged reality-check technology medieval clothing or ask your own question.

11
Is the location of major cities deterministic?

7
How long could an age of medieval tech last?
6
Alternate alloys for weapons and armor?
8
What would be the impact on a medieval society if “cure disease” magic was available to the powerful?
14
How can I explain alien skin being different colors?
6
Where do you put a photosynthetic Dyson sphere?
5
Will these foods provide sufficient nutrition?
12
Could an organism see in infrared light as well as normal light, using its brain to process what it sees into a single image?
1
How plausible are the terrain and land-forms on my fantasy map?
4
Looking for a review of my tidally locked red dwarf planet system specs!