D&D Campaign - Closing off a Mountain Pass with Explosives

I am writing my second D&D 5e home-brewed campaign. As with most D&D campaigns, this is set in medieval (like) times. In this adventure, the party is sent to aid a new settlement from a potential orc invasion from the north. The only thing separating the village from the orcs is a large, craggy mountain range with a single pass. The villagers have hired the party to close the pass using a strange "black rock" mined by the neighboring dwarves.

I've researched gunpowder, and it appears that it would have been something available during this time-period (fantasy or not). I know I can always use a wizard or other spell caster to use a lightning spell to ignite the powder, but I would rather have this newly discovered "black rock" used to cause an avalanche and seal off the mountain pass.

Therefore, I'm looking for a very large, effective explosion, using the black rock, that could be detonated from a (relatively) safe distance.

EDIT TO CLARIFY: How did a person set off an explosive (black powder, gun powder, etc.) in the middle ages?

Thanks for any input!

Laying out enough black powder to get a reliable fuse over a long distance will take a lot. Since it's probably expensive I doubt they'll want to waste it that way. Instead:

1) Candles. Make up some special candles--the bottom part of the candle has a bunch of highly flammable material embedded in it, the rest of the candle is ordinary. Use multiple candles and put something around them to shield them. With good manufacturing you should have a reasonable estimate of how long it will burn. (Remember, it goes off when the first one burns down so it will be on the low side of the average, much more regular than simply the average.)

2) Bury the bomb. There's a short fuse leading to a spring-loaded, insulated door. It wants to pop open, you keep it from doing so by putting a piece of wood on it. You put more wood--build a campfire. When the fire burns down to the point that the door pushes coals out of the way to open the bomb goes off.

3) Take a decent sized rock, tie a rope to it. The rope is wound on a wheel, when the rope unwinds quickly the center gets hot enough to light something which sets off the bomb. You put the rock on a teeter-totter hanging over the edge (you said this is to close a pass), on the other side you put a bucket of water with a slow leak plus some other rocks--this side should contain a bit less total weight than the rock not counting the water. When enough water has leaked away the balance shifts, the rock goes tumbling and the bomb goes off. Beware of the non-linear nature of water timers like this!

4) Put a pulley next to the bomb. You have a rope (heavy twine is enough) hooked over it. Take something that will stay burning despite rough handling and tie one end of the rope to it, reel in the other end. When the burning thing has been reeled up to the bomb it goes off. Advantage--near perfect control over when it goes off.

5) Teeter-totter again. The down side has several burning candles. When enough weight burns off they rise--and light off the bomb.

Depending on the age:

1) Fuse. Lay out a long line of fuse, and set it on fire. The only issue with this is if it doesn't go off as expected, then you don't really know why (it could just be slow-burning), and long bits of fuse aren't necessarily that reliable

2) Mechanical. Depending on when your timeline is, technology like the wheellock could be available (it basically came into being at around the end of the Middle Ages. If you have this technology then you can essentially hook up a musket (or mechanism of) to the end of a long piece of string, and set off the explosives remotely.

For petards (that is castle gate breaching charges) they used actually fuses(sometimes called slow matches) which is just a candle wick wrapped with black powder and another layer of cloth. the important thing was the burn time was really unpredictable becasue the means of making fuses was really imprecise. If you made the fuse too long the emeny might put it out too short and sometimes it would burn really fast and explode before it got to the castle killing your own men, hence the phrase "hoisted by your own petard". 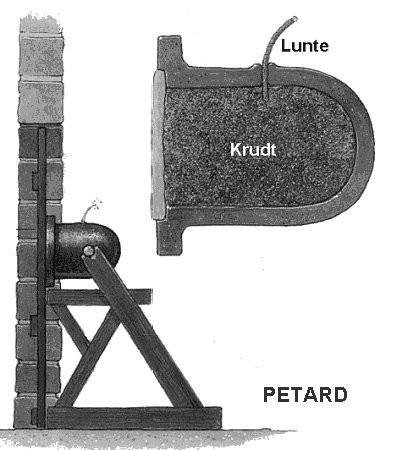 Not the answer you're looking for? Browse other questions tagged magic medieval explosions games or ask your own question.