Could there be more than two poles on Earth?

So I was deciding on ways to end my world in a futuristic scenario, and I had an idea. As we all know, Earth has two poles, and these poles are moving constantly (Magnetic Poles are different from actual Poles). The recent average movement is about 10KM a year. In the past the poles have completely reversed, as in, the North Pole became the South Pole.

This is all because of how the molten core of our planet fluctuates and moves. The outer liquid iron core is constantly moving around a solid inner iron core creating a magnetic field that spans thousands of kilometres into space. This magnetic field (Magnetosphere) protects our upper atmosphere and Ozone from being blown away by charged particles that emanate from the sun. 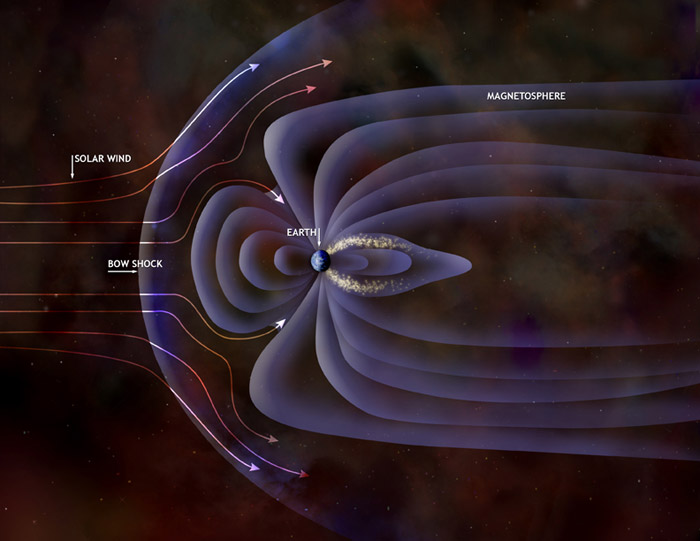 Astronomers hypothesised that the weakening of Mars' magnetosphere is the reason its atmosphere almost entirely blew away.

Whilst our core is cooling (over billions of years) I wondered if it might create multiple poles, which would lower the extent our magnetosphere reaches and create more holes where the magnetosphere springs from, severely crippling our protection against solar winds perhaps to the point where it blows away our atmosphere.

Anyways, what I'm asking is, could there be more than just two poles?

It is believed that in the past the earth had multiple chaotically spread poles and that this only changed recently around 650 million years ago when the core became less turbulent.

Our planet's dynamo is incredibly complex, so it is entirely possible that it might revert to that less orderly state, where many poles will onces again start appearing and disappearing for millions (or billions) of years.

Even more plausibly however, our poles also (north and south) periodically switch places in an event known as geomagnetic reversal, during which many poles temporarily emerge, this is even quite likely to happen within our lifetime as the last one was 780,000 years ago, yet 450,000 years is the average duration between each switch.

Yes, during a geomagnetic reversal (which lasts from about 1000 to 10000 years, but sometimes it's much shorter) Earth magnetic field weakens and many local poles can appear.

Yes, for a number of reasons, and it's somewhat realistic

@AngelPray and @RandovanGarabik are absolutely correct, geomagnetic reversals may weaken the magnetic field and cause multiple poles. While the shortest reversals usually take 1,000 years, you could handwave a mechanism or catastrophe to speed up the process - or have it jumpstart, etc.

In addition, other planets we have observed have very complex magnetospheres; it's reasonable to conceive of something as simple as a pole reversal here at home.

Not the answer you're looking for? Browse other questions tagged science-based geology far-future or ask your own question.

6
Moving asteroids into a planet's orbit to increase rotation to produce a magnetic field
10
How Might I Design Mountains for My Tidally Locked Planet?
13
Under what circumstances is Humanity more expendable than Earth?
0
Iron-rich rogue planet that is 12x Earth's mass collides with the Sun; now what?
4
Could a more convenient form of energy transfer/storage than electricity be possible?
6
Effects of Red Dwarf CME (Flare) on Biological Life and Atmosphere
9
How do I give my planet a stronger magnetic field? Playing with variables
8
Impacts of a moon falling on an Earth-like planet?
6
The Earth and Moon resolidify under a bluer star, their outer layers evaporated and burned away. What do they look like now?