In a video game series called Portal, we are given a gun, which shoots two portals: an orange one and a blue one.

These portals have the following properties: 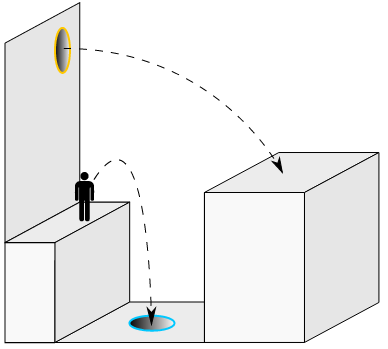 Now, assuming that such we can create such a gun, does the existence of these portals contradict any of the laws of physics? Is their existence possible, in theory?

There was a paper on this when portal came out, though I cannot seem to find it right now.

The end answer was Yes, portals are physically possible, but the picture is probably not. The worst hand waving has to be done in the process of making the portal. Defining why two sections of space-time would get cemented together in this way is a job for worldbuilders like us, not for scientists.

Instantaneous communication is no problem, because we could curve space-time to make the link. Effectively this would decrease the "straight line" distance between an emitter and a receiver to keep the speed of light rules in place. There would be some annoying General Relativity effects during the process of placing the portals to deal with, but I don't think it would violate anything. It'd just be nuisance.

Conservation of energy requires a bit more excitement. After all, Portal's ability to break the laws of physics in this way were legendary. Most energy is conserved without effort. Momentum in equals momentum out, and that accounts for a great deal of the potential conservation issues. However, there's always gravity.

These portals would need to interact with gravitational fields to avoid violating the conservation of energy. Whatever the underlying mechanism is for gravity, it would have to bend the direction of gravity around the portal. It would, in fact, have to bend the direction of gravity everywhere to ensure gravitational potential energy can still be modeled as a divergence free gradient field. Hopefully the mechanic would be localized, so it would have less and less of an effect as you walk away from the portals, otherwise people on the other side of the world would notice when you plopped them down. That being said, the more "evil" you are in your portal placement, the more the laws of physics will have to be "creative" to keep the laws intact.

The picture of how portals work would probably not apply. Because you simply jumped off a ledge and were carried by gravitational energy to the portal, through it, and off to the far ledge, the far ledge would need to be at a lower gravitational potential even though instinct directs us to assume that, because its "higher," its at a higher potential energy. We are used to working in fields where gravity always points down. I would expect most "reasonable" portal field implementations would not have this behavior (for a reason I'll mention at the end), so it is unlikely but not impossible that the picture would work.

Now for the hard parts

The edges of the portals will be tricky. As Peter Masiar put it, we like space time to be continuous. These sharp edges will end up being mighty torrents of quantum rage... not infinitely thin, but you'd have to spend a lot of work stabilizing them because... well... you cut a hole in the universe pulled itself through itself, and then glued it all together. What do you think would happen? Fortunately, the portal graphics clearly show this chaotic dangerous region around the edges. For your safety and the safety of others, please do not lick the edges of the portal.

The final issue would be the nastiest: the energy of creating a portal. When you drag spacetime around, the conservation of energy is STILL in effect. If you change the direction of the gravity field, you will need to effectively recalculate the potential energy of every object in the universe. If you "raise" the universe, you have to put energy into it as you make the portal to offset this potential energy. If you "lower" the universe, it will emit energy which will have to be reclaimed, or lost as gamma radiation. Don't have any tumors? Well, unless you're wearing lead lined underwear, we've taken care of that too!

So in the picture example, if you do the following:

Then you MUST have put in mgh worth of energy into the portal to lift you from Rest state A to Rest state B. It looks like that's about 2m higher than before. The portal gun has to do the work... you don't get the energy for free.

Also worth noting is that the gun doesn't get to "know" how you plan to use the portals, so it probably wont get to be so efficient. It will probably have to warp a lot of gravity and "move a lot of objects." Likely it will require a nuclear power station's worth of energy to generate a consistent gravity field, and then unleash a nuclear bomb's worth of energy when you collapse it back to normal (with the difference between work in and "loud bang" out being exactly 1 Chel mass * 9.8m/s^2 * 2m. I tried to weigh her, but the scale couldn't display enough digits).

So sure, you can bend the laws of physics to make the portal work. You just can't break them.

The main problem with the portals is that while they maintain kinetic energy (your speed going in) they do not maintain potential energy. That's why you can put one portal in the ceiling, one in the floor, and fall through going faster and faster.

That fundamentally breaks the law of conservation of energy. The only way it is possible is if the portal generator is adding energy into you to make up the difference.

It's been assumed that the portals work as wormholes, changing the topology of spacetime. But, what if that's not how it works? It could be teleportation ports instead. I recall a book series where "fax" technology had nanomachines that disassemble and analyse what is pushed into it (the plane of nanotech seems to be a portal) and another one can reproduce it. That could implement a portal in principle without twisting physics at all, reducing it to normal stuff: communication bandwidth and power input. Going in and coming out at a substantial velocity would be a challenge to the engineering, but in principle does not require new physics. The receiving end applies velocity to the atoms it's arranging at the surface.

They...oh wow they violate so many rules, but really it's such a violation I'm having trouble even knowing where to begin to articulate all the rules they violate lol.

so they violate thermodynamics a tim said, effectively creating free energy. if you have a way to do that you can pretty much break every aspect of the universe, thermodynamics is the driving force of everything.

in addition the violate the laws of inert. They also allow instantaneous communication across indefinite distances which violates relativity and the speed of light limitations.

The portal gun has a miniature black hole inside it. If Aperture Science has found a way to contain the gravity well, it makes sense to assume that the portal gun can "harvest" energy from the gravitational force itself. So the energy required to hold open the portals comes from the black hole contained in the projector.

Portals following those rules violate the laws of physics in several ways.

First, energy and momentum aren't just conserved globally, they're conserved locally. They obey continuity equations, which tell you that in order to get them from one place to another, they have to travel through the space between. There's a lot of quantum mechanics that sounds like it breaks that rule, but it doesn't.

Second, the portals don't conserve momentum at all. (Yes, GLaDOS was wrong about that.) Momentum is a vector. It's not just an amount of stuff; its x-, y- and z-components are separately conserved. Changing its direction disconserves it.

Fourth, the portals violate Einsteinian relativity. They permit instantaneous transmission of information between locations, and therefore they require time travel. Since there's some confusion about why those are related, let me explain. Suppose you travel instantly from point A to point B. According to an observer moving (rapidly) in the direction from A to B, you arrive at B before you leave A. Since all frames of reference are equivalent, you're free to travel from B back to A instantaneously in this other frame, thus arriving at A before you left, killing your own grandfather, etc.

Now, with general relativity you may (or may not) be able to create wormholes which change the topology of spacetime and bring previously distant locations close together. But I think it's sort of guaranteed never to be useful. I mean, we're talking planet-destroying bending of spacetime. Picture pinching a balloon to bring two distant points on its surface together. And you're still constrained to obey causality.

I think that the question we ask is all incorrect because if you think about the quantum physics, you wouldn't be able to sustain the load of particles inside of it. The only way to sustain a force of that kind of strength is to have negative amounts of energy inside, and is possible, but the force is powerful enough to destroy a moon.

Not the answer you're looking for? Browse other questions tagged science-based teleportation .

24
Settings formed by Uncontrolled Terraforming of Venus and Mars via Portals
4
In 'portal', pushing interconnected portals on thin portal sized rectangles of material through each other?
8
How do I reconcile portal mechanics for all situations?
5
(Please Someone Explain) Is time travel using wormhole as portals possible logically?
6
Parallel universe portals: an infinite hall of mirrors?
7
Why would an experimental portal system become connected with a portal system in a parallel universe?
7
How long and heavy can a tentacle tail get relative to the animal it's on?
7
Reactionless Drive WITHOUT Breaking the Universe?