Could an entire continent runs on a single fusion reactor plant by 2100?

Affected continent is Asia, the world is running out of coal and natural gas. A major mega structure project is underway, its goal is to provide electricity across the continent with a single fusion power plant buried beneath the seabed. Once this power plant is commissioned in year 2100 C.E. it will supply over 75% of the entire energy consumption in Asia and that's a lot of energy. Since it is inaccessible to nearly all and will be heavily guarded by advanced navy forces and a network of deep space satellites to provide 24hr surveillance, the power plant only required a small team to operate.

I'm envisioning a possible future setting when an entire continent shares a single power source, would such technology be possible by 2100? If so how would Asia shares the responsibility to keep it running?

The pink dotted lines are where the fusion reactors is buried. 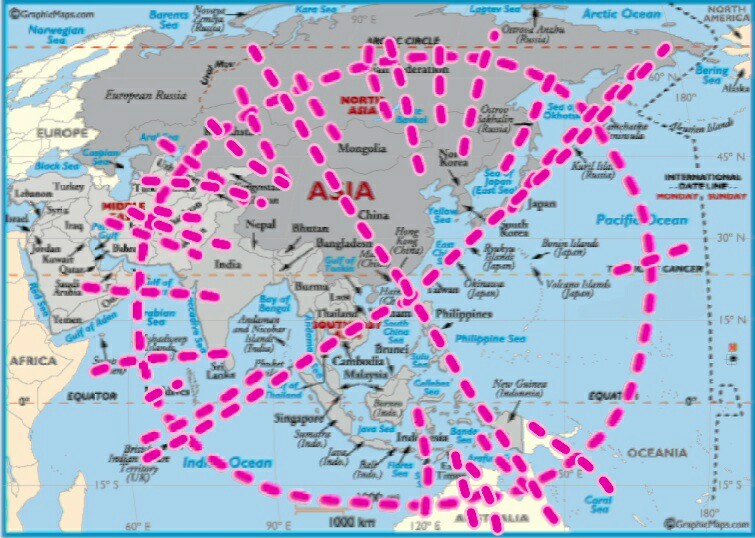 What will be Asia's energy consumption in 2100?

Can a fusion generator generate 11 TW?

For massive scale fusion power, the tokamak is probably the only way to go. There are a great variety of potential reactor designs, but the tokamak scales the best...by far. The premise is that you create a toroidal magnetic containment field and then heat fusion fuel inside of it to 10 keV or more. Fusion ensues, and once the temperature gets hot enough, the heat production exceeds the input requirements. You then extract the heat in some manner and generate electricity. A significant portion of this electricity would be needed to generate the magnetic confinement fields. Whatever is left over can power the grid.

Because of the magnetic confinement power requirements, a tokamak works best at the largest scale. If one is ever made, I would expect it to be on the 100 GW scale or maybe even more. It is not inconceivable that you could make TW tokamaks, and set up a group of them in one spot to generate the necessary power.

This is the question that you as the author will have to answer. There are three primary problems with tokamaks thus far.

First, D-D or D-T fusion produces very high energy neutrons. These neutrons will rapidly activate and embrittle the materials of the tokamak. There is no practical way to stop the neutrons, so either you will have to use a low neutron reaction (called aneutronic; some combination of H-1, He-3, Li-6; or H-1 and B-11). The other option is to develop materials that can sufficiently withstand the embrittlement for the decades of the life of the plant.

Second, the scale of the necessary magnetic fields is very large. In order to generate more energy than is required to operate the field, we would need better magnets than we are currently using. The big technological advance that would solve this problem would be better superconductors. With some advanced superconducting electromagnets, it would become much easier to generate the necessary magnetic fields to contain the very hot plasma.

Third, the understanding of magnetoplasmadynamics is currently insufficient. There are instabilities brought on by the fact that a plasma will have an induced current when exposed to a magnetic field. There is potential for Mega-Amp currents to develop inside the plasma, which will then create its own magnetic field and potentially result in a loss of containment. Solving this problem requires a lot of primary research in to plasma physics.

So can we have a tokamak by 2100? I'm optimistic that the answer is yes. The problems are significant, but reasonably well understood. Dedicated, persistent funding should be able to unlock the necessary physics in a few decades. A little engineering determination later, we could have a working reactor with positive net energy.

The first thing to note here, is why would you ever make a single reactor? Lets say we have average consumption of 11 TW, and peak of 15 TW. It would be best to have 5 installations of 4 1 TW reactors each, each in different locations. Single reactors are single points of failure. With so many reactors spread out, each facility could take one reactor down for maintenance and still meet the peak power requirements. You mention the seabed...I'm going to ignore that, that is not a good idea.

Since splitting the reactors is basically the only way to do it, they would likely be split between countries who would then sell power to each other. Russia, China, and India are obvious destinations for a powerplant; Iran and Indonesia would probably be next. You can pretty much divvy up the plants between countries any way you wish. If you insist on a single plant, I will tell you that a single plant powering Asia is extremely unrealistic.

Technically yes but I don't think it would make any sense from an engineering/political/military point of view.

Any machine has to undergo some maintenance and can never be trusted to run 100% of the time without any problem. Common sense would make you have a least 2 reactors for redundancy. On top of that, sending energy over large distances is costly unless you assume that supraconductivity has been mastered. You roughly loose 10% of you energy in heat dissipation to the resistance of cables per 1000km.

The country where the fusion plant is based has huge leverage over neighbouring countries. Do you think that China would ever accept a Japan based fusion plant or vice versa?

Again the single node argument. If an enemy country decides to invade Asia, destroying that single fusion plant would probably ensure victory. Even if it s heavily defended it still is an inferior solution compared to having multiple similarly defended smaller redundant sites.

Also why do you limit yourself to a continent, you might as well run the entire planet on a single fusion power plant if the arguments above are somewhat irrelevant in your world.

Not the answer you're looking for? Browse other questions tagged technology energy power-sources far-future nuclear-power or ask your own question.

3
Could we unintentionally induce a positive or negative charge on an entire planet?
6
A plant/fungus and an animal that form a single species?
3
How fast could a plant grow given unlimited energy?
2
How big/powerful would your fusion reactor need to be to power the engines of a 32km long starship?
1
In what way could advanced aliens transport the entire human race, except for three people?
2
Could a geothermal plant work for several millennia
24
Can there be a single technologically advanced nation, in a continent full of non-technologically advanced nations?
3
How could a fusion device be held at the centre of a ring-shaped space habitat?