What would be needed to travel through sand?

In a world geologically much like Dune, there's no less than 300m of sand above compacted sand-stone across the planet. An Earth example would be Rub Al Khali, where sands reach 300-350m above ground level. 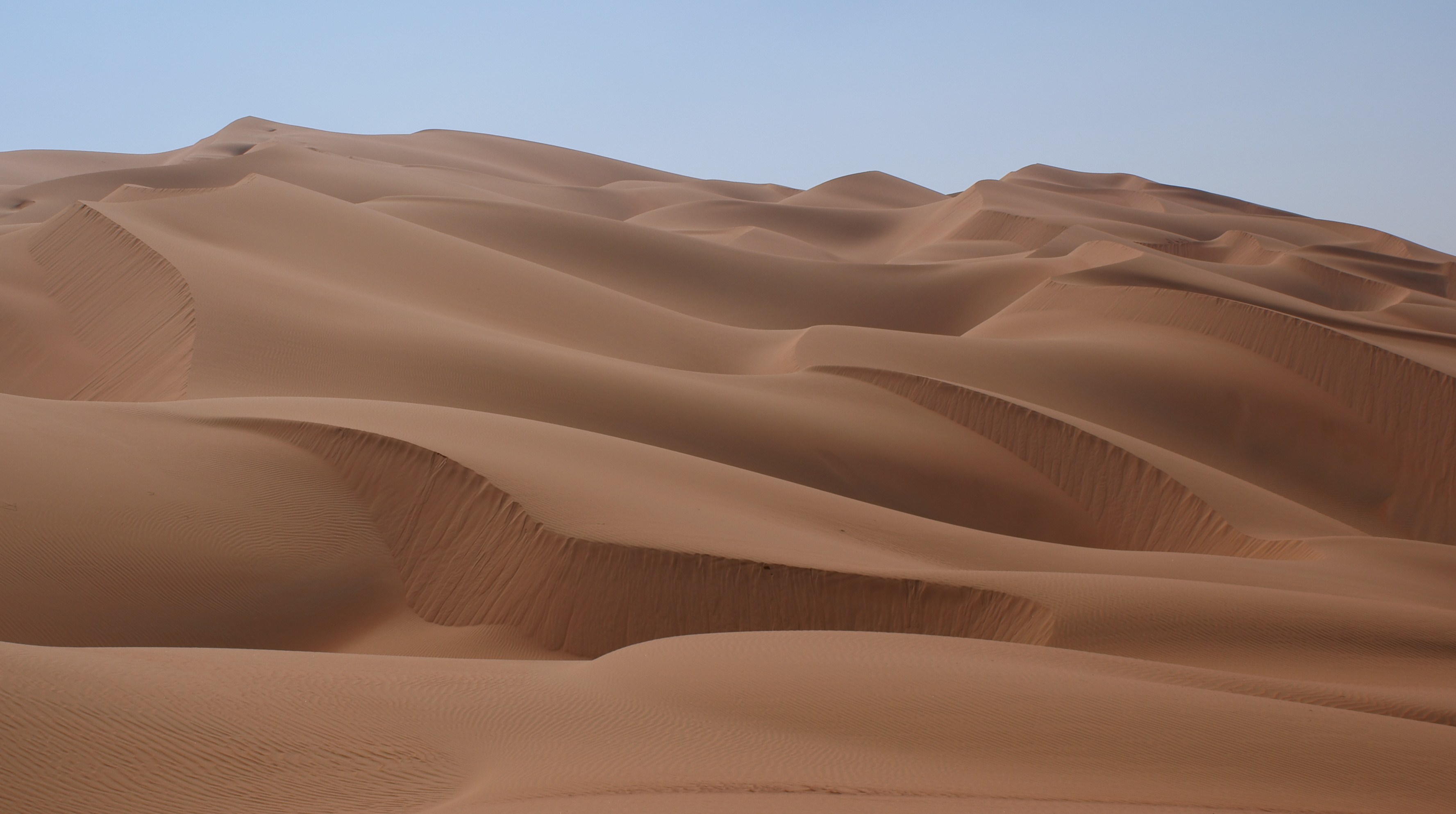 Cities ranging from 30,000 to 150,000 people are dotted across the planet. For purposes of travel, our protagonists need to travel under-sand, in order to avoid detection from orbit. Setting aside the technological issues related to the sustainability of the cities and the events going on, using our tech level, how can a crew of 30 people travel up to 50km at a time under sand?

EDIT: The detection is entirely by visible detection (no infrared, etc.) with a quality such as a 'live' google-maps.

Edited to expound on motion as it's unclear

Basically, it's a drill that instead of pushing aside the sand, it pulls it through its body and this would allow for minimal displacement to avoid visual detection unless you're quite close to the surface. As well, due to its motion, it should be relatively soundless and could carry quite a few people depending on its length.

This can be accomplished by a series of treads to pull the body along on the outside as well as pull the sand through the middle. They wouldn't need to be all encompassing as the natural flow through the middle should keep the sand moving just by the outer treads. The crew/personal (and possible even controls quarters would likely be best handled as an American football-shaped cavity that would be attached to the outer shell that pulls it along. This shape would allow the sand to flow around it while still being attached to the outer treads.

In all honesty, you could probably just take a submarine body and strap some treads to the outer shell to pull it along while providing a tube-like shape to move through the sand. The greatest disadvantage with either of these designs is that turning at any sort of speed is pretty much impossible and the only way any sort of turning is accomplished is through different tread speeds. Of course, you could also stop completely and just have one side of the treads moving forward and the other in reverse, but it's still going to be a slow endeavor.

Earth/Dune-type planets are nothing like Mars, our sandstorms are massive. One can use publicly available satellite imaging to plan the travel accordingly, so if there are only visible spectrum range satellites (or if the storm can block other wavelength), it will be very easy hide from them under the storm, moving along with it.

This traveling mode probably would allow the vessel to move half-"submerged" in sand while staying unnoticed, and if storms are occuring often enough, the vessel can submerge completely and wait for few days..

I am not sure that a digging machine should unavoidably leave a trail. Perhaps it is possible to avoid recognizable trail by digging deep enough. Or your planet could have giant wormlike animals, who make trails indistinguishable from the digging machines.

But a mechanical sandworm has to overcome some technical issues:

It seems to me, that such machine is possible, but will be monstrous and slow.

If there are no prebuilt tunnels, then your characters must dig the tunnel as they go, so you are talking about a Tunnel Boring Machine. The technology exists, especially when you think about using it to dig through sand. The main problems TBM machines have experienced in the past have to do with digging through rock.

Nor would such a machine necessarily leave a trail, if it is filling in the hole behind itself as it digs in front. If it is near the surface, yes, it will probably disturb things enough to leave a visible track. But if it goes deeper and fills in behind, there should be no question of leaving an observable trail.

I think you just need to do a little reading on TBM's.

Why set aside the technological issues related to the sustainability of the cities?
They actually solve your problem, quite nicely.

No need to go under the sand or use fancy tech:

Infrastructure is already in place

Major cities will already be connected, so your heroes simply must stow away on an existing transport system rather than spending the money to create their own.

Realistically, you would use the same approach opposing sides used during Cold War: if you know orbits and time of satellites passing your location, you can plan accordingly, and hide only when satellite is overhead. Then you can dig yourself down, and you won't need to go too deep.

The Channel Tunnel is a construct that stretches beneath the sea, from the United Kingdom to the European continent. In a desert world, as-the-crow-flies travel will be the most efficient (dunes aren't exactly great for travel) - and tunnels through the rigid / firm sandstone will likely hold, with the benefit of being easier to bore than tunnels in firm oceanic crust.

Some estimates put the length of the tunnel at 50 kilometers, meeting the mark exactly.
This is no difficult feat engineeringwise, and the tunnels will probably already exist - as direct routes between cities - for ease of access.

Of course, all of this hiding business is pointless. See my other answer "Infrastructure is Already in Place" for a better solution.

My answer may sound like a joke, but let's go anyways:

Travelling trough sand is incredibly hard. After all, it's all glass broken in very, very little pieces. Unless there is a very good reason to dig trough it all the way (other than "avoiding orbit detection"), I would recommend the cheapest, easiest way to go:

Give your crew 30 sand-bycicles (and a camo suit). 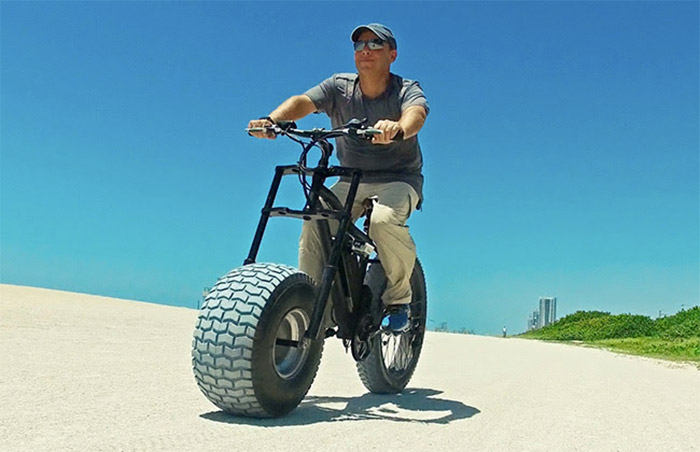 The trails left behind the bikes will be almost invisible from orbit, if not totally covered by small winds in minutes. And because they are very small (and sand-colored), the members of the crew would be nearly unnoticeable on such a large surface, on the contrary of a ship that would remove tons of sand and leave a giant trail visible from space.

50 miles a day by bike may be a lot if the crew is not trained however. On a flat surface, riding a bike 45 miles is about the same in energy requirement as running 5 miles or so. Sand dunes being made of... well, sand, I guess it would take some training to ride the same distance within a day, so it's not a trek for everybody.

Also I assume the purpose of the ship is not just for the crew, but for good and supplies too. Each bike can have dual bags on each wheel, up to 30 liters capacity by bag. That's already 60 to 120 liters of gear by person (depending of their respective weight and training). That can go up to 3600 liters of goods for the whole crew. And I'm not even talking about bycicle trailers...

Not the answer you're looking for? Browse other questions tagged technology transportation .

12
How would society be affected by ultra-highspeed travel?
2
What safety features are needed for an "awesome race of super horses"?
11
What features might a wind-powered ship designed for travel over sand have?
6
What sort bridle would be needed to ride a multi-headed carnivorous mount?
7
What would it take to make catapults a alternate way to travel?
3
How can travel between pocket realms only be possible through an inner plane?
3
What infrastructure would be needed to "farm" merfolk scales?