At what stage would we have detected sentient/intelligent life on the moon?

If the moon had life and it progressed at the same rate as life on earth, including key points of technological discovery. When would we, on earth, have first detected them?

There is no doubt that by now we would know they are there. We would receive the radio waves they emit. We have satellites that would clearly see their cities and road infrastructure.

Before that there could be electric lights lighting up at nighttime that could be detectable by powerful telescopes.

But in the past we wouldn't know they were there. So there is a point when the first discovery was made.

What point in technological advancement would be the earliest point where we would have noticed them without knowing they were there and realised that they were a civilisation.

Percival Lowell speculated that there was life on Mars based on (erroneous) observations of "canals" and what he thought were changes in the Martian landscape that could be explained by seasonal changes in vegetation. This was with some of the best telescopic equipment in the late 1800's, but as we know now, his observations were coloured by wishful thinking.

Observation of the Moon would be equally limited until very late in the Industrial Revolution when not only would we have telescopes of sufficient size and quality to make out larger surface features, but also they would also have started making very noticeable changes to the Moon.

Agriculture, especially large scale agriculture like the settlement of the west and replacing grasslands and open ranges with fenced in fields and growing new crops like wheat should make visible changes, especially during seasonal changes when the fields are fallow or new crops are growing in.

The invention of electric lights and urbanization would provide clear beacons for observers on Earth, and the Lunar inhabitants might also be making active attempts to signal the Earth if they are also as sentient as we are. 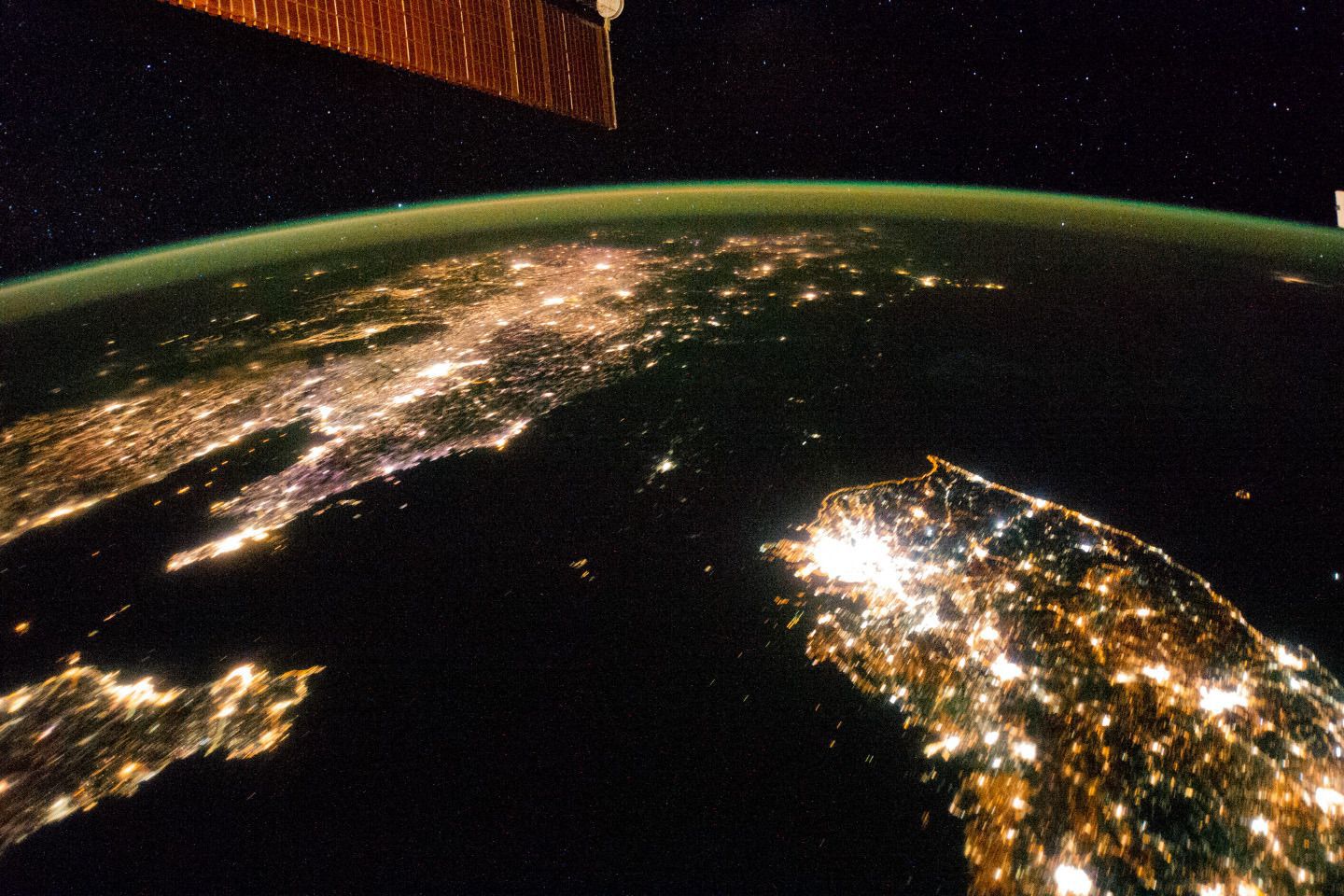 The Korean Peninsula at night from Orbit

Artificial light is very visible from space and we would definitely see that eventually. In early civilizations there generally isn't too much of it though, so it wouldn't become all that visible until the invention of light bulbs or good telescopes.

A more visible effect of human habitation would be agriculture. With the naked eye it's hard to tell cultivated land from plains, but people would have started mapping the moon very early on in history, and would likely notice forest lines receding and being replaced by agriculture. This would at least imply intelligent life, but there would be debate as it could just be forests naturally dying off. Still, this should be slightly visible to the naked eye and could have been detected and theorized as early as the dawn of detailed map making (Classical period). But there would be no confirmation of this until the invention of telescopes.

The presence of large scale civil construction like roads and canals would give hints especially if we can watch them forming, crawling across the landscape. But artificial light would be a big hint, even widespread campfires can give off significant light. All this would require the invention of telescopes on our part of course.

If there is obvious liquid water people would presuppose life, if not intelligent life, very early.

See this question on Astronomy.SE. Earth-based telescopes cannot see small details from that distance because of fundamentals of optics. Without primary mirrors hundreds of meters across, we won’t see their roads. Large scale features due to building cities (several km across) or changes due to large scale agriculture will simply be spots of a different color with no way to tell why.

Even if there is a geometric pattern that speaks of “living growth” we can’t tell if it’s beings or invasive bugs.

Maybe we’ll get lucky and see large-scale structures based on obviously intelligent patterns like prime numbers. But in general, I think we can’t be sure there are people there until large scale artificial lighting is rolled out.

Not the answer you're looking for? Browse other questions tagged earth moons life .

11
Would it be possible to terraform the moon?
3
What would happen to the moon if the Earth was captured by Jupiter?
3
With what precision & timing can we send a missile to strike the moon?
4
Does it make sense to have a world with a very quickly orbiting moon?
34
How would one design an undetectable nuke to hit the Moon with?
4
What would be the effects of replacing the Moon with an Earth-like planet?
4
First visible signs of human habitation on the Moon. What could we see from Earth?