Could a large gas planet have liquid rings that are dense enough to have watercraft in them? [duplicate]

I'd like to know the logistics of this. I mean liquid rings is not too far fetched if not very unlikely. But since the rings are far from the planet's surface what would the implications of gravitational pull be on actually being able to have boats in them?

Ignoring how all that mass got into orbit, liquid rings dense enough to sail a boat on need to overcome three problems:

The first two are about the mere existence of a liquid in orbit. The last is about it holding together as a contiguous dense fluid body against the planet's tidal forces. Temperature we can deal with by putting our hypothetical gas giant as close or far from its star as possible. The big problem is pressure.

What Can Be Liquid In Orbit?

The state of mater (solid, liquid, gas, plasma, and some more exotic things) is a function of temperature AND pressure. Make it too cold or put it under too much pressure, and liquid will turn to solid. Make it too hot or put it under too little pressure, and liquid will turn to gas. Liquids hold a small "just right" place. This is visualized with a phase diagram. 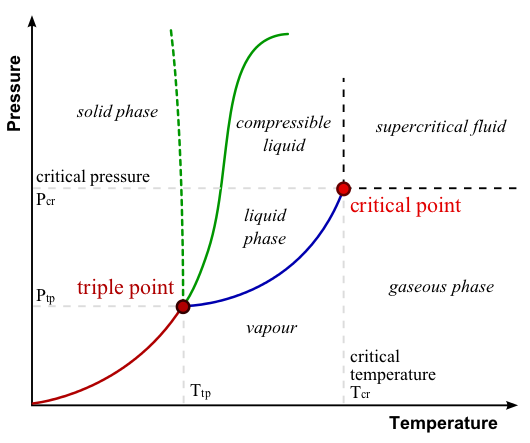 Pressure is the problem: there isn't a lot of it in space. Below a certain point of pressure and temperature you cannot have liquids; only solids and gases. If you heat a solid in a vacuum it will sublimate directly to gas. That's called the triple point, that dot in the middle, where a thing can be a gas, liquid, or solid. Everything to the left of and below it is a solid or gas.

There are also some anomalous materials, like water, who can be solid below the triple point, but only by a little bit. That's what that dashed green line represents, the behavior of water going from liquid to solid.

So we need something whose triple point lies near the vacuum of space and that is a problem.

Let's be generous and start with the pressure at the Kármán line, the accepted beginning of "space" at 100 km above the Earth's surface, as the pressure we have to deal with: 3.2e-5 kPa or 0.0000000032% of surface atmosphere.

What has a triple point below 3.2e-5 kPa? Looking at this table of triple points our options are Mercury and Ethanol. There may be more exotic materials we could use, but for the common stuff that's it.

Mercury has its triple point at 1.65e-7 kPa well within the near-vacuum of outer space, and at a temperature of 234 K which is about -40C. This is plenty feasible to remain liquid in orbit around a gas giant.

Mercury is also a good choice because it's chemically fairly non-reactive, so you might be able to find it in its elemental form.

The problem with mercury is it's a heavy metal and thus fairly rare in the universe. The Earth's crust contains only about 0.08 ppm (parts per million) of mercury. Even Earth's riches ores are only a few percent mercury. Getting an entire ring of it around a planet dense enough to sail a boat on is very unlikely by natural or even artificial means.

Even better, ethanol is a fairly simple combination of carbon, oxygen, and hydrogen, very abundant in the universe. It occurs naturally in outer space. Getting enough of it together to form a ring is feasible.

We have our material! Now, can we have it in a ring?

The reason rings exist is because of gravitational tidal forces and the Roche Limit. If you have a spherical body like a moon orbiting a dense body with high gravity like the Earth, that moon will feel a slightly greater tug on its side near the Earth and a slightly less tug on its side further away. The side closer will have to orbit a bit faster, and the side further away will have to orbit a bit slower.

The Roche Limit of a spherical fluid body in orbit can be approximated using the ratios of the density of the two bodies. 2.44 R1 (P1 / P2)1/3. The density of ethanol near its triple point is about 8.7e-12 g/cm3 (water at standard temperature and pressure is about 1g/cm3) while the density of the Earth is 5.5 g/cm3 and Jupiter is 1.3 g/cm3.

Unfortunately this is for a spherical body. Calculating the thickness of a ring is beyond my capabilities. So I'll leave this answer here for someone else to figure out.

Can You Float On It?

Well... no. Not conventionally. As @SRM correctly points out in the comments you can't float without an acceleration pulling you down. Usually that's provided by the force of gravity while you're standing on the surface of a planet. Since both the boat and the ring are in orbit, they're both in free fall, so a boat would just orbit on its surface. Its not floating, it's just in the same orbit.

However, with no vessel to contain the ethanol, I believe the boat will cause the ethanol to spread out laterally rather than provide buoyancy. Though I'm not 100% sure. Maybe with enough ethanol relative to the size of the boat its own force of gravity can hold it together. However, given how sparse ethanol is in near vacuum, 12 orders of magnitude less dense than water at standard temperature and pressure, that would have to be A LOT of ethanol. Perhaps ethanol on a solid core of a dense material would work.

This is where the Roche Limit becomes a problem as you're essentially putting a liquid torus in orbit, make it too thick and too close and it tears itself apart. Put it further away and its mass increases as its circumference increases.

If its core is solid that adds another problem, solid rings do not have stable orbits. Since one side of the ring will be ever so slightly closer to the planet than another it will feel a bit more of a tug than the opposite. That will drag it a little closer increasing the pull of gravity, while the far side moves further away decreasing it. Eventually, one side of the solid ring will crash into the planet. Some sort of active stabilization will be needed, though how you do that through probably kilometers of liquid ethanol I'm not sure. Complicating things are all those thrusters on all those boats providing thrust in all different directions. I don't know how fast this will all fall apart, could be days, could be centuries.

Again, at this point I've hit my limits. It is gorgeous to think about looking down at the surface of a "lake", seeing the Earth reflected in it, and looking up to see the Earth itself.

Alright well I'll make a few assumptions, such as; the liquid is water, it is somehow not frozen.

If these conditions are true then yes, the rings could be dense enough. 'Could' because it is however extremely unlikely, and will vary massively on the size of the planet-hence circumference of the ring.

If the rings are dense enough you do however have several other problems. Assuming the watercraft is air tight, you'll still have the problem of gravity which means the watercraft is slowly going to be pulled towards the centre of mass (the core of the gas-planet). Also it will be difficult to remain in the water or get traction since it is zero-gravity.

To conclude it would be virtually impossible in reality but if the ring was liquid it would still be extremely impractical. A space station near the rings is a more realistic alternative.

4
Can I have a planetary liquid or gas ring system?

12
Can a moon “skim” a ring?
9
Could the moons of a Gas Giant all be habitable if that planet was in the habitable zone?
20
What would the sky look like in the SHADOW of planetary rings?
5
Is it possible to have a volcanic planet that is survivable by a human?
13
Liquid water on both sides of a tidally locked planet. Feasible?
6
Making a slow orbit around a large gas giant
2
The effects of gravitational pull in a solar system with a pendulum Sun
3
I want a layer out of frozen clouds floating around my planet. How could that work?
52
If a large space ship crashes on a planet, what could kill passengers without obliterating the ship?