How much would it cost to build an orbiting “Princess”?

Constructing a network of luxury spacestations around Earth should be next 'space race' endorsed by every government as a gesture of good faith. Corporations such as Princess-Carnival and Walt Disney have successfully managed with minimal political developments.

The question: "What cost factors and technology should be provisioned in constructing at least 12 luxurious spacestations in orbit over Earth?" 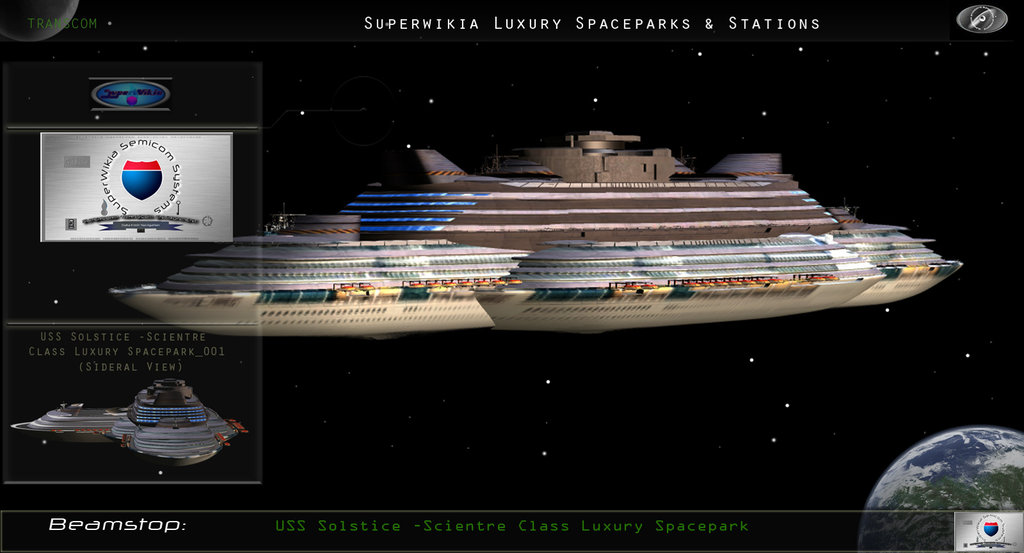 Current methods of reaching space are both dangerous (2% chance of loss of vehicle and all hands with the Space Shuttle, I think 10% with some cruder rockets) and expensive (US\$1M-US\$10M per person per flight). That being the case, you'd definitely need to solve both of those problems before anyone would seriously consider trying to build a hotel — either someone (SpaceX?) solves the problem of reusable spaceflights, or someone builds a non-rocket launch system (space elevator, launch loop, skyhook, and others: take your pick). With the cost problem solved, you probably don't need to mine asteroids. But you might want to anyway, just because then the people visiting the hotel can touch something literally older than the Earth.

From a safety point of view, a large metal sheet the same cross-sectional size as the hotel, but dozens of kilometres ahead of the hotel in the same orbit, should solve most (but not all) space junk problems without blocking the view. Given the famous colour of space, you could probably get away with painting one side of it black and having it much closer, say 500m ahead, which gives protection from much more junk… but I'd have to actually run a simulation to tell you how much of a difference it would make.

The windows themselves, if they were real and not just a hologram showing you what you would see if there was a window, would probably be a honeycomb shape reminiscent of medieval 'leadlight' glazing to minimise atmospheric loss if there was a puncture. It's already possible to create force-fields on the scale of inches that can hold air out of a vacuum chamber, but they're ridiculously power-hungry — 8 kW/cm diameter for a circular one — so you'd want to improve that by a significant margin and add it as a backup to each individual section of the window (and, indeed, on a hidden honeycomb structure inside the hull) to keep the air inside in the event of a hull breach. (The current method being "don't have a hull breach, but if you do, evacuate" works for a single space station filled with trained astronauts, it's nowhere near good enough for dozens of hotels filled with rich bored civilians).

Zero-gee can cause motion sickness, so better treatment of that would be a good thing.

I think the biggest problem would idiot-proofing the stations so that a drunk guest cannot accidentally kill themselves, everyone on board, or randomly de-orbit the station onto an unsuspecting city.

Given demand for the internet, you need much higher bandwidth communications than we currently have with the space station. This is fine, switch from radio-frequency to optical lasers — both are the speed of light, but higher frequency visible light is much easier to focus tightly than lower frequency radio waves, and a tighter focus means more bandwidth. Research is already being done on this for interplanetary missions, but I don't believe it's in current use.

On the topic of lasers, given that a well-aimed 1-Watt laser on the ground is visible on the ISS, it might be a good idea to laser-proof the windows to avoid the guests being blinded by angry plebs/the 99%/terrorists/etc.… this may involve coating the windows in Handwavium. Annoyingly, rockets launched from the ground with the intention of destroying something in orbit are vastly easier to make than rockets capable of reaching orbit (orbit is more fast than it is up, and you only need to go up to hit things that are going fast), so there would have to be some sort of rocket-defence system for similar reasons.

Radiation protection is important, but straightforward if you can afford to build things on this scale: just laminate water (neutron absorber, but emits gamma when it absorbs neutrons), lead (high-Z elements absorb gamma well, but re-radiates it at lower energy because it's soft), and iron (not as good at absorbing gamma but better at turning it into heat), then everyone's fine. This stuff is extremely heavy, of course, but you need low cost to orbit just to get started.

And finally, mould is also a problem in space stations. You definitely don't want any of that on a premium space-hotel!

With such a big project. It may pay off to send a small, automated craft to the asteroid belt, capture an asteroid with the proper resources and truck it back to earth Red Dwarf style while mining the materials and starting to build the stations. When it's close to home, the human operatives could come aboard with the rest of the materials and finish the construction.

For that you would need excellent robot workers in constant communication with the human engineers back on earth, and a particle emission based propulsion system capable to push an asteroid.

In order for the guests to have a good view of the planet with the naked eye from the windows, the stations would have to orbit much closer than geostationary orbit, and politicians would object to such big object "looming" over populated eras, even if it's just for fear mongering. You would need a light, resistant material, guaranteed to burn off in case of reentry to make up most of the station. Such as the external panels and internal structure.

As mentioned you would need big windows for your guests, otherwise they would feel like they are in a zero-g warehouse. Therefore you need glass that can protect them from radiation and micro-asteroids as well as the normal panelling. Maybe throw in some Magnetic Field generators as an extra measure for your clients peace of mind. After all, sometimes satellites are exposed to radiation when intense solar storms push against the earth's magnetic field.

18
How much stuff could we get into Earth orbit for the start-up cost of initiating asteroid mining?
28
How would we build Earth Mark II?
17
How large would an orbiting structure have to be to be largely unexplored after 100 years?
0
How much sunlight would I need to block to stop / reverse climate change?
6
How would you build a realistic Le Palm D'Orbit?
5
How Close Can We Build Solar Collectors to the Sun?
2
How much sunlight can I get into my O'Neill cylinder and how much light needs to be artificial?
11
How much of the sun's light would have to be blocked for the Earth to become uninhabitable?