How to introduce Artifical Humans into American society without causing the end of the world. How to do it?

In my setting a team of scientists have created humanoid robots that mimic Human anatomy near-perfectly. The robots are sentient and can be replicated easily.

So my question is... How could the team of scientists introduce these robots to society without a World War breaking out?

Here's a list of how the robots body's are structured:

To restate my question: How do I introduce these robots to the world WITHOUT starting WWIII

There's a funny effect in human psychology called the Uncanny Valley. As things become more and more human like, there is a sudden shift where we start to find that thing utterly repulsive before it gets human-like enough for us to appreciate it 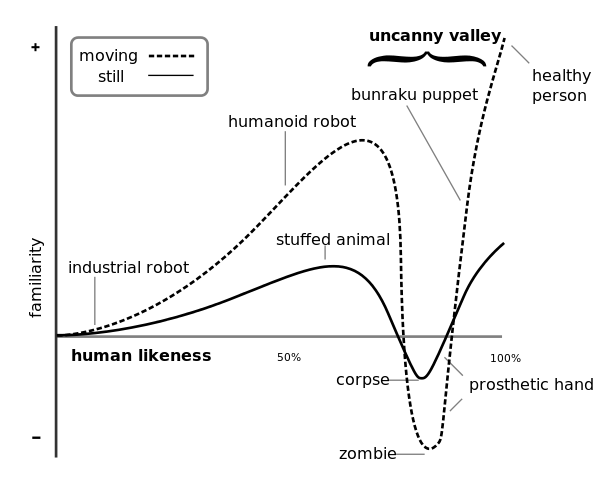 Between the rubber skin and the lack of a respiratory system forcing them to have a very alien way of speaking (mechanical speakers?), I would expect your robots to fit square into the valley.

Introduce them as servant beings, then after everyone gets used to them, have a few notable ones achieve freedom, and then eventually encourage everyone to free their robot servants. Encourage people to give them paying jobs, and to serve them as regular customers, especially for shelter and energy needs (food/electrical/etc.).

As a sidenote, Overwatch is an interesting franchise for this question, because they're currently going through a similar thing in that world.

Not the answer you're looking for? Browse other questions tagged society robots .

2
How could robots ever be accepted into human society?
8
How does "growing up" in a robotic species work?
7
How would/could a communal society introduce currency?
3
Impact and Implications of Pregnancy-Inducing Healing
1
Anvillicious Illnesses: Too lethal for humans?