Imagine that you need to fill-up a 4D unit hypercube with 3D unit cubes of water.

At first, I thought you'd need an infinite amount, arguing that it would take an infinite number of stacked 2D squares to fill up a 3D cube.

But then, I realized that given that each square had zero height, an infinite number stacked on top of each other should still have zero volume. Essentially, one can't talk about the volume of a 2D object. Similar reasoning can be applied to argue that 3D matter cannot fill up 4D space, regardless of whether it is infinite or not. Is this reasoning sound?

Consider these hypothetical scenarios: suppose a unit cube of space, relative to Earth so that it 'moves along' with the planet... suppose, a unit cube of such a space submerged in the oceans opens up into a 4th space dimension. Assume that the surround universe is not immediately destroyed.

Basically, I'm writing a story about a 4th spatial dimension interfering with everyday life, and trying to make it as logically coherent as I can.

Look at space filling curves. You can apply the same idea to filling a 4th dimension with a 3d ribbon.

You still need an infinite amount, though.

You might also consider how 3d matter exists in the 4d world. Just like sheets of paper (or even ink on a sheet of paper) in our 3d world is not really 2 dimensional but meerly extremely thin in the 3rd dimension, you can postulate that the 3d objects, in order to exist at all in the 4d realm, are actually paper thin in the 4th dimension rather than having zero extent.

See my answer to interactions with higher dimensions for details. Of note:

you don't have to stand beside something at w=5 inches for example to push in the −w direction. The physics is not "closed" over the domain of the dimensions of the current arrangement of particles. Effects can operate at right angles to the participants. That is the general thing you see with cross products. Gyroscopes would produce torque in that direction, electromagnetic effects would have more right angles to reach out to.

Disclaimer, none of this should be regarded as proof since it's all theory.

A 2D entity simply can't view its existence from a 3D perspective. Just like we are incapable of imagining viewing something from the 4th dimension, quite similarly how we cannot imagine a color outside our spectrum simply because it's outside of our perceived reality.

A 1D object simply has one dimension, "forward" and "backward" along a line. (so to speak)

A 2D object has two dimensions, "forward", "backward" and "side-to-side".

A 3D object has the dimensions of a 2D object with an added "up" and "down",

Now, some argue that the 4th dimension is "time" but that does not quite represent the entire picture.

So, A 4-dimensional being would be viewing their universe as an infinite number of 3-dimensional "projections". An "angle" or perspective we are simply unable to comprehend, the same way a 2D being is incapable of comprehending the angle a 3D being would observe it.

However, for us to comprehend this fourth dimension, the fourth dimension needs to be presented in a "3D" format. The interstellar movie had a pretty good take on this, as can be seen here:

Essentially, the fourth dimension would be presented as infinite instances in 3 dimensions; "up, down, forward, backward, left, right", that we would be able to traverse.

But that would mean that we would perceive it as only one instance, the one we are currently in.

In regards to OP's question:

If this theory is correct, your 4D cube of space would not "fill up" or suck water into it. It would probably merely be an infinite number of instances of the same water. (through time? maybe? nobody knows)

The thing is that you have to realize that there is no such thing as a 2d object. Even sheets of paper, no matter how thin, are 3d. Looking at it from a 3d perspective, we live in a 3d world and all objects in it are 3d. 1d and 2d are theoretical constructs that we use to incrementally understand our universe.

Here is another thought experiment to help you think in terms of four dimensions - Our perception allows us to look "backwards" through that time axis, so we can "see" an object projecting back in time. I can see my car out in the parking lot, and I have a vivid memory of it when I was getting into it in my garage. But our perception does not allow us to look forward, so we do not see the extent forward of an object in that time axis, but that is ok as a backward look is sufficient for this experiment. Now, look at your computer; it's there. Then remember it at a time before, and realize that you are looking at a 4d object.

Your reasoning is sound. This is impossible, almost by definition of what a dimension (and multidimensionality) is.

If it did have N defined dimensions, then it would be an N-dimensional object.

As for your hypothetical scenario's, we simply cannot say. As it stands, we perceive the universe as having exactly as many dimensions that we ourselves consist of.

Every object with a different amount of dimensions (points, lines, planes, 8-dimensional space) are all just abstract theoretical constructs. We can reason about them, we can make representations of them, but we can never truly see one.

Hmm. Do you really need to "fill up" 4d space, or do you just want 4d objects?

If you just want 4d objects, that's easy. First note that you can create 2d objects from 1d objects. Behold the triangle

a rigid 2D object made from 3 1D objects. In 3D, we get the tetrahedron 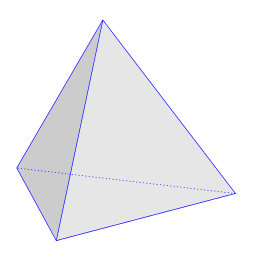 a rigid 3D object made from 4 1D objects. We can even get to 4D this way. Behold the 5-cell

a rigid 4D object made from 5 1D objects.

So, you only need 5 1D objects to make a 4D object. If you insist on using 3D objects, there are other ways you glue them into rigid 4D objects. It won't fill 4D space, but it allow you to make rigid objects.

I think you are right with the 2d analogy. Draw the vectors. How can a 3d object produce a vector force into a 4th dimension? You are right about the stack of squares too. A bummer thing about the infinite number of third dimensions is that you (3d person) would not be able to see from one to the next unless you give light some special properties.

Other weird thing is that all infinite number of stack of squares are in the same place. There is no order to them. If you have infinite number of 3d dimensions and you leave yours, be sure to take your stuff with because you are never finding your original one again.

A cube of arbitrary dimension that is higher than 3 can be 'filled' with 3-cubes (but not with 2-cubes or 1-cubes, no analogy with Peano and Hilbert). This is a so called 3-cube theorem proved in the forties by L.V. Keldysh and published in 1957. Find a place to read about it.

The article is hard to find and written in Russian, but see this summary.

Not the answer you're looking for? Browse other questions tagged alien-geometry or ask your own question.

12
Expanding your empire's space from the inside — can it be useful?
4
Interactions with higher dimensions
6
If one of the spatial dimensions wrapped around, how would architecture be different?
3
Geography in a universe with 4 spatial dimensions
2
Is there a plausible way to exchange matter between spatial dimensions?
6
At what scale would negative curvature be noticeable (and a nuisance to the flat space society)?
17
How can orientation-discriminating people keep their views when it turns out they live on a non-orientable surface?
8
How does the air remain stationary in The Big Blue?
11
How would crystals be different in hyperbolic space?