Basically, I am looking for variables in travel for the same ocean or sea journey, along the coast, but in the opposite direction. No motors, just standard 15th century ships. I am building a world with ocean currents and wind variations, so I'd like to get an idea of the impact on travel time.

If both the wind and the current help get them there in one direction (say it's a three day journey) how badly can it hurt them coming from the opposite direction, where they will be against the wind and current? How can I build the ocean currents/wind in my world near the coast to get this effect, if it is even realistic at all? Please see the clarifications/details below

I know that a great many things factor into this, and I don't have a good knowledge base as far as sailing is concerned, so just a basic math thing given a 10mph boost for wind and another 10mph boost for for a gulf stream and then make a -20 mph to the other direction is far too simplified, I'm sure. I can build in "dead zones" which can be traversed by the momentum gathered by the wind and current, which can't be travelled in the same way from the other direction, right? If there are analogous travel zones in our own ocean (where one direction is super quick and the other is very very slow), please let me know--my google fu is apparently weak today!

As a standard example of sailing routes in UK waters, below is a map of the route taken by the Spanish Armada in 1588. Source

Once they'd gone up the Channel the only way back was round the North of Scotland and down the West coast of Ireland. The winds and currents around the British Isles say that this is the only way to do this. Effectively you can't sail the other way round as there are strong currents round Dover, and you need a ship capable of a certain minimum speed to actually make it round the point and into the Channel even if the wind is with you.

You can also look at the historic transatlantic routes which follow much the same sort of pattern as this follows the prevailing winds and currents as shown in the maps below. Source 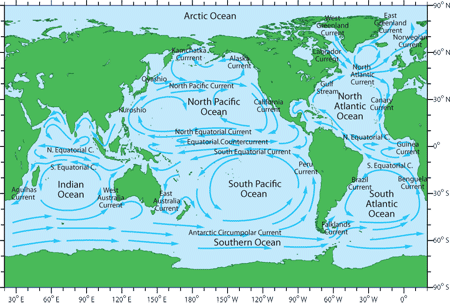 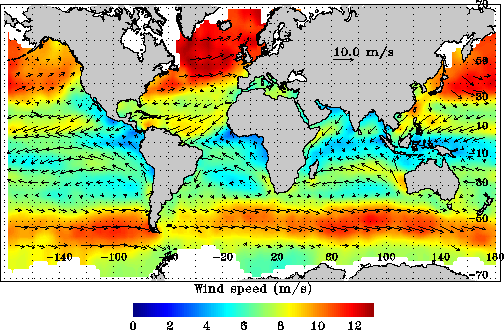 What these maps also show if you look at the Southern Ocean is that there's a clear correct direction for sailing round the world giving you a significant concept of sailing the wrong way round the world.

Related to the concept of sailing the wrong way, you can also see that on the return trip to Europe from India/China/Spice Islands, you need to sail close to the Cape of Good Hope so as to not have wind and current against you. Meaning that tales of bad trips round the Cape still hold today for those sailing the wrong way.

The best known deadzone is called the doldrums, officially called the Intertropical Convergence Zone, it's an area with no wind around the equator. It's possible for a sailing ship to get stuck for days or even weeks in glassy seas.

Known to sailors around the world as the doldrums, the Inter-Tropical Convergence Zone, (ITCZ, pronounced and sometimes referred to as the “itch”), is a belt around the Earth extending approximately five degrees north and south of the equator. Here, the prevailing trade winds of the northern hemisphere blow to the southwest and collide with the southern hemisphere’s driving northeast trade winds.

Big sailing ships don't carry a lot of momentum and we're talking an area that's a full 10 degrees North-South and runs all the way round the world. Once you're stuck there you're stuck until the wind comes back.

Modern ships are powerful enough that wind and currents are just one factor among many. Historically, that was different.

Some of the other answers cover the winds on the open ocean. Those winds are more or less constant; the same winds go in the same direction the same time of the year. Prominent (historically) among winds are the Atlantic North Equatorial current and corresponding winds, which runs straight across the Atlantic from the Canaries to the Caribbean and took the initial explorers and conquistadors to the New World, and the season spring-fall monsoon winds of the Western Indian Ocean which moved ship commerce between India and Arabia and East Africa.

However, the biggest cause of delays were port conditions. There are three factors to consider.

There were generally two types of rigging, square and lateen. Lateen rigging allows a ship to tack 'into' the wind, allowing it to make slow progress directly against an oncoming wind. It also improves maneuverability. However, it provides poorer performance 'running', that is going with the wind 80 degrees or more abaft the beam. A running lateen sail's yard will be extended outwards over one side of the ship, to orient the sail perpendicular to the wind. However, if the wind shifts direction by a few degrees, the forces can attempt to switch the side that the yard wants to project on. A rapid shift of the yard will cause the ship to 'back' removing forward momentum; the swinging yard can kill passengers, destroy rigging, and even flip the boat.

A square rig is much safer, and better at catching the wind too, when running. All the big ocean-going tall-ships of the Age of Exploration depend on the square-rigged sail to cross oceans; it provides more thrust per sail area, less rigging to handle, and is stable in conditions of steady following winds.

Lateen rigging is preferred in more geographically compacted seas with more variable winds, such as the Mediterranean. In the Indian ocean, the Arab dhows with their lateen sails were quickly driven out when the Europeans showed up with their larger square-rigged sails.

The big advantage of a lateen rigged ship is that you can get into an out of a port under many conditions. Since a port is designed to be protected from ocean swells, it is almost always in some sheltered location with limited access to the open ocean. If there is only one direction you can go to get to the open ocean, then it is entirely possible that there is just not enough wind to get there.

This brings us to the last point, tides. Under certain tidal conditions, you would not want to get underway. Certain tidal estuaries can have very high currents at different points in the tidal cycle. Examples that I have seen personally include Lisbon (5 knot currents in the estuary) and Lagos, Nigeria (where I had to order an ahead bell while mooring due to extremely high currents in the lagoon). Despite that fact that I sailed a ship under power, with tug assistance, these operations were both dangerous and would have been better avoided.

The real problem is the combination of tide and winds. If you can only leave port at high tide, then you would get your crew aboard every day at high tide and see if the wind was right. If it wasn't, you weren't leaving that day (its not like you'd get underway at night). Send the crew ashore for some drinking and wenching, try again tomorrow. This could go on for weeks.

Coastal sailing is not done at night in the ancient world. Perhaps if the moon is full, but generally there is too much risk in running aground. If you want to keep going at night, you have to get out into open sea. That means coast-huggers use lots of temporary anchorages (or haul-outs where they beach the ship, if it is a galley, see The Odyssey) while hugging the coast from point A to point B. A wise captain will know the winds and tides and predict good places to hang out overnight so he can start right away in the morning. A foolish, inexperienced, or unlucky captain will not.

Roman records in particular are filled with travelogues of the varying calamities that can cause delays. Most prominent among them are delays leaving port, and delays caused by being trapped in a temporary anchorage.

A very important thing to consider is this: In sailing (especially 15th century sailing) travel speed is, very roughly, wind speed minus drag.

Wind speed is directed. So you cannot simply sail against the wind, you would just end up sailing backwards with the wind.

With some smart usage of angles, the keel and whatnot, you can sail in a direction something like 45° into the wind (with 0° being the wind from the front and 180° being the wind from the back). This means the total length of your journey just increased by sqrt(2). Still, roughly speaking, but the principle holds. Also, you can only make use of a part of the power of the wind. a lot of how much you can use depends on the geometry of your rigging, but at that time you can guesstimate that it won't be more than half.

you are now at something like 2*sqrt(2)*original travel time.

Now d the same for currents, and you have a ballpark guess at what your travel times will be.

One note, though: wind has a tendency to blow towards a shore, or off a shore. This is because when the sun shines on land, air above it will be heated up, expanding and rising, and at night the ocean, warming slower, is warmer than the land, so now you have warmer air above the ocean.

That said: your setting where the main wind blows along the shoreline is not very plausible. The current, though, is quite feasible.

Not the answer you're looking for? Browse other questions tagged ships sea sea-exploration ocean .

3
How fast a current can ancient water way travel overcome?

23
Ship design that could navigate on the edge of an incredibly strong vortex
17
Self-sufficient Ark
15
An Aztec ship sails east - where does it land?
4
Are my ocean currents passable?
20
How to cross a metallic sea?
3
Temperatures and water level during very long eclipse
12
Passive distancekeeping for sea platforms
4
Are these ocean currents realistic for a planet that rotates 16 times slower than Earth?
36
Would oceans filled with long-lived, omnivore, intelligent Krakens make sea travel impossible?
8
Sailing Ships For The Vārẽn Sea