Let's say that a patient is in hospital suffering a terminal disease or at least a physical injury that's very expensive to treat. The only hope of salvation is to have artificial, or cybernetic, DNA injected into the injury. The unexpected side effect is that the injection won't stay in the injury itself but rather spread through the body, strengthening the bones and tissues, sharpening the senses and censoring pain. The patient would still look like a normal human, walk like a normal human and even talk like a normal human, but his internal anatomy would be a confused blur between organic and mechanic.

This is, of course, a sci-fi scenario, but the question regarding the scenario is this--does it teeter on the Star Trek degree of plausible (believable), or on the Star Wars degree of fantastical?

The wrong premise but the right idea

As Mołot and Peteris has pointed out: there is no difference between "natural" and "artificial" DNA. So your premise is wrong in that DNA is always DNA, no matter its origins.

What you want is an effect — Patient Hapless getting augmented to near super-human levels — and you care less about the fine details, right? So the solution is...

is a collection of processes by which a cell identifies and corrects damage to the DNA molecules that encode its genome. In human cells, both normal metabolic activities and environmental factors such as radiation can cause DNA damage, resulting in as many as 1 million individual molecular lesions per cell per day.

So Patient Hapless has had some really bad luck with their DNA. It is broken, and broken pretty badly. Perhaps Hapless wandered into a sterilization chamber or accidentally got in the way of an illegal medical experiment. Hapless is still upright and walking, but in a few days they will die, horribly. Hapless needs their DNA repaired and quickly.

Luckily there is a new experimental method whereby nano-bots are injected to fix your DNA, augmenting the body's own DNA repair mechanisms now that they are overwhelmed with practically every strand of DNA shredded. Some experiments with this have gone slightly awry but now it seems they have gotten a handle on this method.

The nano-bots are programmed with a healthy sample of Patient Hapless's DNA, to act as a blueprint and guide on how to put the strands back together in the right order. In theory, and in the lab, this has worked perfectly.

Enter our old friend Murphy. When programming of the nano-bots, someone used the wrong file. Instead of being programmed with Patient Hapless's DNA, they were programmed with another DNA file... from The Project That We Shall Not Speak Loudly Of.

This makes no sense.

Artificial DNA has the same basic structure as natural DNA, to be able to interact with enzymes that produce protein. 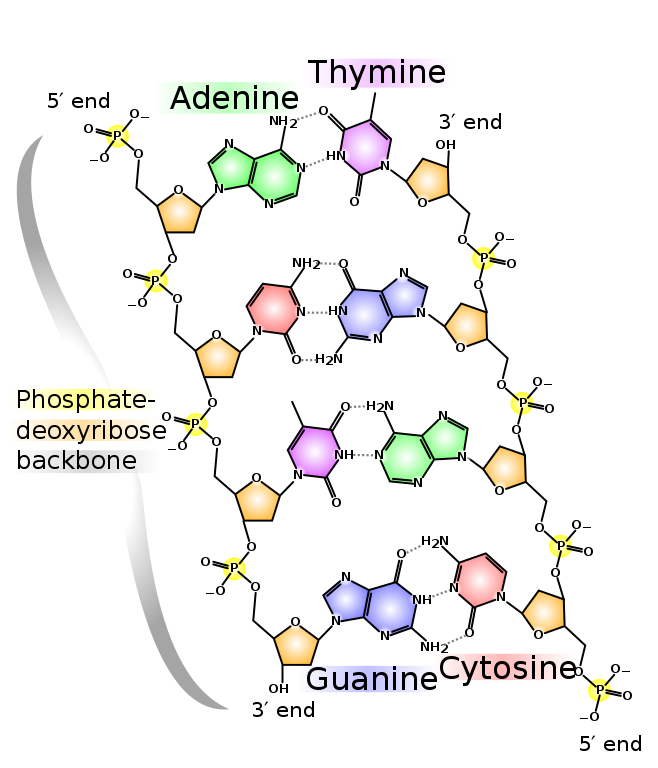 In no way DNA can encode "confused blur between organic and mechanic." - all it encodes is protein and control instructions. So you might get a surge of growth hormone, or testosterone, or neurotransmitters in your victim. You cannot have brass, steel or anything like that!

And free DNA is not the most effective way to induce effects in patient, you usually want some vector for it, but that's a whole another story.

Artificial DNA is the same as regular DNA

If you simply state "artificial DNA" then this would generally mean a DNA that's DNA, but made artificially. Such DNA can be made, and is made, and can be used in e.g. retroviral therapies to alter genetic expression in cells.

You don't get mechanic anatomy by anything DNA-like

All DNA does is encode instructions that are used by cells to make proteins. You might encode different "letters" into a DNA-like molecule to generate something different, but that "something" would still have to be "built" by the existing ribosome machinery - it can build very different things, but not anything that would be called "mechanic anatomy"

The spread can't be a surprise

No matter how your treatment works in the end, it may be possible that "the injection won't stay in the injury itself but rather spread through the body", but it won't be "unexpected". If the nature of the treatment is local (e.g. injecting a limited amount of new cells in a specified location), then it is local. If the nature of the treatment is one that affects all cells that it reaches (e.g. retroviral therapies), then it would be expected that it will spread out through most of the body.

This idea make Star Wars look sane. However, if we really wanted to dig at it, there may be some room.

The first step would be to do away with the idea of "cybernetic DNA." As others have pointed out, that concept is meaningless. However, what if it were a brand name for something that isn't actually DNA. The purpose of DNA is to encode RNA to make proteins with. Perhaps your product isn't so much DNA, but rather a very small cybernetic machine which produces RNA for various chemicals. Thus, while not actually DNA, it would fulfill the role of DNA, giving some credence to the name. Such a small nano machine would be handwavey, because DNA is already pretty small and efficient, but that would be closer a Star Trek grade handwave.

Spreading could be a mistake. There would have been some compound or signal preventing the nanomachine from operating outside of its intended environment. At this scale, all sorts of strange things can happen. The nanomachines would need to be able to transport themselves through the lipid bi-layer of the cell wall to get to their intended target, because you aren't injecting one machine into every cell in the wound. Maybe something went awry.

I don't think you'd see a "blur between organic and mechanic." One of the major differences between the two is that organic is designed to be constructed and operated in situ, while mechanical devices are created elsewhere and transported in. Any artificial process you used here would fall into the former category, so it would have an organic feel to it.

I think the hardest part of your plan may be sharpening the sense and censoring pain. These two desires are rather conflicting. While we don't know exactly how pain works, I would expect that censoring pain would dull the senses. This is what happens with painkillers. There's just not a strong enough line between the two neutral pathways. Perhaps it might affect the Cingulate cortex, considered to be the memory hub for pain, but it does a lot of other things too

Injected DNA wouldn't be sufficient to treat the kind of disease or injury you're talking about. I'd guess you might have better luck working with nanites that actively repair the body, a sort of engineered virus, or a living parasite (eg https://en.wikipedia.org/wiki/Toxoplasmosis).

You could plausibly make any of these work to get the effect you seek.

I dont see real artifical DNA do the job for you (as explained in many answers), but having nanomachines with corresponding builders might make it possible:

Have the nanomachines do the job of the normal DNA plus Ribosome and maybe some other functions of other biological cells (for example virus or cell(vs cancer) destruction), so they would be able to make the proteins with a different structure from the one defined in the DNA. If they couldn replicate from the materials in the blood it is possible that they spread and grow to large quantities. They could also help with wounds by building a protecive a layer or helping in the healing process.

which means that you CAN transfect a piece of (specially designed) dna into a cell, and have it churn out nanobots, that could in turn build (or be build the necessary (inorganic) nanomachines that builds) inorganic nanostructures within your patient/victim.

With most modern Programming/Production standards, that usuall translates to nanoconstructed/3d printed structures that closely resembles inorganic, metal based modern technology, instead of biological tissues that are similar to the patient/victim's. for example, brains based on clockwork/electronic computers, hearts based on centrifugal pumps, muscles based on electric/pneumatic/hydraulic/electrostatic motors, lungs based on batteries, stomachs based on chemical plants/composters, etc.

Result: Because the existence of modern, biobased nanotechnology, it is entirely possible to encode, including apparatus for building, a (very sophiscated) robot with a (fairly small) strand of dna, which was (of course) artificial, being coded rather than evolved, and unfold it through expression within a cell. Which would take over the host/victim/patient's body if not limited, or the limiting step have failed/gone wrong.

Not the answer you're looking for? Browse other questions tagged technology science-fiction genetic-engineering nanotechnology anatomy .

3
Could a giant battery serve double duty as a sadistic acid bath?
2
What sort of cybernetic/genetic enhancements would make sense for cold-blooded soldiers leaving their natural habitat?
69
Is there a real life substance like movie acid?
13
How could an acid-cow make a barrier against acidic milk by synthesizing PTFE, and what would it line?
8
What type of acid could burn through skin and any type of metal?
31
What caused the end of cybernetic implants?
3
Xenomorph-like creature but with a Base instead of Acid as blood
4
Mounting a cybernetic prosthetic arm