The Western Birds--Ideal Substitutes to the Penguins?

Anytime one thinks "flightless bird" and "aquatic bird" put together, one would immediately think of Sphenisciformes, the penguins.

But during the Late Cretaceous, there swam a different kind of flightless aquatic bird, one with a greater distribution than the penguins' cold southern waters. They were the hesperorns, the "western birds". 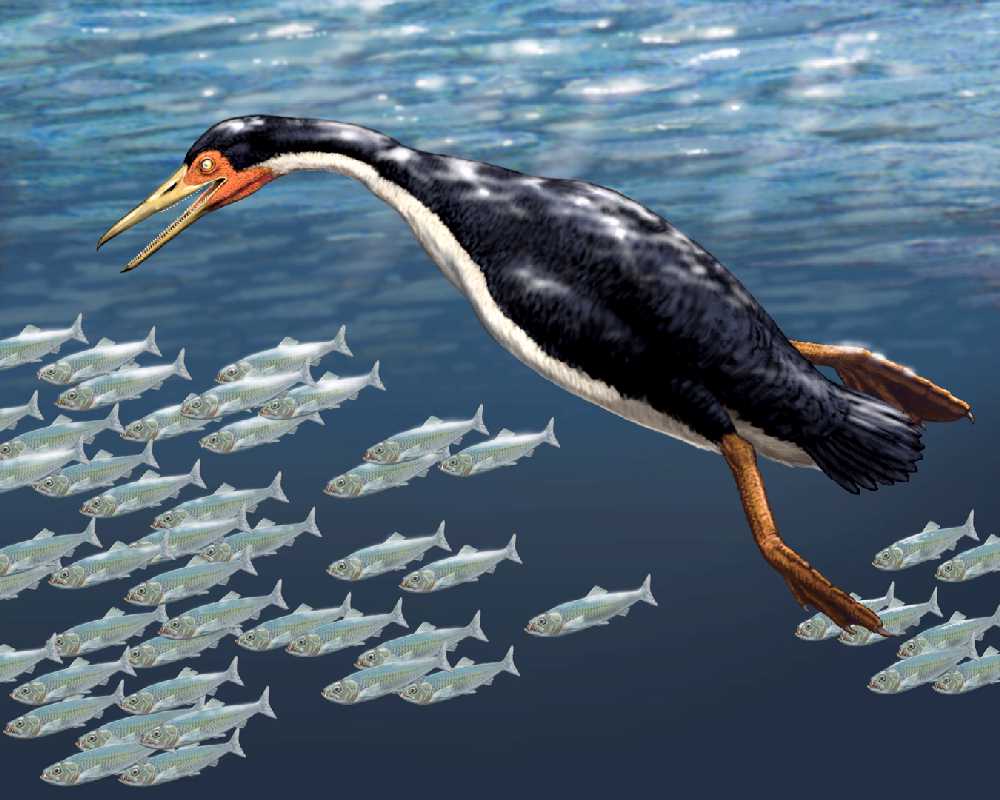 As you can see, they were lankier and more streamlined than their penguin upstarts, which raises the question.

In an alternate Earth where penguins never existed or have yet to exist, colonies of hesperorns can be found in coastlines all around the world. (Wouldn't nip the existence of the pinnipeds in the bud, but they would be confined to the shadows.) There are hesperorns in Antarctica, a continent buried under a mile of steep, slippery ice. With that in mind, would the Antarctic hesperorns keep their ancestral sleekness, or would they have to shorten their body designs to make them more penguin-like?

Penguins are stout because

The bird you picture there looks like a cormorant. Cormorants work just fine, and live in all sorts of primarily tropical and subtropical environments.

However, if these birds (or cormorants) were to adapt to an Antarctic lifestyle, they would need fat layers for insulation and lower their surface are to volume ratio to reduce heat loss.

Really expanding on kingledion's answer, evolutionary pressures will lead to what is known as "convergent evolution".

The issue is the environment requires some very specific adaptations to fill the niche of aquatic predator. Since the prey is underwater, a streamlined hydrodynamic shape is required to be fast enough to successfully hunt. Since the waters and surrounding air are cold, the creature needs some means to retain body heat. Penguins who had these traits passed them on to their offspring, while those who did not starved or froze to death, and had fewer or no offspring.

We can see this in multitudes of natural examples. Sharks, Tuna, Ichthyosaurs and Dolphins come from four very different evolutionary paths and are entirely different species, yet have all evolved similar shapes in order to be top marine predators in their environments. Wolves have similar looks to extinct Thylacine, or Marsupial Wolf. A browse through the biology section of the library will turn up numerous other examples.

Going the other way, there have been species of penguins that lived in New Zealand some 25 million years ago that were large and skinny instead. Since they lived in warmer climates, their need for insulating fat or a low surface to volume ratio was limited, while obviously being large bestowed some sort of competitive advantage, perhaps in fending off other predatory species or being able to hunt larger prey.

So depending on how specialized the evolutionary niche is, expect your species to converge towards an "ideal" solution regardless of the starting point in evolution, given enough time and how rigorous the conditions actually are.

Not the answer you're looking for? Browse other questions tagged biology evolution avian adaptability or ask your own question.

1
Using birds to lift a cabin to the air
23
Would we notice ridiculously healthy birds?
6
What are some assumptions we could make about the linguistics of a civilization evolved from birds?
7
How do the buildings of humanoid birds differ from human buildings?
10
How will birds be different on a <1g world?
29
Psychedelic Death Birds
4
How would Levers or Switches look, in a world of Birds with expandable beaks?
13
Plausibility Check: Armored Birds
9
How do sapient birds/theropods build their seats?
14
Can birds evolve without trees?