One of my local TV stations re-broadcasted Rambo II last night and that got me thinking.

That compound bow is really cool.
It is relatively compact to carry around, because the limbs can be detached from the central handle part. Certainly less cumbersome than lugging a longbow around.
The pulleys (or cams, whatever you want to call them) make it less strenuous to keep an arrow ready at full draw.
That is all good.

In my fantasy setting I've got humans, elves and dwarves around. My elves would really love those compound bows.

Tech level is late renaissance up to just prior to the steam engine. Dwarves and elves are both very good at metallurgy and could, in my setting, work aluminum, magnesium and various alloys. (In that aspect they are a century or 2-3 ahead of the tech-level.)

Would my elvish artisans/crafters, maybe with a bit of dwarvish help be able to build such bows? Any suggestions for alternative materials would also be appreciated.

P.S. It is the bow I'm after, with normal arrows. I don't care about the explosive arrow-heads as used in the movie.

It's possible, with some changes to history.

The biggest obstacle in making a compound bow is the cam system. Simply put, there are a lot of things that can go wrong with it. It took until 2005 for someone to design a twin-cam system that wouldn't need frequent tuning, for instance. There was nothing in this design which couldn't have been invented by Leonardo da Vinci; there just wasn't much of any experimentation with pulley-based bow systems until the 20th century.

However, in a world where clockwork was used significantly earlier, leading to the development of more mechanical weapons, it's not inconceivable that the idea could have arisen around the Renaissance. (Consider the Antikythera mechanism: a clockwork device with differential gears, from the second or third century BC. If that sort of technology had been more widespread, clockwork might have become prominent significantly before Renaissance times.)

Without the cam system, there's not really a point in having detachable limbs. The strength of a non-compound bow comes from the bow itself acting as a spring; finding a way to make the limbs detachable, while keeping the entire bow sufficiently springy and not breaking under stress, is not trivial.

If your dwarves are able to work aluminum, which is a notoriously difficult metal, the materials themselves are less of an issue. You may not be able to make wood as strong and light as fiberglass, but it can certainly be stronger and stiffer than is conventional for a longbow. Or even hollow metal components might be used as a substitute.

The compound bow is a modern invention. The patent was published in 1966 (after about 6 years of "garage" development) by Wilbur Allen. So your elves are well ahead of the real world here.

It was the invention of modern materials (fibreglass, modern glues) that enabled the bow to be built. The development of other improvements to bow such as torque stabilisers (giving a culture of "improvements in bows can be made"). And an interest in bowhunting - requiring a bow with a 60-70lb draw weight. In other words, the time was ripe for a compound bow in the middle of the 20th century, and not before. (source: http://sagittarius.student.utwente.nl/artikel/compound/comp1.html)

Horn, sinew and other natural materials have some excellent properties, as does yew wood. It would not be utterly unbelievable for the dwarfs to build compound bows and if it suits your story you are free to take wood from the Manus vibro tree, which is as strong as steel and as light as paper. If your dwarfs already have aluminium alloys much of the hard work is done.

There is the issue of beauty. I think compound bows look plain ugly, compared to a longbow. But beauty is in the eye of the beholder.

The first compound bow was made out of wood anyway. 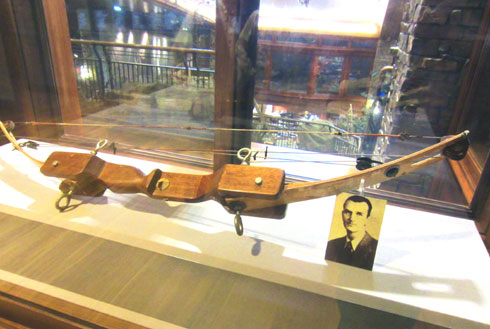 The cams and could easily be made of metal, and that's the only thing made of modern materials, everything else is made of wood or simple metals.

They will not be common however, they would cost a fortune and they don't offer any real advantage over a crossbow and can't be made super compact like the modern ones.

The primary advantage of a compound bow is the limbs can be much stiffer than regular bows (which are essentially "tension" weapons using the spring properties of the bow limbs to store energy). Essentially, less energy is being put into the movement of the limbs and more into the bowstring, and hence the arrow.

While this may not have been expressed in those terms in the past, bowyers had plenty of empirical experience in this, and crossbows (especially steel crossbows) of enormous power were developed in the same time period that you are looking at, although instead of cams, the archer used a crank to draw these bows. 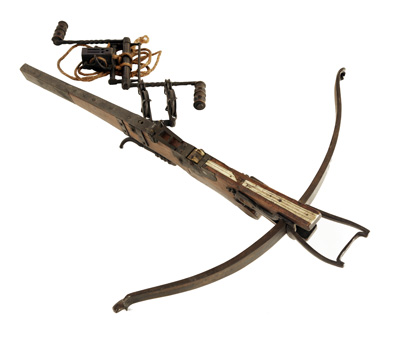 The evolution of bows was cut short by the introduction of gunpowder weapons, but a steel crossbow drawn by a crank has a very slow rate of fire, giving the archers only one chance to shoot at rapidly advancing horsemen (and even a limited number of shots at dismounted men at arms advancing on foot), so the pressure would be on to find a way to make drawing a steel crossbow faster while keeping the power of the huge draw weight so the quarrel can penetrate steel plate armour.

Now, a genius like Leonardo da Vinci could have conceivably developed a compound steel crossbow (as a polymath, he would already be aware of the mechanical advantage derived from pulleys and transmission systems, having developed several of his own), so without alternatives like firearms and a strong demand for rapid fire weapons to deal with fast moving armoured battlefield threats, he might have eventually hit upon combining the mechanical advantage of cams or pulley systems (although based on what we know about Leonardo, it is equally possible that he would have come up with something totally different......) 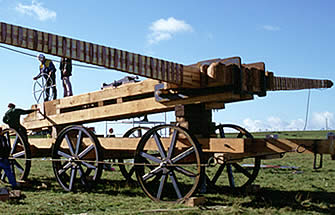 "Compound" crossbow? Whatever do you mean?

So given the conditions of needing a very powerful bow and high rates of fire to neutralize heavily armoured and fast moving battlefield targets, the "desire" for something along the lines of a compound bow will exist, but you would need a polymath with experience in weapons design and mechanical systems who can concptualize "how" these two ideas can come together.

You would not even need dwarves and elves; the first compound bow was made out of wood.

Regardless, the thing that prevented compound bows from being invented until the 20th century was that people just plain did not know how the necessary physics worked. As a result, they could not have a "eureka". They had the proper techniques to make one, they just simply did not know how to make one.

Not the answer you're looking for? Browse other questions tagged technology weapons renaissance .

10
Is it possible to make pulleys and cams required for compound crossbows with medieval or early renaissance technology?

8
What level of tech if there was no copper?
7
could oil rigs or similar structures be constructed with Industrial Revolution level tech?
2
Stay with me here... energy rifle-sword made scientifically feasible
4
Arquebus muzzle velocity, and how to balance it with bows and crossbows
5
Would building a large underwater dome be possible with European Renaissance technology?
30
Minimum tech level required to outrun a terminator?
5
Lowest tech level for a civilization to widely produce fake meat