What would the sky look like in the SHADOW of planetary rings?

Background: I'm writing a nomadic society that lives in the shadow of their planet's rings. These rings are as wide as possible to grant them the biggest shadow. The planet has an incredibly long year to give them time to travel as the shadow moves. I know some have already asked what the sky looks like from the surface of the planet in general, but my story is set entirely in the shadow.

What does the sky look like from within the shadow? Is the sky closer to blue or black? Day or night? If the rings block a sizeable amount of sunlight, but not all, would they simply experience the equivalent of a cloudy day, with extraordinarily bright nights? If the planet has a few small shepherd moons in the ring plane, would they be visible in the shadow?

I think the result will be very similar to what happens here on this Earth during a solar eclipse. I like this quote from http://www.eclipse2017.org/2017/what_you_see.htm:

You'll get the shrinking sliver of Sun, which is kind of cool but is not the real show. As the sliver thins, though, you get the very weird atmosphere that surrounds an eclipse, which is very difficult to describe. As the sliver of sun gets thinner and thinner, the sky darkens a bit, and the light around you takes on a weird, "clearer" quality. Everything seems sharper and clearer, though darker. It's kind of like if you were squinting, and everything seemed much clearer to you. It's very strange, and it's a very powerful effect on your senses.

Whether your world gets this full effect or just a partial effect, such as what one will see if not directly on the line of the eclipse, will depend on the density and opacity of the particles in the rings. Even a partial eclipse produces a similar sensation.

I barely remember the one in 1979, and I am greatly looking forward to the one upcoming. What I do remember was that it got dark, but not really. You could still see outside, not at all like at night-time. The sky was blue, but more like navy blue than the normal azure. Like the linked article says, it's really hard to describe- it's just, weird.

You can try an image search of sky during an eclipse, but the photos don't do justice to being there. If you're in the right place, you just have to wait eight months to get your full complete answer.

For reference, here is an image of Saturn, where you can clearly see the shadow cast by the rings on the planet's surface: 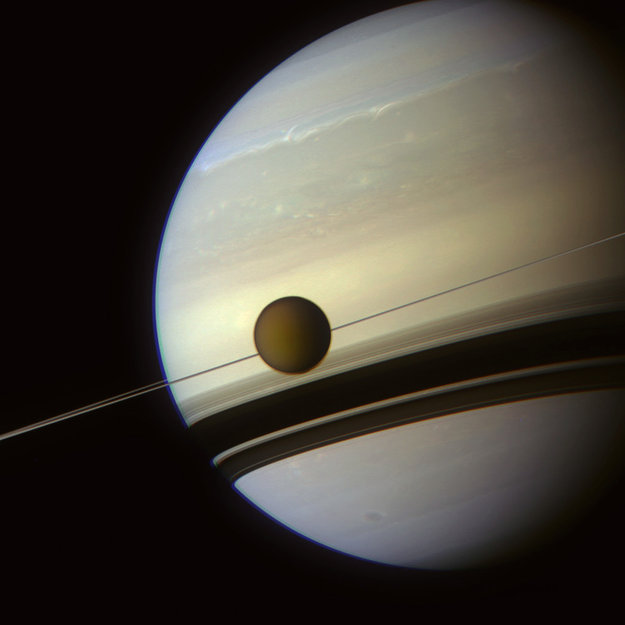 As you can see, the shadow is quite dark. It's also quite wide. If you were standing in the middle of that shadow, at that time of year, the sun would be entirely covered by the rings for many miles in every direction, and you would only see whatever glimmers of sunlight were able to penetrate the icy mass of the rings. The sun would appear as though shining through a cloud - how heavy a cloud is up to you, as it depends on how thick the rings are. With the shadow as wide as it is during the time of year depicted, there would be no glow around the horizon as is described during a total solar eclipse on Earth, because everything for many, many miles around falls under the same shadow. The rings themselves, though casting the shadow, are backlit by the sun and so appear as the brightest thing in the sky, stretching from horizon to horizon in a glowing arc.

Another important thing that you'll notice in the picture is that the ring shadows do not run perpendicular to the planet's axis of spin. This means that, during the course of a day, you won't stay in the same place relative to the shadow, and will possibly experience gains and dips in brightness as you move past gaps in the rings. To illustrate: 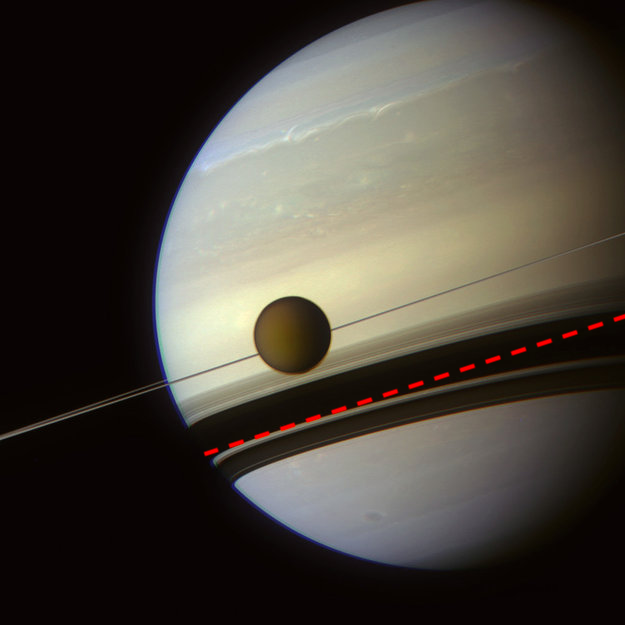 The red dotted line shows the course that might be traveled by an observer standing on the planet's surface who is trying to stay more or less in the rings' shadow, as the planet spins around its axis over the course of a day. As you can see, in this particular case, there is a time around mid-day (just under that moon) when the sun edges close to a gap in the rings (i.e., the observer passes close to a gap in the shadow). From the surface, this would be experienced as a bright glow approaching from the southern horizon, and perhaps the edge of the sun beginning to peek out from behind the "cloud". Your nomads may want to time their travels so as to avoid any such gaps, or at least to encounter them around evening, when the sun is less bright. On the plus side, the timing of these bright spots will be a handy navigational aide to let them know if their travels are on schedule.

Of course, everything changes as the planet moves around its sun throughout the year. The rings move north to south and back again as the seasons change, growing wider and more curved as they move away from the equator and dangerously narrower as they move close. I'm guessing that your nomads are following the shadow of the rings because they don't tolerate sunlight well. In that case, there will be two times of the year which are difficult for them. During the spring and fall equinoxes, the rings will be oriented edge-on to the sun, and will probably not be wide enough to cover the whole disk. Looking up, you will see a glaring sun with a dark line through it, shining down with perhaps 90% of its full fury. At these times, it might be necessary for the nomads to travel only at night. Since they are by definition always staying on the winter side of the planet, these spring and fall times are also the hottest seasons of the year, even were it not for the waning protection of the shadows.

One more interesting thing: because the rings (Saturn's rings, at least) are largely made of ice, it's possible that you would get cool optical phenomena like this, if they're thin enough for the sun to shine through:

Expect this especially during the solstices, when the shadows (and the nomads) have traveled to near the planet's poles, and the sun passes through the rings at its most oblique angle.

In addition to the dimming effect, also consider the effect of larger rocks/moons within the ring. Chances are the sunlight would constantly be flickering as larger and smaller satellites passed by, partially eclipsing the sun.

There might even be a cycle or pattern to the flickering/eclipses based on the orbital period of the rings. Maybe one section of the rings happens to have a greater number of large bodies, so every X days there is a day with a large partial eclipse every half-hour or so. The nomadic society could use this phenomenon as part of their calendar.

Cobaltduck is on the right track with the idea of a solar eclipse but now that it's been a year, I can tell you how it was when I was actually at the eclipse.

For starters until the total solar eclipse it is impossible to tell that something is passing in front of the sun by looking at it. The only real "sign" is a continuous dimming that happens around you. This dimming is most equivalent to being in a sandstorm or a hazy day in that everything seems to get a little darker and redder. The exception is that usually when you get this kind of dimming your vision decreases from the particulate matter but during a partial eclipse it stays as clear as the day you had before.

The sky itself creates a fun phenomena during a total eclipse where the area covered by the shadow is dark and almost night like (stars aren't really visible to the naked eye but bright planets can be seen) but the areas outside the shadows, on the edges of the horizon, are still a bright daylight blue (assuming that the day is clear). During a partial eclipse the sky does darken a little and lose its colr but it is still mostly blue but takes on the same hazy feeling as the rest of the area. So the way the rings looks can vary from just a bit dark to black then depending on the size of the shadow the edges of the sky will still look normal.

As for Shepard moons their shadows would cause partial eclipses as the pass over the sun unless they are big enough to cause a full eclipse. Your nomads likely wouldn't see it however as Shepard moons create gaps in the rings that would create strips of lightlight your nomads would avoid.

Not the answer you're looking for? Browse other questions tagged science-based planets astronomy planetary-rings or ask your own question.

6
Slowly Sculpting the Planet - Sky within a Red Dwarf System (Cont'd)
1
How to naturally maintain a Earth-sized Planetary Ring System and the possible periodic bombardment that can ensue?
13
Does a planet's axial tilt and seasonal progression affect a planetary-ring system, as seen from the planet surface?
2
Could a habitable tidally locked planet have a day and night cycle caused by the eccentricity of its orbit?
0
With an extra bright moon hanging above us, would stars still be visible in the night skies?
9
How can I tell what my ringed planet will look like from the surface?
3
Consequences of a two-mooned system losing the one closest to the planet?
0
Consequences of dark planetary rings?