If Our Horses Came From the OTHER Subspecies

It has become common knowledge among mammalologists that the origins of our most iconic rides, the horse, stemmed from the tarpan, a breed of wild horse that became extinct as recently as 1909 CE.

Which leaves us one last variety of wild horse, and the focus of this question: 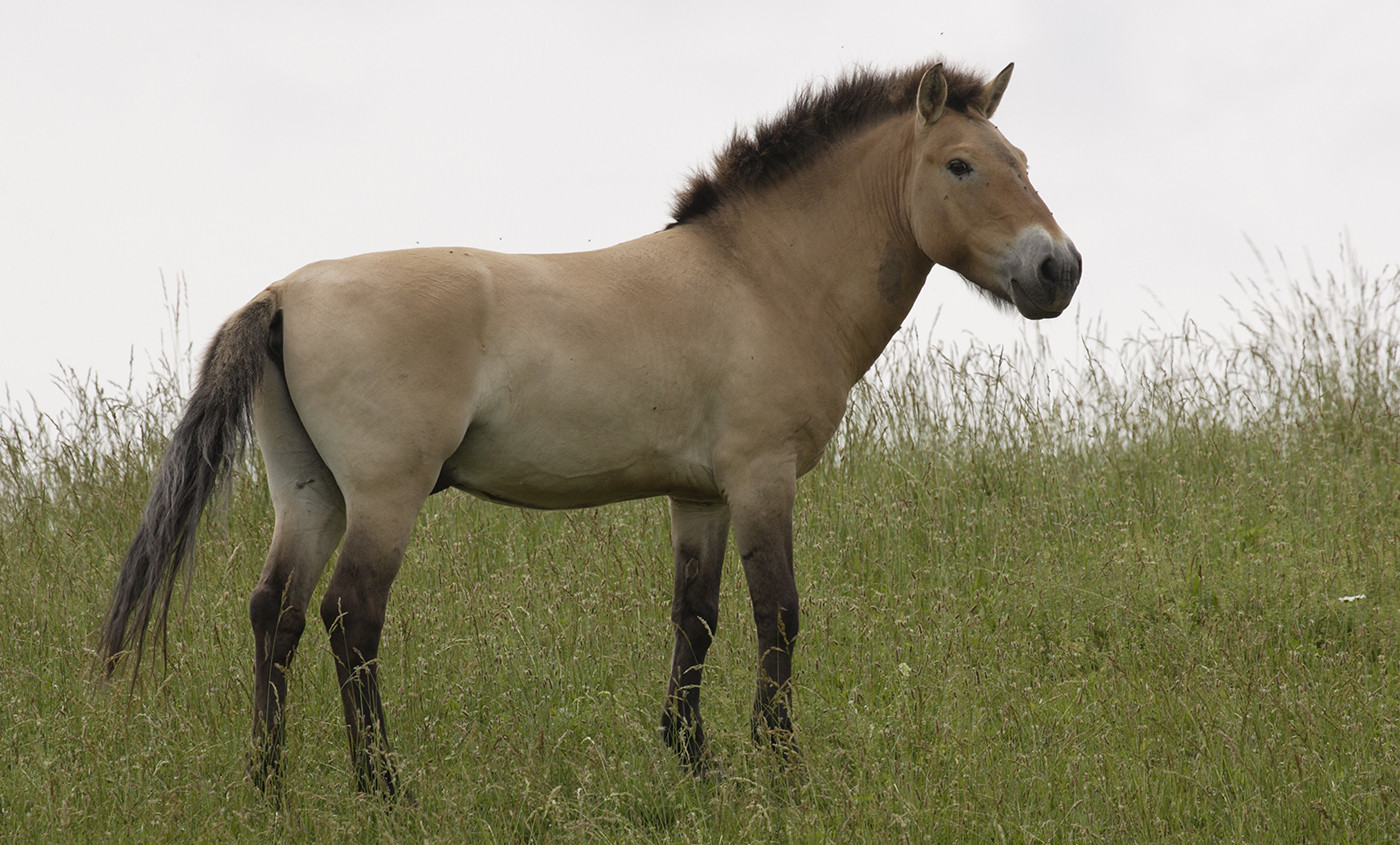 Przewalski's Horse, once a common sight in the steppes of central Asia, then declared extinct in the wild in the 1960s before making a comeback as recently as the 1990s.

In this alternate scenario, many thousands of years ago, it was this horse, not the tarpan, that men manipulated into the domestic horse that rode their masters on their backs. In comparison to tarpan-descended horses, what sort of anatomical and behavioral differences (if any) would I expect to see from a horse descended from Przewalski's?

Why don't we ride zebras?

I will answer your question by answering a different, but related, one: Why don't we ride zebras?

The zebras are further away from modern horses than the Przewalski's horse, but is still a species under the Equus genus. They look like horses and can carry up to 350 kg weight, so why don't we ride them? Short answer: they can't (easily) be domesticated.

1. Will breed in captivity. This is highly crucial, if you can't breed them in captivity, then you can't influence the traits of the species since you can't get the two nice and calm horses (or whichever animal you want to domesticate) to produce offspring.

2. Fast growth rate. They need to reach adult size within a reasonable time, such as less than 5 years, in order to be as useful as possible. If they take long time to reach maturity, then we will get less food and work output for the time and energy invested in the livestock. It is also a requirement for proper breeding as you will want the animals to have more generations born per human generation so you can selectively breed those animals with the best traits quickly.

3. Proper diet. We need to be able to feed it with what we have, so a picky eater will be problematic to feed. Horses, cows, pigs, dogs and other domesticated animals are not particularly picky. Horses and cows eat grass, silage, grains, while pigs and dogs eat almost anything.

4. Manageable size. Very large animals require a lot of food and space, which means that there would be a lot of time spent getting food for the animal as well for the human families. For grass eaters, all you really need is a large enclosed field where they can graze. However, it will become cumbersome if they require too much food, especially in colder regions as you need to prepare and store food for the winter. Meat eaters need to be relatively small to consume reasonable quantities; a lion, for example, requires 5-7 kg meat every day, which is not that insanely much, but it means that you would need to keep a lot of other animals to use as food for the lion in the long run. Dogs, on the other hand, require generally less than 0.06 kg raw meat/kg 2 per day and can eat other things than meat.

5. Good temperament. One needs to be able to trust a domesticated animal to a certain degree. If they are likely to become angry and attack for no reason or if they are likely to panic, then they are difficult to handle and difficult to domesticate. Horses and deer are prey which flee at the sight of danger, which is a trait which needs to be removed by selective breeding (tamed horses still have a tendency to panic, but we have largely managed to calm them down as a species). Lions and tigers are large enough to potentially consider humans food and therefore pose a threat.

So, how does zebras fulfill these requirements?

They have all points, except number 5, because zebras are stubborn, mean bastards. They are highly unpredictable and while we have attempted to domesticate them, they have been too difficult to work with. Another reason is that, aside from their looks, they have no qualifications that outperform a horse so no one had bothered with the effort of truly taming and breeding away all the nastiness in the zebra. It has simply been too much of an effort when we already have horses.

How does all of this relate to Przewalski's horses?

The Przewalski's horse is the nowadays only living true wild horse, it is currently red-listed as endangered since it was extinct from the wild, but later reintroduced from captivity. It is related to the domesticated horse but have, as it is a true wild horse, never been domesticated and mitochondrial DNA analysis shows that it is not the ancestor to our domesticated horses. However, being closely related to the domesticated horse, the behaviour described is that of horses. Modern horses comes in various looks, sizes, temperament, and other qualities, all which have been sprung from selective breeding throughout history. It is, therefore, highly likely that had we domesticated Przewalski's horse instead of the Equus ferus caballus, then we would have essentially the same type of horse as we have now, but with some difference in looks and sizes. Probably the same with zebras, if humans had taken the time to breed away their nasty traits. Although, zebras are more related to asses than horses, so the difference in looks would be greater.

It would not have made any difference.

1: You can, of course tame individuals without domesticating the entire species, but it is more difficult to tame a wild animal and, thus, it will not be a common mount.
2: The Calorie content of raw meat varies depending on where it is from; I used 2000 kcal/kg as average based on this. I also tested various sizes of dogs and noted that it was not a linear relationship, so I used a 35 kg dog which would be equivalent of an average German Shepherd. I used "Working dog (heavy duty)" for activity level to get something that would simulate the maximum food requirement of the first domesticated dogs. The total would be less than 2 kg raw meat for a 35 kg dog that works very hard every day.

I'm assuming here that you're separating 'taming' from 'domestication'.

Taming - Breaking, then jumping on a wild horse and riding it
Domestication - Corralling, feeding, and selective breeding

Since domestication instils and reinforces required behaviour traits, and selective breeding guides physical traits, I'd say that domesticating two similar species of ancient horses would by and large produce the same results as we see today.

Not the answer you're looking for? Browse other questions tagged genetics domestication anatomy behaviour or ask your own question.

2
What's to stop shapeshifting humans from changing their appearance all the time?
2
How could a race of microscopic humanoid organisms benefit from the domestication of a silk producing organism? (Series)
7
Is it plausible that there could be an alien species that has the capacity to mate with and share genetic material with many other alien species?
25
What giant insects would fill the role of our domesticated cattle?
9
How could a bloodline ability manifest in one sex but not the other?
9
Could the Bunker Dwellers become noticeably different from Wastelanders?
3
Would having more than two sexes decrease the number of individuals required to have a sustainable population from a genetic perspective?
6
Visible light from the brain
2
What anatomy would a human-like character need in order to produce in its body and spit/spray from the mouth a variety of liquids?