Ask Question
Asked 3 years ago
Active 3 years ago
Viewed 216 times
1
$\begingroup$
Closed. This question needs to be more focused. It is not currently accepting answers.

It was no secret that the French wanted some beef with the Prussians in 1840, as there was the Rhine Crisis, as France demanded the borders of 1806, where the Rhine was the territorial border between the two states. Before 1840 some politicians already had a very aggressive attitude towards Prussia because of the treaty in 1814 and the Congress in Vienna 1815.

This tension was suppressed by a new minister of foreign politics in 1841, escaping a possible war.

Imagine, this never happened. As both nations have created enormous patriotic tension towards the other state a war started and both armies fought so devastating, that the entire region west from the Rhine suffered mass murder and devastation, like in the 30-years war.

Would it be possible in the aftermath that both states agree on having peace but none want to take responsibility over this region? As building it up again would be too costly, none of the parties want to claim ownership now, as the civilians also have a very negative attitude towards them. So it becomes no mans land, and a faction of paramilitaries take over control, declaring independence, which is fine for for France and Prussia.

Is this a realistic scenario? What should/could I improve?

France has always wanted the Rhine as either part of them or a protectorate of them. France even wanted a French protectorate after World War 1 in our timeline! 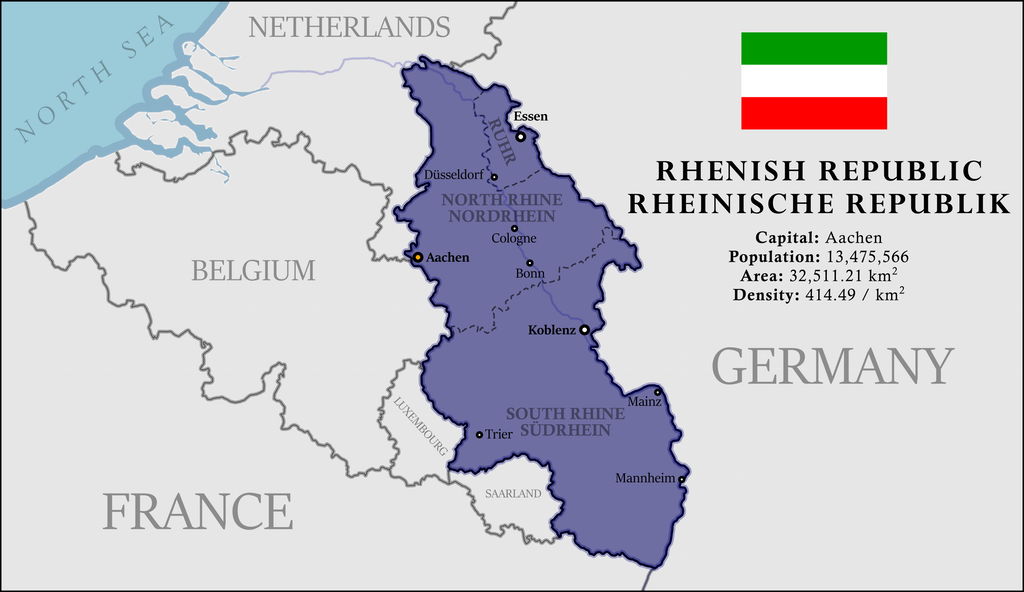 The above depiction is based on what the post WW2 Rhineland would look like by an alternate historian, I could not find the actual propossals

If the Rhine ever became independent I fail to see how it could not be at least heavily allied with France. The best you are going to get is the Rhine being a French Protectorate after your war, then decades later after World War 2, they vote to become independent and the vote passes.

This is actually a rather interesting idea. The strategic and economic worth of the Rhineland is too high for any nation to give up. Thus, the only cause of this would be a war.

Pick a time when Germany, the German Federation, or the North German Federation is weakest, distracted, and France is comparatively stronger. This time is clearly not the Franco-Prussian War or later, as the demographics will have moved against France.

In 1866, the German Federation collapsed as tensions mounted between Austria and the North German States, resulting in the 1866 Austro-Prussian War. Before this, the German Confederation is still a working entity, and therefore, would trigger retaliation from all German states in the former Holy Roman Empire.

In the age of industrialisation, nobody in his right mind would just have given up on the coal mines at Ruhr and Saar.

Not the answer you're looking for? Browse other questions tagged reality-check warfare alternate-history history or ask your own question.

10
Ancient tanks of war
6
“The American British Colonies Support Great Britain in the War Effort!”
6
France wins the 7 Years War
7
What would the effects of a French Seven Years' War victory be on the American Revolution?
7
Is it possible for a country to develop the equivalent of a Second Industrial Revolution while under a war of attrition?