How strong are these dinosaurs?

This question asks about how long a sub can survive, but the content is about how long the crews can survive. The answers given there suggest that the greatest problem is food. Since the food supply brought by the sub is limited, then to survive, the crew would have to secure their own food. With fishes being gigantic, making fishing them not a very good idea, I think they would have to land somewhere and start hunting smaller animals. Problem is, we have carnivorous dinosaurs on the land too. Thus to survive, they'd have to be able to fight large dinosaurs and at times maybe they also need to kill them.

Thus, my question, how strong are some of the dinosaurs in that era? By strong here I mean durable. How much action/force is needed to kill these dinosaurs?

However, if your submarine crew is armed, these animals should for the most part be no trouble, as the herbivores could be either safely ignored or shot and unless Dilophosaurus was a pack hunter it would likely ignore a group of 100+ crew. Allosaurus would also likely retreat at the very least if it was shot a few times.

I'm going to have to put forward the idea that, no, they would not be at all easy to kill, especially for the average submarine crew.

It's not easy to kill a large adult elephant or a polar bear; you need to be firing a rather large cartridge for reliable penetration and damage upon penetration for the reliable killing of these animals. Most people I've read about who hunted such game aimed for the heart rather than the brain - not sure why, but in the case of dinosaurs, this is an easy answer: because their brain is a relatively small target inside a giant box of ridiculously sturdy bone.

Of these, my money is on the rifles and shotguns being able to kill these animals semi-reliably, with the right shooting and the right ammunition in them. The pistols just aren't going to kill anything beyond the Dilophosaurus and Archaeopteryx.

To kill the Brontosaurus - a shot to the neck or perhaps head with the M500 shotgun using a slug should kill the animal in one or two shots.

To kill the Allosaurus - a shot to the heart from the side or front with the M500 firing slugs, or perhaps a few hits from the M4 and/or M16 firing into the same organ, should do the trick. Firing at the head with anything less than massed fire is a recipe for disappointment.

Stegosaurus - Shooting the head is not going to reliably do anything; it has a rather small head and a small brain in it. Instead, you'll have to shoot this one through the heart with the M500 shooting slugs or several M16 ball rounds from the side.

Why kill them, just drive them away, that is a lot easier.

To drive off an animal anything that causes significant pain will work for most, except for the rare berserker animal like wolverines and boar. Humans drive off lions just by chucking rocks, so even small arms fire will drive off most dinosaurs. Pain equals "screw this there are easier thing to eat" for most animals it works even better if they associate the pain with the area and not the animal (basically all projectile weapons) becasue then they aviod the area entirely.

If you have to kill them, then a bullet to the brain or heart kills any of them assuming you can hit it.

A decent pellet gun will penetrate the skull of Archaeopteryx just as it will a chicken. Basically you can just use another animal of the same mass for a rough comparison. The only ones that will give you any trouble are the ceratopsians (which you don't have to worry about) and the largest sauropods.

Sauropods have tiny heads, so comparing them to a giraffe or horse head is fine. Other difficulties is how small and well buried the brain is in the dinosaurs, it's not like mammals where the brain is a significant portion of the head. Heart shots might be possible except your sailors are not going to have any idea where the heart is until they kill and dissect a few.

Theropods From a campfire discussion among bored paleontologists the best way to deal with a T-Rex was automatic fire at the knees followed by a RPG to the head. The knees are a vulnerable point on any biped and lung shots don't work well on things that are breathing with air sacs, body shots are not that effective for a quick kill on theropods. As for the RPG there is a lot of tissue and bone around the brain on the large theropods, an Allosaurus or Dilophosaurus won't be anywhere near as bad although you will still have to put a lot of rounds in the head to hit the brain especially from the front. I feel I should point out Dilophosaurus and Allosaurus did not live at the same time. Of course once you put them on the ground by taking out the knees, they are not much of threat either.

Your biggest problem is that you need to flank them to kill them, from the front hitting the heart or the brain is all but impossible. Best bet is to shoot the knees on the bipeds, then dispatch them at your leisure. Also worth considering, Allosaurs are known pack hunters.

Oh, I should mention there are a lot of crocodiles around at the time, some as big as modern crocs that attack humans, some long legged terrestrial running crocodiles existed as well. Something else worth considering is herbivores are often far more dangerous than carnivores, carnivores tend to be wary of something they have never seen before, while herbivores will attack because you are something they have never seen before. In both cases strange = potentially dangerous.

Stegosaurus is a defensive fighter, so just stay away from it. They can pivot very quickly and the tail is a nasty weapon. What most people do not realize: Stegosaurus is fairly well armored so you are going to have a hard time killing one.

Brachiosaurus is tricky, shooting the head will require good marksmanship, and shear mass will provide a lot of defense. Your best bet is to go for a series of low gut shots and let it bleed out. You can shoot at the legs but moving legs can be hard to hit which means getting closer than is probably safe, keep in bind the leg bones are bigger than a person so you are going to need a rifle to do any rea damage.

Other animals to consider at the time include Amphicoelias one of the largest sauropods to ever exist, Gargoyleosaurus and Mymoorapelta two heavily armored ankylosaurids

More dinosaurs from the morrison formation: 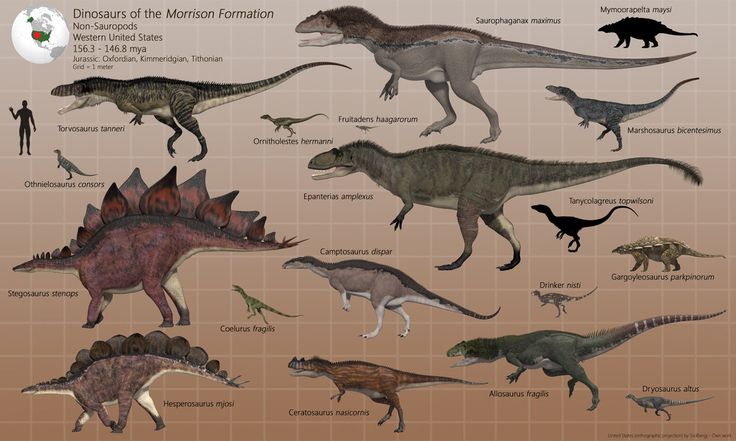 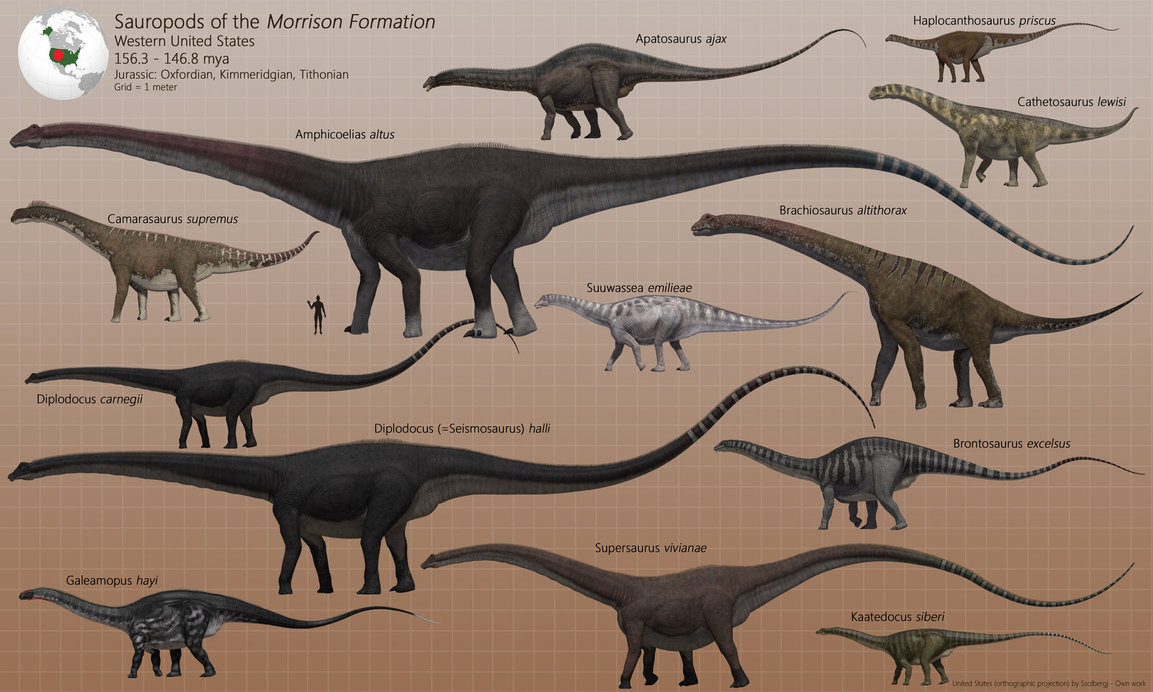 It's all going to depend on the weapons your sailors have on hand (as stated in other answers). You can guess at least a few M4 rifles and some 9mm handguns. Maybe an old 45 depending on the age and crustiness of any Master Chief you may have on board. Unless you are deploying Seal Teams or doing ground operation support, that may well be all you get. I don't even know if the Navy supports Seal teams that way.

For reasons of Plot, let's say your Sub crew does support ground operations that way. You might get your group a Barrett .50 Cal Sniper rifle and someone who knows how to use it. That could be a life saver.

The M4 could be a very useful weapon used properly. You could probably take the Archaeopterex or Dilophosaurus with it. Aiming for the center mass on either of those animals could well be fatal for the animal. However, going after anything larger is foolhardy. A 5.56 round is not large enough to hunt most animals with. Coyotes or small feral hogs, maybe. White tail deer and up, it's not recommended because you are unlikely to get a clean kill. The weight of the slug is too small. A hunter was recently killed because the White Tail Buck he just shot wasn't quite dead yet, underlining the importance of a clean kill. When the animal you just shot is a largish predator with claws and teeth it's even more important. So limit the M4 for defense or only taking the smaller dinosaurs. Likewise any handguns. They might be useful for delivering the coup-de-gras on anything you hunt, but keep them mostly for defense.

With the Allosaurus, Stegosaurus, and Brachiosaurus, Maybe hunt them from a long way off and only with the help of your sniper and the .50 cal. Do not attempt with anything smaller than the big gun. Doing so will result in you wasting a lot of ammo, pissing the animal off, and even if you do wound it fatally, it will take days to die, probably. The .50 cal slug is more than 10 times heavier than a 5.56 and moves at a higher velocity. ke=1/2mv^2* In addition, the sniper has a better chance at shots that aren't possible for an ordinary marksman. Shots to the eye of an Allosaur is now within the realm of the possible when you have a guy who can reach out and touch someone from over 2 miles. A good guess at the point where the neck and base of the skull meet along with the big bullet mean you might could take a brachiosaur. The shape of a stegosaur means you got nothing but guesswork. Nothing that would be vital looks easy to get to.

Any Seals will also know a little something about EOD and things that go boom. That's Explosive Ordinance for those of us who aren't military. They might be able to rig some stuff to go boom and smear it with something the stegosaurus finds tasty. A bit messy, but should be effective.

Another thing your sailors could do is rig snares. That might do more good that all the firearms combined. Take the Dilophosaurs that way, or maybe the Archaeopterex after studying them for a while.

Just don't go shooting at the Allosaurus with the M4. really, just don't.

18
How long could an operational Virginia-class sub survive in the Jurassic sea?
2
How Would Victorian-Era Firearms Fare Against Dinosaurs?

18
Could dinosaurs survive in today's environment?
5
Could humans survive with dinosaurs?
9
What dinosaurs could be domesticated?
11
Reality Check: Megafauna and Dinosaurs
2
Using dinosaurs as a mount
0
Could a tribalistic society domesticate dinosaurs?
18
How would mesoamericans fight dinosaurs?