What are the hippos of the Americas?

In a world where man entered North and South America without causing a mass extinction, all of the paleofauna which became extinct ~10,000 BC in the Americas are still around. There are several families of giant ground sloths, mammoth and mastodons, horses, many llamas, glyptodonts, sabretooths, scimitar cats, short-faced bears and more.

South America is a wet continent and has many freshwater aquatic environments. Two of the biggest river systems in the world, the Orinoco and Parana, run through savanna, along with many smaller rivers.

In Africa, there is a niche occupied by the hippo, a large, aquatic grazer of both water plants and grass (usually by night). It thrives in rivers that run through the savanna. What animal in the Americas, particularly in South America, is most likely to have filled this niche?

You ask what animal in the Americas would fill the niche? Not hippos. Or anything as agressive. More like a Dugong or Manatee-like creature. They are day eaters, but they fit into the aquatic grazer mold.

See this on where they came from, where they went, and how they have changed (early models had legs). They first developed during the Eocene, and have been around ever since in various iterations. Anywhere the water is warm and there's aquatic stuff to munch. They can swim the ocean, and do, but prefer to swim up rivers where they can.

They would have had time to develop by the pleistocene. Here's the wiki on Sirenian evolution.

Apparently at various times there were multiple models of sea cows swimming around, filling various niches. And there were a lot of them during the Pleistocene:

Pleistocene-age manatee bones have been excavated from over 24 sites in Florida, and men hunted them as soon as Indians arrived in the region. link to source

Here's a link to a scientific paper regarding the various kinds around the world. Notice that the ones in Florida that were found, were linked to a period just before what you are looking for.

See this handy link for the current ranges of the species in South America and some of the fossil records of it for the area. It's pretty extensive and likely that they were there, by the time period you are seeking.

An earlier version might have been less docile, and there's plenty of extinct versions to choose from.

Anyway. it's a place to start and they do, at least somewhat, fit what you are looking. Only a hippo is a hippo. As far as I can find, a specifically night feeding, aggressive aquatic feeder is a pretty specific niche--hard to find something exactly the same that isn't a hippo--but some of the early evolution pictures of the sea cow look a bit hippoish, from before they lost the legs. Problematically, by the era you indicate they would have lost the legs again, but maybe you can tinker with that--evolutionarily they've been in and out of the water a bit... 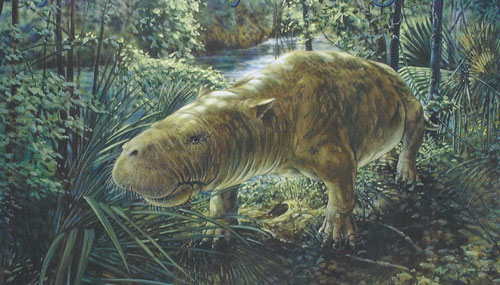 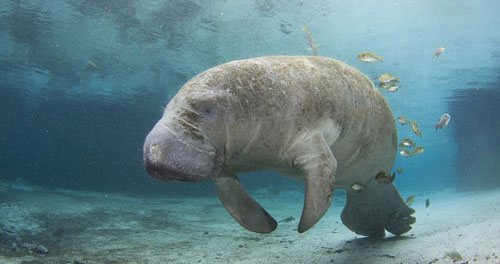 Quite a bit smaller, but still reaching into this niche: the capybara. During this time and in this place, they reached about 100 pounds. Not huge but still interesting.

Capybaras graze in meadows, bed down in the woods, and spend much of their time in water. They require habitat that offers all 3 of these environments. They use water to escape from predators and to cool down during the heat of the day. They are not as helpless as they look for they are fast runners and swimmers, and they have thick hides. Nevertheless, jaguars were likely their most dangerous enemy in North America during the Pleistocene. The extinction of capybaras here probably contributed to the extirpation of jaguars in this region. link to source

Here's a modern photo of these guys, which are about 1/4 the size they would be in the Pleistocene. 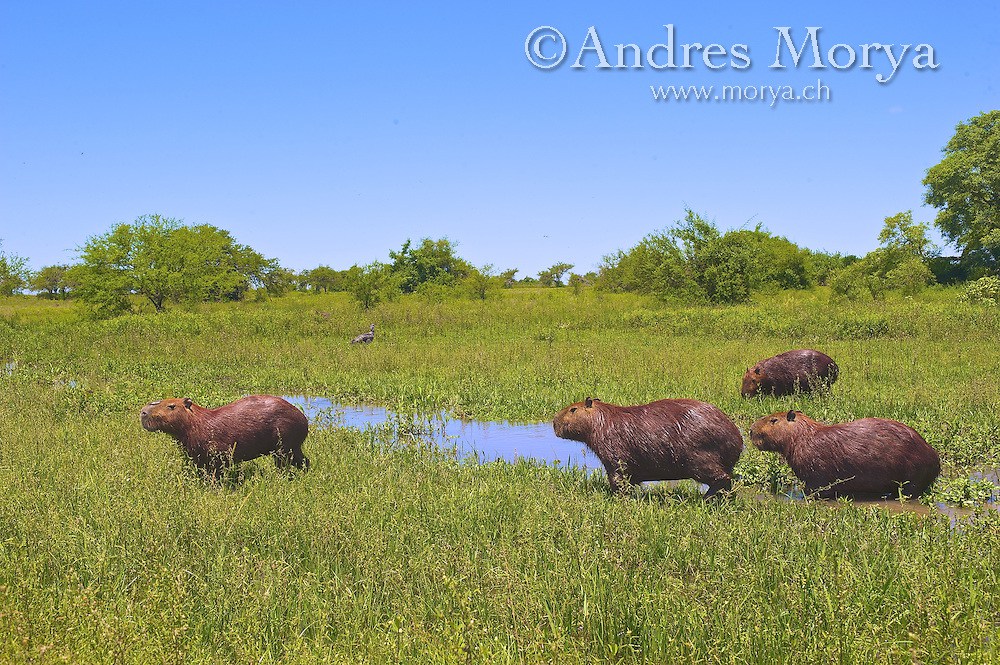 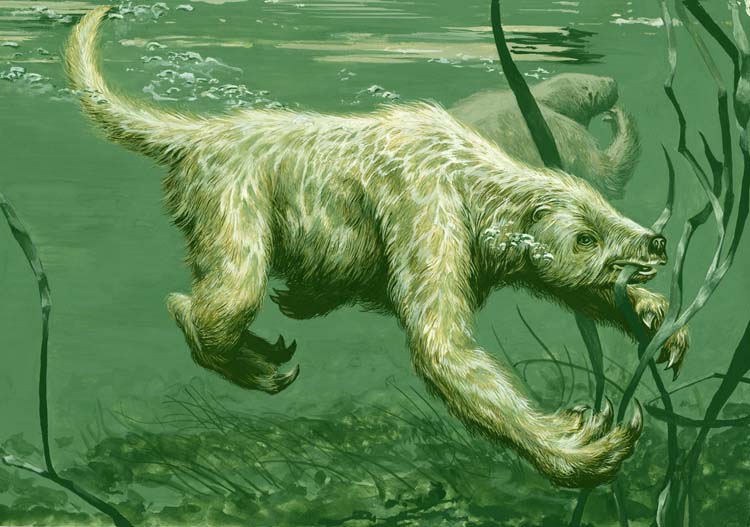 There were at least 4 different families of giant sloths living in the Americas at the end of the Pleistocene. In those families, there were something like 8 different genera, with some larger number of species. In short, there was a lot of sloth variety at that time.

There is one genus of sloth, Thalassocnus, that is suspected of being a semi-aquatic marine (as in salt water) sloth. This genus has such specialized adaptations as heavier bones to provide neutral buoyancy and an extended flattened radius (forearm bone) to act more like a paddle.

Thalassocnus was extinct, but the fact that it appears to be aquatic makes the many varieties of sloths a good bet for a hippo-like grazer. The closest relatives to Thalassocnus alive in the Pleistocene were the Nothrotheriidae, like the Shasta Ground Sloth. however, these various Nothrotheriid sloths all seem to come from rather mountainous and dry areas.

The next most distant branch of the sloth tree are the Megatheriidae. of these there were two living genuses, Megatherium and Eremotherium. These two are distinguished as the largest Pleistocene ground sloths, being up to 6m long and with estimated weights at 3 tons or more.

These two sloths are traditionally seen as more of a giraffe analogue, being able to prop up on two hind legs and a tail to reach as high as giraffes can into trees. But since the two sloths coexisted, and overlapped in range, what if they filled fundamentally different niches? Megatherium is present in places that were projected to have been parkland and semi-arid regions. Its range corresponds closely with the places a giraffe would be comfortable in the Americas. Eremotherium is only present in tropical rainforests and the wet southeast United States.

Conclusion: Eremotherium has the attributes to replace a hippo in tropical american ecosystems.

Not the answer you're looking for? Browse other questions tagged biology alternate-history fauna prehistoric-times or ask your own question.

9
What American animals would have been domesticated had they not gone extinct?

6
Modern Society… Without the Americas?
11
How long would it take for the Americas to reach Renaissance-level technology?
3
Asia vs. the Americas
9
What American animals would have been domesticated had they not gone extinct?
5
Is there any Rubber/Latex source that could have been used by Europeans prior to the discovery of the Americas?
7
Earliest possible colony in the Americas?
8
The Hadean Explosion?
3
What animals in North America are rideable?