What is the most plausible ancestor for tool-using, sentient, bipedal reptilians?

A classical trope of fantasy is lizardfolk, or a similar species by another name (see for instance the Argonians of Elder Scrolls fame). In general, though, we're dealing with:

Modern reptiles are too specialized in their reptilian roles, and their metabolism is too slow to make them serious contenders for the role of a civilized species.

A serviceable solution would be to make those lizard-folk descendants of a basal theropod dinosaur, such as Eoraptor, which would make them distant cousins of birds.

In our world there is only one lineage of dinosaurs still extant: the birds. They are bipedal, some of them are quite intelligent and some of them use tools. The only problem is that birds don't have functional hands, because a long time ago they adapted to flight. Their immediate ancestors had stiff hands with only three fingers, so we must go back to the beginning of the theropods to find a suitable ancestor with flexible hands which could evolve sufficient manual dexterity.

With this hypothesis there would be two lineages of dinosaurs which survived the KT extinction event, with both lineages belonging to the theropod clade; one lineage went trough the tetanurans, the coelurosaurs, the maniraptorans and produced the birds, while the other went in a different direction and produced bipedal, tool-using, tool-making, intelligent, speaking lizard-folk.

It did not happen, but it could have happened. Evolution is driven not only by selection and adaption: luck and chance are equally important. The only big problem is that with Earth dominated by an intelligent species many millions of years before the rise of the higher primates there would be little chance for ape-folk like us to evolve.

Troodon are already bipedal, warm-blooded, partially scaled, have grasping forearms, and there are plenty in the right size range. They were the most intelligent dinosaurs (not including birds), and large brains and large forward facing eyes. You will probably need an excuse for them to not be covered in feathers (or at least protofeathers) but it's not too difficult, modern birds still have scales after all, so so would they. All you need is a evolutionary pressure to revert. As a bonus you can have proto-feathers retained on the head or other places for a hair like effect. Ornithopods only have the most primitive from of feathers and are mostly covered in scales. 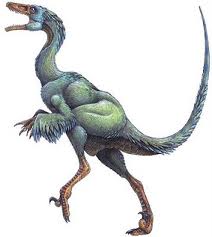 An alternative is any of the small ornithopods like Hypsilophodon they are not theropods and did not have feathers, although they may have had very primitive proto feathers. They are herbivores. You have a bipedal scaly dinosaur with a five-four fingered grasping hand. They have teeth and beaks at the same time as well as cheeks. basically dinosaurs give you a huge range of bipeds to pick from. I'll put an asterisk in front of the things that would not be true of ornithopods.

Now if you want upright bipedalism it's a bit tougher just becasue that has not evolved very often, and there would not be much benefit. But you could swing the body upright as seen in Therizinosaurs.

What might you see in the finished intelligent descendant:

*They will only have three fingers (two and thumb) dinosaurs lost them pretty early. Their wrists fold sideways, how noticeable this is would be up to you. Ornithopods have 4-5 fingers and the wrist works more like ours.

Their hips will be wider than a human of the same size, and the legs should point a little forward. The dinosaur pelvis is very different than a mammalian one. The more upright their posture the more it will look like a therizinosaurus pelvis, although narrower.

They will be digitigrade, with either three or four toes, basically pick the bird foot you want and use that. You could even have the same foot pattern as velociraptors just as troodons have.

How much of a snout they have is up to you, you could even include a beak if you want it certainly evolved often enough. The head should be bigger than a human the shape of the skull puts more bony support around the jaw muscles, although if birds are any indication they may get more intelligence out of a smaller brain.

the neck should be longer than a human and that means I expect the skull should be attached to the neck at the back of the skull not right underneath it at 90 degrees as in humans. Dinosaurs and birds have very rigid torsos no flexing at the stomach for them. That's why the have more flexible necks.

Dinosaurs have worse hearing than humans but better vision, especially color vision, how that affects them I leave up to you.

Just don't look at the attempts at a "humanized troodon" it's awful and wasn't made with evolution or anatomy in mind. you'll get something more like D&D lizardfolk in rough body shape than an argonian. But you can decide how upright you want them to be, just keep in mind only mammals have buttocks.

*Oh one more thing, your animals will not chew, not really, they would have a crop and they would swallow stones (gastroliths) which will do the chewing for them. I could even see a market for hand cut angular stones for this purpose, you might even see wealthy individuals buying hard semi-precious gems like jade or corundum for this. I imagine regurgitating worn out (round and smooth) stones would like seen like any bodily function. Ornithopods on the other hand do chew and even have cheeks to facilitate it and they would not have the stones.

As AlexP pointed out any basal theropod or coelurosaur will work, if you go early enough you can get more than three fingers as well, any you won't have to worry about proto-feathers.

It's more advanced than other reptiles, specifically including a four-chambered heart.

So they evolved into many diverse forms and also stuck around unchanged: Most reptiles that were around back then are extinct and are largely unknown by the general population. If you look at when mammals split off, for example, it’s hard to point to a specific ancestor; rather you have to say some kind of Amniote and looks like a generic lizard.

It’s easy to imagine a lineage of crocs that continued to advance but retained more of what we would consider to be a reptilian appearance including lizard-like skin. This is what people have imagined as a “dino-man” before realizing that therapods already had feathers.

So this is a unique choice in being a recognizable species, and also is exactly what others have imagined in possible evolution from dinosaurs.

Given that lizardfolk are often presented as using stone tools, it wouldn't be a stretch to say they're slow evolvers.

Lizardfolk are often in magical worlds where evolution takes a back stage to magical bioengineering.

Also, if you have a world where lizardfolk are naturally possible, it's likely that there were different species at some point (for example, gecko-based). (At one time there were two species that modern humans could have evolved from.)

Common Basilisk lizard. The ones you've probably seen in videos running on water (on their hind legs). imho, you need to free up their front paws, which will domino into larger brain size. Our path was probably use of forepaws in the trees followed by going down into savanna and finding them useful to hold weapons. If you don't get them off their forepaws, you're unlikely to get tool use, imho and so unlikely to get intelligence.

Had the K-T mass extinction been slightly less severe (eg the asteroid hit at a shallow angle or at a lower velocity, somewhere less dangerous ie with a lower sulphate level) many species might have died out including the larger species but the smaller scavengers could hide underground for a few decades taking advantage of geothermal energy and further develop their intelligence then re-emerge later once the dust had cleared.

The evolutionary pressures later on might have been enough for them to evolve from mere opportunistic scavengers such as ornithopods into hunter-gatherers, lose their feathers in favor of heat and UV-reflective and visible mimic scales similar to a snake or lizard with the side effect that they could also somewhat hide in the background as modern chameleons already do by shifting scale angles or some other variant of camouflage such as chromatophores similar to deep sea squid. This would have the side effect of making them much harder for predators to spot and may have even given them a significant advantage over mammals.

Interestingly they may still lay eggs but take care of the vulnerable young thus freeing up capacity for brain development which was the main bottleneck in A.afarensis and other hominids due to pelvis size versus head size.

If there were geographical pressures such as an isolated archipelago or some other (cough Zealandia /cough) area then they might have stayed in one small area and eventually over time developed technology based on organic computers which led them to develop highly advanced space travel from primitive liquid fueled rockets to metallic hydrogen synthesized from abundant natural diamonds and Orion drives based on natural uranium a la Oklo without burning through an entire planet worth of resources when finding that another large impactor was en route beyond their abilities to deflect. This would also leave very little for future geologists to find, the process of mass migration ahead of the impact could involve something like an Orion drive that would totally wipe out the now-deserted island and produce a crater.

Someone should write a science fiction novel using the above, it would probably make good reading.

Not the answer you're looking for? Browse other questions tagged biology creature-design evolution fantasy-races reptiles or ask your own question.

2
could my Lizardfolk exist?

1
Low bio-diversity, high oxygen : implications for development of tool-using life
10
What is the plausibility of a sentient starfish-like creature?
23
What is plausible biology of ocean-dwelling, tool-using, intelligent creatures?
1
What would be a plausible evolutionary path for a species of marine primate?
6
Plausible materials/chemicals for a sentient blob creature to be made out of
2
Wings going from locomotive purposes in juveniles to sexual purposes in adults, plausible?
9
What would be a suitable amusement park for four-legged sentient beings?