You eat this plant, it eats you right back. Can it work?

Based on an answer of mine from a few months ago, I've been inspired to adapt the concept to my own Life Ball. Fair warning- this question and some of its links are not for the squeamish. May contain graphic images and descriptions not suitable for all readers.

All is not rosy on this world, and there are plenty of thugs and assassins around just looking for creative ways to do-in an adversary. Fortunately, the local flora have provided a wonderful opportunity for a particularly gruesome and gory murder. It's risky - you have to initially get fairly close to the target, but you also have ample time to escape before the crime is discovered.

A certain member of the pinguicula genus- let's call it a vexwort- has become especially potent and hardy. It still prefers to spend its day trapping and absorbing insects, arachnids, and small reptiles and rodents. However, its mucilage is strong enough that any animal that brushes against one is likely to suffer a nasty rash, similar to that caused by giant hogweed exposure. It also has developed totipotency, allowing it re-grow an entire plant from a leaf segment as small as 2cm.

If one swallows such a segment of vexwort within a handful of hours of its cutting, it will re-grow from the inside out. Its own digestive secretions allow it to survive the acids of the stomach, and pass through. It then finds a convenient spot along the intestine and implants. It sends out new shoots through the soft tissues and begins soaking up all the victim's internal nutrients. Eventually, vexwort leaves burst out through the skin, by which time the victim has expired from multiple organ failure.

The situation might be comparable to bamboo toture or to what happened to this unfortunate guy who inhaled a pea.

A would-be assassin needs to very carefully, with gloved hands, harvest a vexwort and cultivate it in a secret location until just before it is needed. He then needs to sneak one or more small cutting into the victim's soup or salad, just before it is eaten.

This is a "reality-check" question. Is this organism plausible and viable? What details of its life and development might I have overlooked, and need to think about more? One particular concern is over the cutting surviving being cooked and/or chewed.

Maintaining viability of leaf cuttings after consumption would be difficult (impossible). While it is possible for people to swallow some leaves in a salad with little chewing, there is a very high likelihood of it being discovered - even if not observed while eating, the taste or just the effect of the leaves of such a plant contacting the inside of the mouth are unlikely to go unnoticed. I could perhaps get around this with some waxy coating to protect it from being tasted and to aid in surviving digestion (serious problem there), but one bite and that is ruined. Are you good with the plot being detected/ruined the majority of attempts?

You're probably better off trying a small quick-sprouting seed than a leaf segment. The seed coat protects it from chewing and exposure to stomach acid (which could actually help the process by weakening the coat and triggering the germination process), so a few hours after being eaten it has broken out of the seed and adhered to the wall of the intestine. Perhaps administer it with a substance which promotes constipation to give the seed more time to adhere.

Once embedded in the lining of the intestine, poking through to expand into the abdominal cavity, it could establish itself sufficiently that treatment would be difficult. Depending upon the medical technology of your setting, even once diagnosed (which could take considerable time after just treating a prolonged bout of constipation) there might be no cure save massive exploratory surgery searching for every little piece through already severely damaged tissues (unlikely to survive the surgery anyway). You just need a plausible plant capable of this, but unfortunately I am skeptical that you could realistically expect a leafy plant to survive being eaten and then thrive inside an animal for sufficient time to kill the host.

You are probably much better off going for a fungal infection (if you want plant-like eruptions out of the corpse), though parasites are likely a better approach anyway. There are numerous deadly parasites which infect hosts through ingestion of eggs far too small to notice (or spores in the case of fungi) - they won't survive a thorough cooking but contaminating the dish afterward, or contaminating a dish which is only lightly cooked, should be easy enough. A rare fungus or parasite, which would often be misdiagnosed (why would they suspect something not encountered naturally), could get plenty of time to establish itself. Depending on how fast you wanted it, a few weeks before a correct diagnosis or death should be plenty of time to protect the identity of the killer.

If you're not insistent on it being a leafy plant that can grow within a person, there is a fungus that exists known as a 'zombie fungus'. https://en.wikipedia.org/wiki/Ophiocordyceps_unilateralis. It infects ants, causing them to lose control of their bodies. They are driven by instinct to travel to the perfect height on a branch or tree where they latch on and ultimately perish. There, the fungus sprouts out of the ant to spread its spores to other ants of the same species.

Generally, the fungus is specialized for a species of ant, but I wouldn't see any problem adapting this sort of fungus to humans with similar effects. The fungus uses its own enzymes to eat through the exoskeleton. It's so effective, that it has been known to annihilate entire ant colonies. 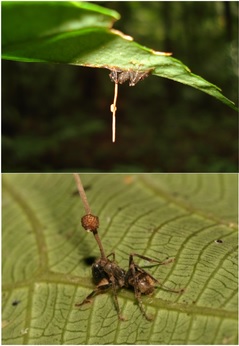 Note that the little stick thing growing out of the head and the bulb is the fungus.

Edit: Based on some further research into fungus and acids, even weak organic acids tend to inhibit or stop entirely metabolic processes in plants and fungi(which is probably why we don't see plants often growing inside of peoples' stomachs). That said, it should be fairly easy to just sprinkle their food with some fungal spores, expecting it to come into contact with their skin (lips, fingers, etc.) while eating. The fungus may also have grown in a highly acidic environment (stomach acid PH is between 1 and 3, which is quite strong) giving it resistance to these acids. I could see it possibly being engineered (bioweapon) to have a cell wall that resists stomach acids.

Not the answer you're looking for? Browse other questions tagged reality-check creature-design flora poisons or ask your own question.

70
How often must carnivorous grassland eat?
16
Where can you find berries that eat people from the inside out?
2
How plausible is a photosynthetic parasite that targets animal hosts?

9
How would plant control powers/magic work?
26
Can every animal eat most other animals?
14
Can a plant evolve to give off CO2?
1
Can this mind control work?
25
Would this biological cooling system work?
4
How could this dragon-killing poison work?
16
Where can you find berries that eat people from the inside out?
1
How could my lava plant work?