I'm writing a plot to video game (i hope i'll learn unity and make it one day). It will be 3D Adventure from First Person Perspective. Player Character is a modern day professional hunter. He is moving through the winter forest. It is dusk, the weather is very bad - cold and blizzard. He sees a camp-fire. He approaches it and sees two persons dressed in dark cloaks sitting near to it. Let's call them Aliens. They looks like this (but in dark cape) - 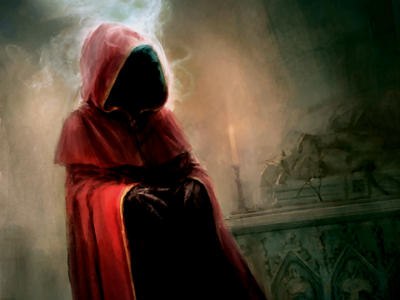 Player's Character is frightened, and aims his 2 barrelled hunting rifle on them. One of Aliens does something, and Players Character's rifle is transferred to one of Aliens.

Spoiler less background on Aliens - they are humanoids from more advanced civilization, they have scouting mission on Earth. They are in general humans (even without cape they are quite hard to distinguish from human), they possess powers like telekinesis, mesmerism, telepathy. They are very strong and fast.

Question is: how we can disarm rifle wielding human in harmless, but very bizarre, alien and unusual way?

Does the human have to lose the rifle? Or would totally disabling it be acceptable?

The alien gestures at the gun; it suddenly becomes warm to the touch, and the human finds he can't pull the trigger. Further investigation shows that all metal parts have fused together where they touched, leaving the gun a useless piece of intricately carved metal.

(This is actually a thing that really happens to metals in a vacuum - if two metal surfaces are pressed together in vacuum, they can weld to one another and become a single unit)

The gun simply vanishes from the player's hands and appears near the camp fire.

The alien suddenly appears to be in several places at once, or a monster of some description appears and becomes a much higher priority. Whichever alien the player shoots at turns out to have been an illusion, and the alien has closed the distance and manually taken the rifle.

Of course, this can be combined with other methods, but simply having the alien request the human lower their weapon would give the player some sense of agency, rather than just having the weapon vanish.

Not the answer you're looking for? Browse other questions tagged warfare aliens behaviour humanoid or ask your own question.

3
Unusual reproductive method for a particular species
2
Group-minded alien species create alien human hybrids- why?
50
Tactics to prepare for an alien invasion when nobody will believe you
1
“Alien” superintelligence learning human languages