How to fracture a continent

You could consider a large series of hot spots, such as the Emperor-Hawaiian Seamount.

These are migrating volcanic areas that eventually surpass sea-level. If your planet is submerged and tectonic, you may eventually produce a long series of islands. The cause is produced by the movement of the ocean crust over the hotspot, resulting in an upwelling of hot rock from the Earth's mantle.

This would take very careful finesse of tectonic activity, but essentially may be your answer. Use hot spots to create your islands.

In essence, consider growing your islands, instead of fracturing your continents.

EDIT: Additional info, here is a map of postulated hot-spot centers on Earth (dunno the source - it's on my computer from ages ago); one can imagine your submerged planet having islands around these centers, which migrate over eons, creating even more islands. 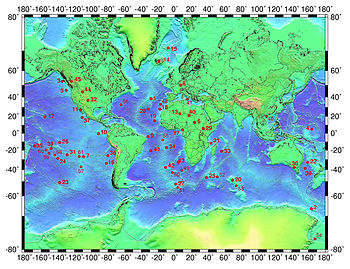 However, if you are willing to relax the constraint of the size of the subcontinents, the Earth itself may serve: remember that we are living in an ice age and the sea level is unusually low (geologically speaking); we are also living in a time when continental plates are quite bunched together. The Earth was not always like this: see for example a map of the world in the Cretaceous (source). Your world may be just like Earth in more normal times, when the continental plates are more widely spaced, the sea is much higher than in our frigid times, the poles experience a pleasant temperate climate and there are many large shallow seas subdividing the continents.

Convection currents in Earth's mantle create the movements of the continents. You could just have a particularly turbulent mantle that would have many opposing currents. On Earth we have a thick mantle layer, that means big currents. Maybe on your planet the core makes up most of the mass of the planet, leaving the less dense silicates and other rock material to convect in smaller pockets. Imagine a thick liquid that you're boiling in a pot. In a deep pot with lots of liquid, the middle has this huge flow that always seems to be coming up. But if it's a thin layer, you would have lots of little flows everywhere. In the thin layer, the currents don't get a chance to combine and reinforce each other on their trip up to the surface.

16
Asteroid impact. How big does it have to be to globally affect plate tectonics?
20
Would an island-covered planet be possible?
16
How quickly can I form a mountain chain?
2
Plausibility of a planet with independent city-states instead of countries
8
What sort of habitats could exist Pre-Zanclean Flood which formed the Mediterranean Sea?
1
How plausible are the terrain and land-forms on my fantasy map?
10
How might a mountain bowl form?
6
How could a volcanic island last for 100 million years?
5
Landmasses on a planet with enormous tides
4
Consequences of a Super-Light Super-Earth?