How long will it take for the amount of living to exceed the dead population?

The current world population is around 7 billion living people and 107 billion dead people. Since the population is increasing steadily and faster than ever, I was wondering if we could ever reach the turning point.

Given the 'facts' from this source are fully correct, I am left with two questions:

(This first question is purely asking about the math, excluding the question of the availability of food, housing and other resources).

(This one does take the lack of resources into account).

Like other answers said, it is not practically possible at this point for Earth to sustain a population greater than number of people already dead. Unless you assume that every woman on the Earth for some strange reason decide to give birth each one:

So in the case that every woman now decide to give birth to 31 children (well in reality should be 40: we have to take into account people that would die in the meanwhile and keep a good error margin), and assuming (each pregnancy last 9 months) that in the middle of the process we will not end the available food (at some points we will have 60 billions people to feed and the Whole process would last 40 years), then yes it is theoretically possible.

However there's no way we could do that in general:

Assume that population keeps constantly doubling: in that case the sum of dead people and living people would be almost the same, but a double growth rate is not sustainable, at some point it will slow.

To keep living population greater than dead population then you need a growth rate that is more than constant doubling ( x3, but also x2.1 is fine... or even x2.00001 and so on), and that is even less sustainable that a doubling growth rate.

While in theory it is possible to exceed that limit for now (assuming enough resources), we will quickly reach a limit that will not allow us to exceed that again.

Then we will not be able to exceed that limit again. (well in theory we could do that in a hundred of years, assuming we can keep a exponential grow of population for so long).

The primary reason is that population growth has already peaked. From the US Census Bureau: 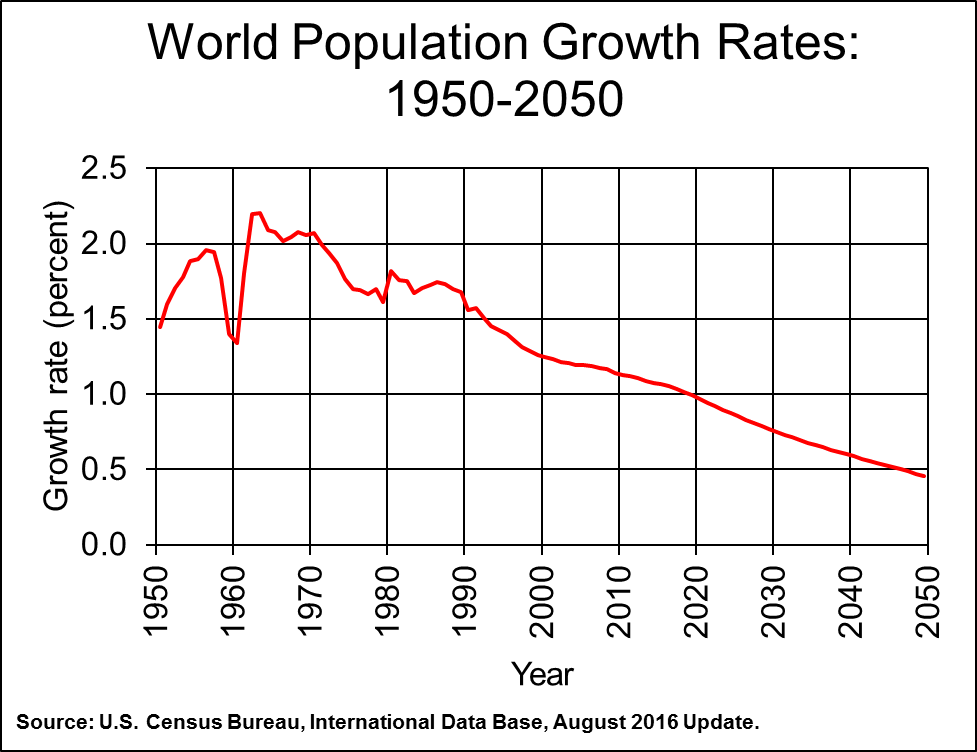 Estimated growth is going to drop further. The UN currently estimates that population growth will top out at around 11 billion people in 2100.

Given that world population is not likely to even get close to 100 billion +, it is very unlikely that human living population will exceed the dead.

Great question. This is one of the questions that my friends and I have asked at various points in our lives. (also: how long would it take for N monkey, typing randomly, to create Macbeth spontaneously?)

The population data SEEMS wrong. Why? My suspicious arise because there is no mention of estimated lifespans or the rate of death in ancient populations. Let's try to fill in some of these and see where that gets us:

Plug these numbers into a spreadsheet and see that a starting population of 5M in 8000 BC would grow to 5e192 by the year 1 AD. !!! SOMETHINGS WRONG HERE !!!

I'm thinking that the number of births is too high: one would have to look at the model demographics to see if this is realistic: Assume an evenly-distributed cohort of 1000 persons, with ages ranging from 0 to 40. this places 25 people per age. Assume that the fertile years are from 15-40, etc. and you can really look at a more realistic model of populations. (for example, half of those born would not be able to give birth...)

To sustain a lot of births and keep a slowly growing population, you need to have a lot of deaths. We need numbers like infant death rates and the risk of death during childbirth. If they are huge (79.48 / 1000), this can get you to 300 million by 1 AD on a smooth glide path. Doing so would require 47 billion people to be born in this span--a truly epic slaughter. (this might be the way that the referenced numbers were achieved)

It is possible, though, to look at the rate of birth and death in primitive populations in the Amazon, New Guinea, or Kalahari tribesmen. I suspect that this would suggest birth rates at 50 per 1000 (I'm not asserting this--i'm probably wrong); It's probably not a good idea to gauge ancient birth rates from any data collected anywhere after 1800. Increasing urbanization, medical, food improvements, and access to petroleum-based energy added an artificial stimulus to growth rates that probably did not exist in earlier eras.

With these numbers, it would only require 28 billion people to be born in this time.

My suggestions are: (1) define a model that accounts for realistic birth behavior and more detailed methods of death. See what models suggest from this. (2) try to find some proxy for historical birth rates form archaeology or comparative anthropology.

Easy Answer: Zombies! Or some other mass resurrection. The math doesn't support it any other way, as has been pointed out in all of these other fine answers.

Another possibility would be cloning on an enormous scale. The only problem with massive cloning is that it serves no purpose in the stated premise. If we can't leave the planet, Mother Earth will slap down the population growth one way or another. Either her or our own hubris will prevent growth of the living to surpass the dead. Remember that the planet is a closed system.

Here is one way the living and the dead could reach population parity. If we had the means to store consciousness in a computer, and then archive everyone alive today. Then, as people die, the become activated in this new digital Elysium. Grant them rights and agency on par with those still in the "meat space". You would be then, in essence, granting immortality that maybe could work within the closed system of Earth without the great mother earth slap down.

Conclusion - we can never get equal or even get near to the dead population.

Exception is if tomorrow women start giving birth to babies like pop corn. Lets say we have 7 billion people, and lets divide population this way (for example), 25% children, 25% men, 25% old folks, and 25% women. 25% from 7 billion is 1,750,000,000. To get the number of 107 billion living people, each woman need to breed 57.143 children during this life. Since more people would die till all of this women in labor meet their ends, number is slightly increasing to around 62 babies per woman.

Exception no. 2 is immortality. No need to write much about that.

Conclusion no. 2 - planet Earth is perfect in doing one thing, recycling. Every living being is recycled after death, and who knows how many other forms of life that brings. I'd say that number of living and dead is always the same, the only thing that is changing is people. (judging by the fact that we are all recycled)

Until about 6,000 years ago, the population of the living people in the world was 4, with none dead. Then Cain murdered Able, prior to the birth of Adam and Eve's third child Seth around 3900BC.

Given the longer life span of people in the early days of the world, the living probably out numbered the dead until about 2350BC when the great flood killed most of humanity.

Related sister site question Who was the second decedent of Adam to die?

It probably already has. According to several books that I've read on lineage all modern humans can be traced back to one group of 500-3000 people who lived about 100,000 yrs. ago, meaning that apparently we've almost gone extinct before for whatever reason. Adding in things like the Black Death epidemic and the fact that it took until 1900 or so for the population of living humans to reach 1 billion, the total number of humans who've ever lived isn't nearly as great as you'd think.

Not the answer you're looking for? Browse other questions tagged science-based earth population death .

9
What is a reasonable amount of population growth for 900 years?
18
How long will it take human population to exceed one trillion?
7
Floating City for 1 billion people
3
Saving the planet by reducing the population
42
How long would it take until we realise that people stopped dying from natural causes?
15
Population Size of a Colony With a Large Gender Disparity
9
How long will it take for the off-World population to exceed Earth's population?
6
How can we survive if the ocean started draining?
6
Which areas of USA would have the most successful centers of growth after nuclear holocaust?