Would this positron reactor work?

A few months ago I was looking for a way to get to Gliese 581 within 100 years. So I've been reading a lot from Wikipedia and other sites about different propulsion devices. Then I found an wonderful article from NASA about the antimatter propulsion and more precisely the positron reactor.

So, my question is, assuming I could produce and store enough positrons, could I use a reactor like this to travel to a stellar system to another? I wrote down it would make my spaceship go to a speed of "very" approximately 63,000,000 km/s using more or less 100 kg of antimatter, is it true?

Expanding on kingledion's answer, the interaction between positrons and electrons produces gamma radiation at a very specific energy as well: 512 kEV. Gamma radiation at that sort of energy will penetrate materials fairly easily, and most reaction materials like hydrogen or water will be virtually transparent to the inferno of gamma radiation, meaning most of the energy will simply pass through the reactor and end up irradiating the structural members of the vessel. The stuff you want to heat up isn't going to become as hot as you want (a superheated plasma for maximum ISP), while many of the things you would prefer to remain cool are at blazing temperatures.

You will actually have more success using anti protons, either interacting with normal matter protons in a beamed core engine, or beamed into the reaction mass flow to heat a larger quantity of water or hydrogen.

Antiprotons are made up of antiquarks, and the reaction of antiprotons creates a stew of charged particles. Most of these particles can be directed with magnetic or electrostatic fields so the energy they have is directed away from your ship, and hopefully out with the blazing plasma of your exhaust stream. Far less energy is going to be deposited on your ship's structural members, and the overall efficiency is going to be much greater (i.e you 100kg of antiprotons will provide far more usable energy and thrust than the same 100kg of positrons). 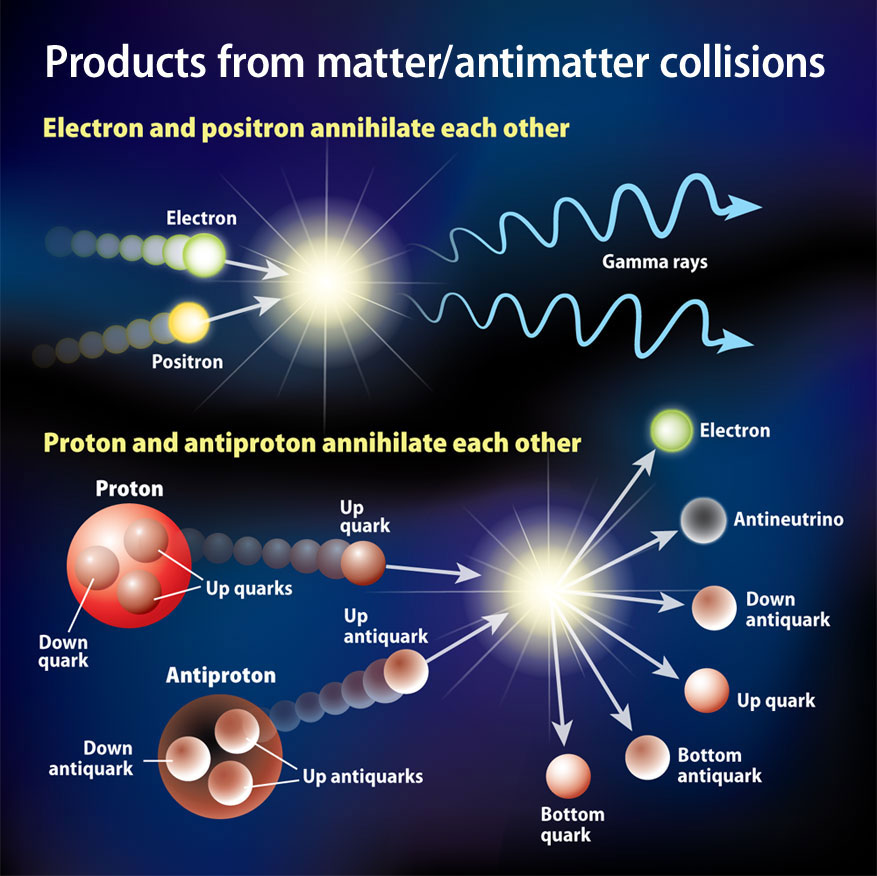 The difference between positron and anti protons 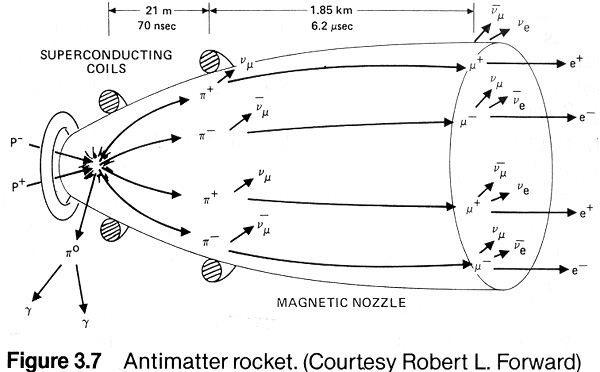 Simplified diagram of an antiproton rocket

So while an positron rocket seems to be going about things the hard way, using antiprotons to energize the rocket, either in a beam core engine or as a means of heating reactant seems to be the better way to go.

There are more technical hurdles than you are mentioning

I would group the technical hurdles into two general groups:

Then the third hurdle is covered in your assumption, how to produce and store sufficient positrons; which is actually the toughest challenge of all. The linked article is not very good on details, and doesn't really address any of the three technical hurdles. The article mentions ablating something to provide the thrust, but doesn't really say what or how it would be directed.

I would say, based on the information in that article, that this design is not feasible until more engineering is done.

For the production and storage of positrons, the SLAC Linear Collider at CERN used a crystal tungsten target and a low energy, 5 GeV electron beam as its positron source.

And this paper describes using a tungsten heat shield for collecting the gamma radiation and using compton scattering to transfer the momentum from the reaction to the craft. It implies that micro-propulsion is possible however the engine is limited by the melting point of tungsten, and suggests a liquid tungsten heat shield might alleviate this limitation.

Why store the positrons at all if you could just produce them in situ and use them up immediately? And tungsten also blocks gamma radiation. So just design your engine nozzle so that it redirects the radiation away from the craft. The more you block in one direction the faster you go, so that's kind of the goal anyway.

Not the answer you're looking for? Browse other questions tagged science-based reality-check technology physics space-travel or ask your own question.

2
Would this megastructure work?
4
How would gravity work in this alternate universe?
3
Manipulating decaying positron-emitting isotopes for positron “mining”
1
Can this mind control work?
25
Would this biological cooling system work?
18
How would an antimatter reactor actually work?
9
Would this “self driving” car work?
6
Is this a plausible interstellar propulsion system?
4
Would this drone structure work?
6
Deuterium Fusion Reactor + Direct Energy Conversion - what sort of stuff would this sort of reactor need?