How could the sky be orange in a breathable atmosphere?

I've discovered some ways of coloring the atmosphere through personal research:

But I might have misunderstood something. So I ask the question here: On a planet other than Earth, how could the sky be orange but the air still be breathable? The more precise the answer the better.

Rule out some things

If the atmosphere is more dense, then it will refract more. However, light refraction is highly wavelength dependent, so if it refracts more light, the sky will be more blue. The equation can be seen here. Different compounds have different scattering cross-sections, so they will scatter different amounts, but all of them will have the same wavelength dependent curve.

So basically, we are limited to a tinted sky to get the orange color you want.

If your sky was tinted with something orange, then it would be orange. However, there would still be a blue-ish tint to the atmosphere due to reflection from the much more common nitrogen and oxygen. Your best bet is to have planetary cloud cover that is tinted orange; then there is always an orange backdrop at a couple of km altitude.

The list of things that could be in the clouds and are orange is not long. For gasses there are basically none, but Nitrogen Dioxide and Bromine might be close. Nitrogen Dioxide clouds are plausible in some sort of biologically dominated system. Bromine sounds pretty dangerous. While it is very reactive and won't normally be found as a bromine gas, sunlight converts organo-bromide compounds to free bromine at the top of the atmosphere, so that gives us a plausible reason for bromine haze. Unfortunately, free bromine destroys the ozone layer, so that is a bummer.

As far as aqueous compounds suspended in water droplets as a method for coloring clouds, we have Dichromate (Cr$_2$O$_7^{2-}$) and Cobalt ammine {Co(NH$_3$)$_6^{3+}$}. I don't know much about either, but neither one sounds very healthy. Depending on your goals for this planet, you could either have the geological and life cycles on this planet be adapted to having high levels of chromium or cobalt around, or just make your human explorers wear masks.

You are correct, the sky can be orange using any of those methods.

Airborne 'xeno-algae' that use a close analog of carotene absorb the visible light other than orange.

Here's a way to make the sky look orange, as seen from the surface:
There are several phyla of xeno-algae that use a close chemical analog to https://en.wikipedia.org/wiki/Carotene as their primary photosynthetic absorber.

These xeno-algae are so successful and well adapted that only the light they cannot absorb (orange) reaches the surface. A side effect is that the stars aren't visible -- even the sun is diffused into a mere 'bright patch' in the sky. Surface-based plants use something like chlorophyll, but the surface energy economy is sparse, compared to earth. Fallen xeno-algae* is a significant base nutrient in the ecology.

Cloud of Gas or Particles Around the Sun

I am not well versed in physics or optics, but I think it might be possible for the Earth's atmosphere to remain the same in terms of elements and still be orange if a cloud of gas or particles were to come between the sun and Earth, thereby coloring the sun's light a different color so that when it enters Earth's armosphere, the primar color seen is orange.

Perhaps if the cloud of elements only had an emission spectrum of orange, i.e. around 600 nanometers (nm), then there would be no other colors coming into earth's atmosphere.

So, if the cloud blocks all the other wavelengths/colors of the visible spectrum of sunlight, then orange would be (I believe) the only color visible.

This scenario would allow you to have an orange atmosphere on modern day earth without changing Earth's atmosphere or the sun, but it would certainly wreak havoc on life on Earth by eleminating all the rest of the wavelengths of visible light.

You can increase the thickness of the atmosphere, so that only the red part of the Sun spectrum is transmitted (like it happens at sunrise/sunset).

Replace the nitrogen in the atmosphere with neon.

Neon is a noble gas, very similar to nitrogen, which is non-reactive in most situations. It also glows red when ionised.

This means that your planet can have a breathable atmosphere, since neon can be inhaled safely, and a mixture of yellow sunlight with a gently glowing red atmosphere should give you the orange sky you're after.

You don't need anything fancy for an orange sky - in fact, many Australians experienced it profoundly in early 2020: 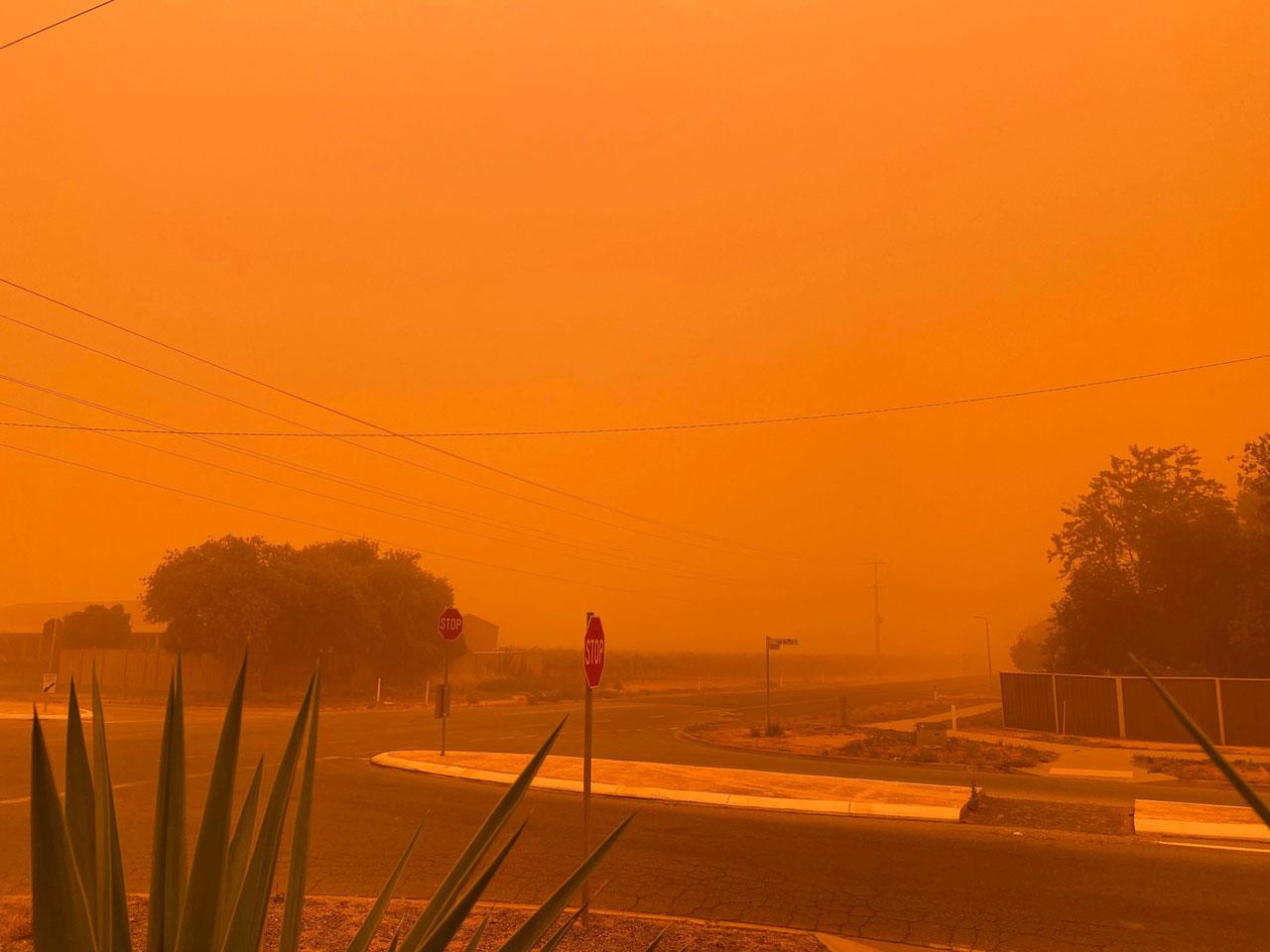 Particulates from bushfires - in particular, black carbon and volatile organic compounds - absorb blue light strongly, re-emitting at lower wavelengths. This produces an orange sky, with the tint variable by minor changes to the spectrum of the star.

The problem is maintaining an orange sky year round - it seems unlikely that you could grow forests at a sufficiently high rate to produce global smoke. Instead, if you make your planet much younger than Earth, volcanic ash could do the job.

10
Sky color of an alien world
11
What earth conditions would make a permanent bronze-colored sky?
7
Possible sky colors compatible with life on earth

9
What is the color of the sky in a hollow earth?
4
What would the air on a planet look like if it had a mostly methane atmosphere?
33
Terrestrial Exoplanet Skies – I've Built a Visual Sky Chart. Is it Correct?
6
Would crystal-asteroids filled with a gas like iodine be plausible to refract light into making a coloured sky?
7
Possible sky colors compatible with life on earth
2
How much neon would need to be in an Earth-like atmosphere to tint it considerably orange/red?
5
Densest breathable atmosphere composition for a human being without breathing equipment
4
What would the atmosphere of the Archaean Earth look like? (Before massive oxygenation)
2
Appearance of an Ammonia World's Atmosphere