Could a nuclear war cause the majority of Earth to be uninhabitable for hundreds or thousands of years?

I understand that nuclear bombs don't have lasting radiation effects on the area that they're dropped. Examples of this are Nagasaki and Hiroshima, where less than a century after an atomic bomb was dropped, both cities are thriving.

However, nuclear reactor meltdowns are a different story. Apparently, a 30km radius around Chernobyl will not be safe for humans for another 20,000 years. I imagine that a worldwide nuclear war would affect many of these reactors and that the radiation from these would cause a pretty terrible environment for many years to come. There are currently 433 nuclear reactors in the world: 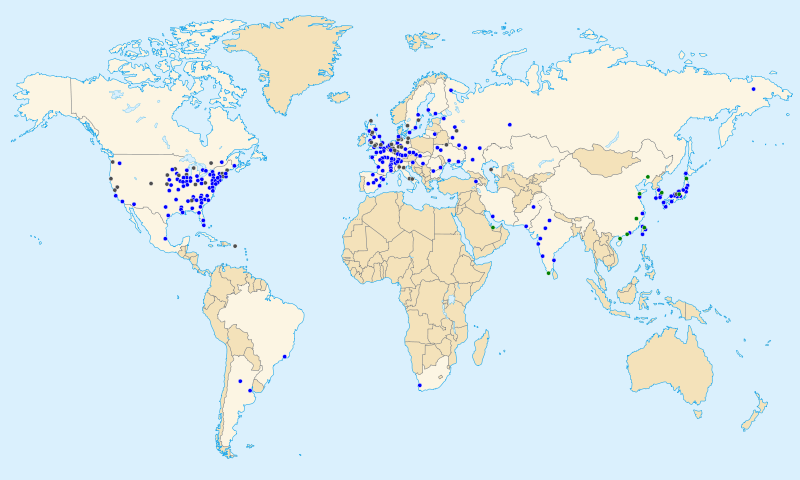 It certainly is possible for a large enough nuclear war/event to cause the Earth to enter a Nuclear Winter. This would most certainly affect every corner of the globe, and lead to massive die-offs.

Understand that this has less to do with whether the nuclear reactors are all hit/destroyed, than with the actual amount of destruction that a nuclear war would inflict even without causing some reactors to fail catastrophically. The destruction which those failing reactors would cause would be rather localized. However, they would release a much higher amount of radioactive waste into the atmosphere than a relatively "clean" nuclear weapon.

The weather system would then probably move those radiation clouds around quite unpredictably, running a very good chance of wiping out most land-dwelling species, Homo Sapiens among them.

And so, a bunch of nukes going off would be quite sufficient to kill the vast majority of us as it is. 400+ of them would most likely wipe surface dwelling life off the planet. And exploding nuclear reactors would probably release exponentially more radioactive waste into the atmosphere, making it that much more likely for all of us to die gruesome deaths.

Would any place be safe? In the event of a nuclear winter, the entire globe would be affected. That would be dangerous in and of itself, additionally, that much radiation would stay up in the air for a very long time, and would eventually make its way to pretty much every corner of the planet. Might some places be very minimally affected? It would depend entirely on the weather patterns, but I think it's safe to say that no place would be safe in the long run.

How long would it be before the earth was safe to live on again? Safe for who? For the radiation to fade to current levels it would probably take tens of thousands of years in the areas hit by the nukes/where reactors failed. The nuclear winter itself would probably fade sooner, but might still last hundreds of years (maybe longer, who knows?). Either way, there's a good chance that humanity would not survive it all, except maybe off-planet, somewhere.

Would there be any adverse affects of the radiation? Of course. A majority of surface dwelling species would die off. Horrible mutations would likely become common place for those unlikely to survive the initial cataclysm. Over time the Earth would be reclaimed by other species, but not a for a long time.

Not the answer you're looking for? Browse other questions tagged post-apocalypse radiation nuclear or ask your own question.

11
What would happen if all 433 nuclear reactors had meltdowns?

10
In an all-out nuclear war, how long should people remain sheltered?
3
Nuking all the ice
17
Could the entire world have been destroyed by the existing nuclear arsenal in 1962?
25
Is it safe to grow and eat food on post-nuclear-war land?
5
After a major nuclear war/disaster, how much radiation would remain after ~300 years?
2
How far would radiation from an exclusion zone spread?