Is it possible to have a civilization in the core of a planet?

Or, technically, a civilization near the core of a planet.

In this question I will describe some aspect of my design, and you may comment on the realism of these aspects and add improvements, or point out something I am not aware of.

The planet will be a rocky planet, possibly tidally locked to its star so as to reduce the effect of rotation on the world within.

I am not sure what effect a major satellite would have on a civilization inside a planet, so there will be none for now.

The planet will either be too small or too old to have volcanic activities, and the layers above the level of the civilization will be solid. This also means the planet probably don't have a strong magnetic field, but this would seem trivial to a civilization living under many kilometers of rock. The core, however, is still hot enough to emit light and heat.

And just so you know, the world built here is supposed to be a bleak, end-of-time sort of place, so the "star" about which the planet revolves is probably a black-hole or something dark and useless like that.

The architecture of the civilization

This is where things get a bit crazy. See diagram below (not to scale): 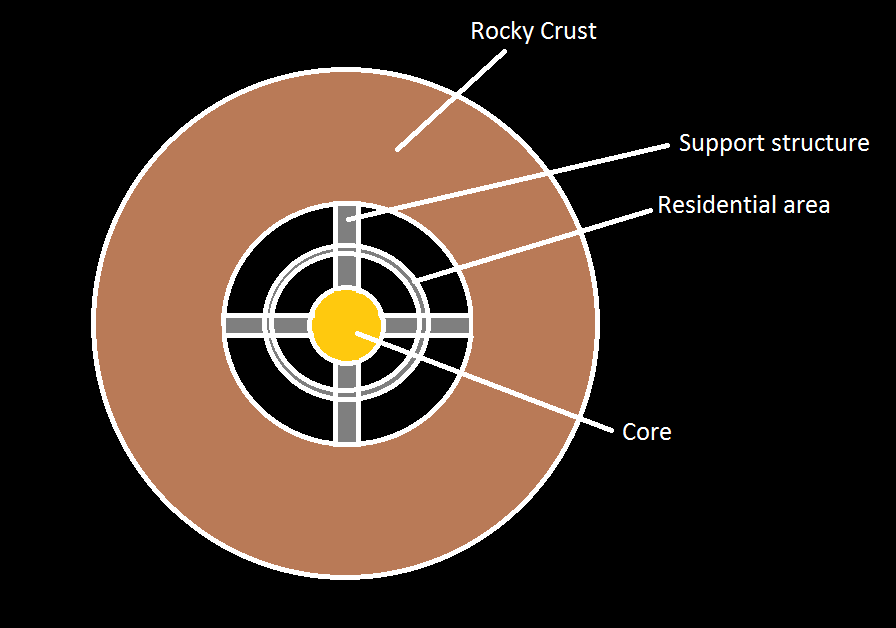 I hope the diagram is sufficiently self-explanatory. That being said, a few significant note with this design:

Life in this world

The social aspect of this world is trivial at this point, however, life on the "residential area" would have the following major features:

That concludes my design so far. At this point, I don't see any major problem beside some numbers' game balancing the melting point of the support and the temperature of the core, but if you see any, or have improvements for the design, I would really like to hear.

The crust of a planet gets pretty massive shake-ups as the tectonic plates move. Even on a planet with relatively stable plates, you're still going to experience a LOT of forces at those depths. The pressure and heat you're subjected to also grow exponentially as you descend towards the core.

Humanity has not been able to descend much further down than a kilometer or so, before the technical complications, and instability of the tunnels simply become too dangerous and/or expensive to overcome.

For you to dig down to tens of kilometers, isolate the molten core of a planet, and build a scaffold to hold the rest of the bulk of the planet up around you is simply preposterous.

If you are able to go to this length of effort simply to "keep warm", you're better off simply building a dyson sphere around your Sun, and siphoning off its energy to heat your atmosphere.

A major problem with your concept is thermodynamic.

If the core of the world is hot enough to glow it is going to be pretty hot.

However, the problem is that the rock layer above the hot core is going to be only slightly cooler than the core. The temperature profile would follow a gradient from hottest at the core to the lowest at surface radiating heat into space, the heat has no where else to go but up. So your Rocky crust would be just as hot as the core (and would also glow) making your habitable region between the 2 regions nearly the same temperature, which isn't very habitable.

A mega structure level refrigeration system in place to move heat out of the region above the core to the surface could possibly fix this, but it would be pretty huge and require an amazing level of technical ability. At this level of engineering you're basically replacing your planet with an artificial structure. Your civilization would likely be better off and it would be easier to just build the artificial structure (A Dyson sphere).

If you want this to be science-based, you have some pretty big problems to overcome:

The pressure near the Earth's mantle-core boundary is around 140 GPa, so your support structures need to withstand at least such pressures. However the strongest known materials have compressive strengths on the order of several hundred MPa, so you have a few orders of magnitude to overcome. Does your civilization have access to force fields?

To have more reasonable pressures you will need to have a much smaller world, probably closer to an asteroid than to a planet. But such a small world won't have much heat left in its core if it is a few billion years old. And also you will have a very low gravity.

As already mentioned in other answers, there is a thermal problem. Many miles of rock is a pretty good thermal insulator merely by being many miles thick. (Note that in the Earth's mantle heat transport happens by convection, but in your world the crust/mantle needs to be frozen solid.) So if you have a bare core thermally radiating into the excavated space, that space will quickly heat up and fry anyone living there. So you need to cover the core in thermal insulation, and have active cooling in the excavated area. For cooling I would recommend pumping water from the surface around to transport the heat outside. Assuming the planet has water or ice available on its surface.

And a third problem: Why go through all the trouble? Nuclear fission or fusion energy is much easier, and a civilization that can hollow out a planet should be advanced enough to have mastered fusion energy. Even on just fission energy there's plenty of fuel material available on an earth-like planet if you include U-238 and thorium in both the crust and seawater, and this civilization seems to be good at digging/mining. I guess you could just say that this world has barely any uranium and thorium, which AFAIK can differ quite a bit between star systems, but even then this civilization looks like they should have mastered fusion, and hydrogen is available everywhere.

Frame shift: encode thought in hot Ice XVIII in the core of Uranus or Neptune

First: unless Adamantium appears in your periodic table, there is no way you're going to make pillars of material to hold up a planet's core. The Earth's inner core is solid iron but it's not strong enough - the pressure down there is much more than you'd find in a pair of bolt cutters. (The thermodynamic issues are less trouble - they might be dealt with by an advanced technology like neutrino pair production for cooling) So can life be found in the core of a planet?

Well, consider superionic ice (Ice XVIII). Here's an introduction. It is a highly conductive form of ice because protons move freely in a matrix of O2-. It might be responsible for the strange, asymmetrical magnetic field of Uranus. This suggests such a material can be carrying flows of electricity, potentially usable for some sort of logic processing. It can also be physically altered akin to a computer chip, for example by doping the structure with nitrogen in place of oxygen. Last but not least, because it can be found at 3000 K or higher, it may be in contact with a liquid-like supercritical phase of water, creating the potential for dopant ions or robust chemicals to be moved from place to place.

Conceivably, your civilization might have encountered sentient life within an ice giant, learned how to encode information within its core structure, solved the hard problem of consciousness, and transferred its own thoughts to be stored in a similar planet.

Not the answer you're looking for? Browse other questions tagged science-based reality-check planets architecture engineering .

20
How would a "reversed planet" be able to exist?
9
How would a hollow, layered lattice planet work?
4
How can the Progenitors oxygenate a world?
3
What would be the chemical composition of the crust and core of a planet comprised primarily of diamond?
2
Is it possible to make a stable planetary system like this, and what would the orbits have to be?
3
Consequences of hitting a Pluto-like planet with a highly luminiferous meteorite?
7
Can a rogue planet have a habitable surface due to geothermal heat?
4
Replacing the core of a planet with a sun, could that be theoretically possible?
7
How would an osmium core affect life on a planet?