In the aftermath of the Great Chicago Fire, the initial problem with building a new cityscape is weight, a problem solved, at first, by a steel skeleton. In subsequent years, other methods would develop--mass-tuned dampers, curtain walls, pyramidal shapes, concrete cores, etc.

But nature has given us something far stronger than steel, and this time, I am not talking spider silk. 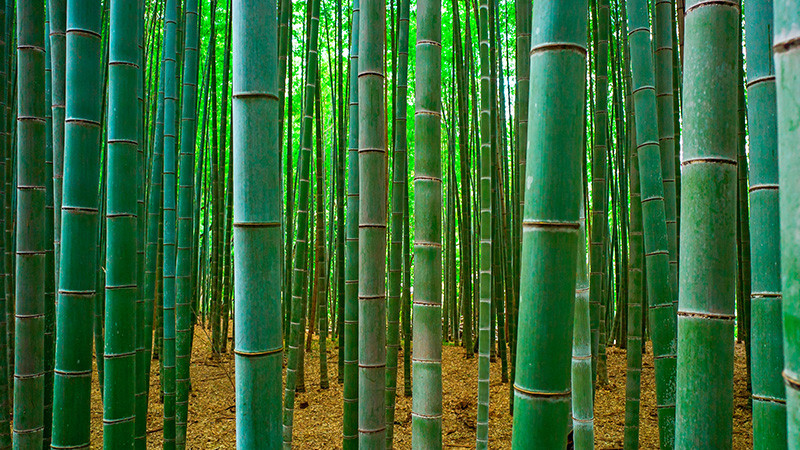 I am talking about bamboo.

Believe it or not, this overgrown grass, this panda fodder, has some neat superpowers.

Despite its lowly reputation, bamboo may be the strongest stuff on the planet. It has greater tensile strength (or resistance to being pulled apart) than steel, and it withstands compression better than concrete. Both qualities are essential to keeping the plant, which grows to nearly 60 meters but is only as wide at the base as the very top, from falling over. It needs the compression strength to hold up its own weight and tensile strength to bend in the wind without breaking. "Our concept of strength is, it doesn't move, it doesn't break," says Dan Smith, who owns Smith & Fong, the largest manufacturer of bamboo plywood in the United States. "The Chinese concept is, you've got to bend with things. If you don't bend, you break. Bamboo's strength is in its ability to bend, and that's the miracle."

This could be a great alternative to steel. The only problem is that it is a plant, and plants absorb water, and if Life After People teaches something, it's that moisture is a death knell against construction. So maybe a good painting of chromium might help.

With that out of the way, what would a skyscraper with a bamboo skeleton look like in regards to shape and size?

There are already plans for this. There is, as example, a 300 m high wood based building planned in London, which, if it is built, will beat the current record of Treet ("The tree"), a 51 m high wooden building in Norway. There are also a collection of conceptual images for wooden buildings at this CNN page, a couple more here and an overview on this popular science page.

When looking through the images, my personal feel is that most (but not all) of them do kinda look similar to "normal" buildings, but I guess that's for two reasons: 1) People like what they are used to and the architects are therefore a tad restrictive in how crazy they will go; 2) Large buildings in wood are relatively new and the architects have not yet gotten experience with what can be created. While the first conceptual images I found was very similar to what buildings made from steel and concrete looks like, there are also some crazier design which highly incorporates the organic feel of the material.

Building large with wood is not as limited as one might believe. We have very good techniques for treatments to prevent deterioration and we have a lot of experience in building with wood for other large things. A funny comment on how it is to build large in wood was from an engineer interviewed for the construction of Treet in Norway; he stated that it's easy to build large in wood, it's "just like building an upended bridge".

As it turns out, glued wood is a very good building material as the glue strengthens the wood and allow us to use other shapes than what the tree looked like. Another interesting notation is that a wooden framework is considered more firesafe than steel since it does not transfer the heat from the fire (and thus limit how fast it can spread) and it will withstand fire longer before falling, as the steel will soften and collapse even though it does not burn.

There are also research ongoing for "welding" wood; a new technique allows the wood to be "welded" together with heat and vibrations, which make it possible to skip the glue all together. Another benefit they mention in the link is that the technique allows for surface modifications so that the wood gets denser (and thus harder) at the surface, which also makes it more water resistant; the article claims that they could make pine wood as hard as oak wood with the technique.

In short, there are all the potential to build high with wood and very high incentive to do so, but what will the buildings then really look like? The answer is "whatever the architects can dream up" - I'm certain that the initial years, they will want to show off the material and make organic feeling buildings, but once tall wooden buildings are common, then any design will only be limited by the designers fantasy (and basic building principles, which will not dramatically that much for wood).
A nice example for organic looking constructions in wood is the Metropol Parasol, which will be used to create nicer city climate in Seville, Spain.

Not the answer you're looking for? Browse other questions tagged construction architecture materials or ask your own question.