Would smaller parties thrive under my voting system?

I'm trying to design a voting system where smaller parties are represented but the country still uses local representatives. I don't want to allow coalitions since they dilute the party message into amorphous blob.

My idea is to have a country with unicameral parliament. The country is divided on electoral districts. Each party nominates candidates in every electoral district. The parliament seats are split among the parties according to how many votes they've got on a country level, but which candidate is chosen depends on a how well it did on a local level.

The principle is same for multiple parties, each party receives seats according to the total number of the votes in the whole country, but their seats are distributed to their candidates that did relatively best in each district.

Will the smaller parties thrive under my voting system while people would still be able to have local representatives?

I assume that country is modern democracy.

The country uses separation of powers where parliament is only the legislative branch while president holds the executive power.

I'm open for election threshold of maximum 2%, 5% is way too much. Just for comparison Libertarian's Johnson won 3.2% while Green's Stein got 1% of the popular vote. Though theoretically there could be 25 parties each getting 2% I doubt that's what gonna happen.

I want small parties to have some voice and state funding, and occasionally be able to pass some laws when their votes are needed, but I want to avoid coalition governments like in Israel, Sweden etc.

The process goes fallowing: 1. Assign seat to the candidate that won the most votes 2. Decrease number of seats to candidate's party by one 3. Remove parties whose remaning seats is zero 4. Repeat until all the seats are allocated

Assuming D's candidate from the 47th district received most votes

Assuming party A candidate from the 12th district received most votes

"Will the smaller parties thrive under my voting system while people would still be able to have local representatives?"

Smaller parties would unquestionably thrive for such system. - this part passed

Nevertheless to have a LOCAL representative it would be a bit trickier. If you voted for a party that's not specially popular in your district - you are guaranteed NOT to have one, and your district would be represented by a member of other party. ;)

System as such may work... assuming that one would put some election threshold, otherwise parliament full of squabbling parties build out a few or one member of parliament would be ungovernable. https://en.wikipedia.org/wiki/Election_threshold

Imagine that you have 100 districts for 100 representatives. There is a small party that would be supported by 0.8 to 1.1 percent of the voters. They could get one representative in if they run a halfway credible candidate in each district. Which of their 100 candidates gets in will be pretty much random chance -- voters might prefer one of the 100, but they can't influence where they get to vote. Perhaps they have more support in the northern part, but their most influential leader was born in the southern part (and isn't going to move).

And of course your system might still require coalitions. Like any proportional representation system there is a very high likelihood that no one party gets the majority.

Also, it is possible that one district gets two representatives and another gets none. Imagine three equally large districts and three parties:

Your system is quite possibly going to work. Smaller parties should be represented okay in this system.
Since a democracy must respect its minorities (lest it be an olchocracy instead), attempting a fair representation of voters is a must anyway.
You may want to make sure to have (in average) more than one seat per electoral district. The higher the factor, the closer the result resembles the national spread of votes.

Now, to the local representatives: This depends directly on the number of seats per district. If you went to extremes and had 100 seats per district, every percent of the district votes would be respected. On the other hand, with one seat only, you will have districts where the candidate who got the majority still doesn't get a seat because a member of a smaller party has a right to it (say, one party has the majority in every single district and 60% of all votes in the country, then 40% of the majority winning candidates - most likely those with the lowest votes - could not get a seat because other candidates had to be respected.
Which begs the question: Which candidate will get the seat? Will they be given to those candidates with the highest votes nationwide, or does it have to be a candidate from the respective system?

As you can see, it's not trivial to determine a truly just and fair system. As i wrote in the comment to your question, you may want to take a look at different countries' approach to this question.

Mind you that a unicameral parliament has its own problems ("who watches the watchman").

Most real life proportional representation systems, ranked ballot and other alternatives to "First past the post" fail multiple sniff tests, but the key one is the representative in the district (riding for Commonwealth readers) is not representing the voters, but rather to a creature of the party. In full on PR systems, the candidate is not even a representative except in name, but rather comes from the "Party List", which voters don't even control.

And of course, smaller and smaller parties begin to have outsized influence on fractured coalition governments, since the ruling coalition might be willing to sacrifice any principle to gain that one our two more seats needed to make a functional majority. Israeli citizens I have spoken to hate their PR system because of the outsized influence of ultra religious parties. You can imagine a socialist coalition government trying to form and realizing the last votes they need would come from the "National Socialist" faction (as in "National Socialist German Worker's Party" sort of National Socialists).

OF course this can also work the other way, if no acceptable grouping of parties can get together and form a working majority in parliament, then there is literally no government (Belgium was without a government for a year because of this, and it now seem routine for a period of months to pass after an election in Europe while back room manoeuvring goes on to form the coalition). Either of these cases is not healthy for democracy or representative rule at all.

The case of the recent US election demonstrates the wisdom of the American Founding Fathers. The Electoral College system prevents pockets of dense population from overwhelming smaller, less populous States, and ensures the successful candidate for President gets a plurality of votes across all regions of the nation. 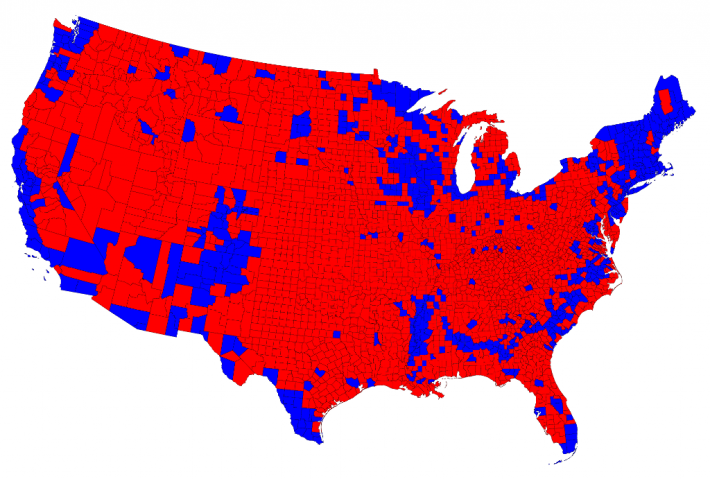 The US 2016 election by county

So inducing complexity on the voting system in order to ensure smaller, less representative parties will gain seats in the Legislature will probably not have the effect you desire. The tiny pockets of "Blue" will end up dominating the legislature and passing legislation against the wishes of the majority of the population, or deadlock the government so that nothing can be done in an expedient manner. In all cases, political decisions will be made in back rooms and behind closed doors as parties try to thrash out compromises and make deals to get those critical last votes, the opposite to the open and transparent systems most voters want.

The voters will not be directly represented and have no one to hold accountable at the local level, and I suspect that if voters are not being represented, they can either choose to opt out of electoral politics altogether, or start banding together against the political class which imposed these systems upon them.

We see both answers today; low voter turnout, and surges of "populist" parties gaining power in legislatures around the world, and referendum results like the Brexit and the more recent "No" vote in Italy against proposed reforms to the system of government. IF people don't have that way out, then the next steps will be much more violent and less democratic....

This sounds like a recipe for coalitions and potential disaster.

First of all, I don't know if it's possible to allow smaller parties to thrive while avoiding coalitions. If no single party has a majority, then they are going to need to work with other parties in order to get the things done that they want to. This naturally leads to forming a coalition with one or more other parties that whose ideologies are reasonably similar.

I'm not sure why you're averse to coalitions, though. Using the US as an example (because that's where I live so it's the one I'm most familiar with), the two major parties are probably not that different from a coalition that might form elsewhere. They need to have a broad message that appeals to a large number of people, so their party platform ends up being just as diverse. So in some ways, the Republican and Democratic parties are really the Republican and Democratic coalitions.

However, the biggest issue with this is the instability it will cause, and the inherent dissatisfaction that can lead to. For example, consider three seats and two parties, where each district votes fairly similarly:

In this case, A will win seats 1 and 2, while B wins seat 3. However, if in the next election it changes slightly:

Now we have party A with 46% of the vote, party B with 31%, and party C with 18% of the vote. So now A wins seat 3, C has to win seat 2, and B gets seat 1. This means the candidate in district 2 definitely has an incentive to start their own party, rather than risk losing their seat just because they didn't do quite as well in their district as the other did in theirs.

This will likely to lead to a proliferation of small parties, so a coalition scenario is all but inevitable. Also, I really can't say what this would do to the government - a system which rewards people backstabbing each other politically makes me think it will rapidly become very dysfunctional.

Your system seems complex but no less so than any of the multitudinous ways of counting AV/STV systems. Half of which need a degree in maths before you begin contemplating them.

However you've not found a way of handling a fundamental point of supporting smaller parties, that being: Multiple smaller parties means coalition governments. You've specifically said no coalitions, but as soon as you start handing seats to small parties you're going to break the simple majorities of the big parties and coalitions will become a thing.

You've mentioned threshold minimums, which is the way to stop the system getting out of hand, but said you want to keep it low. That's the wrong approach, you need to keep it high to get your coalitions down to maybe 2-4 parties rather than 7-10. The higher the threshold the fewer parties in coalition.

Your example: you seem to be under the mistaken impression that parties win a majority of the vote. They don't. They merely win enough of the vote. An actual majority in a multiparty (>2) system is really quite rare. https://en.wikipedia.org/wiki/List_of_United_Kingdom_general_elections 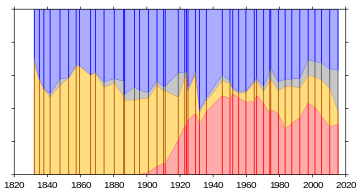 Not the answer you're looking for? Browse other questions tagged reality-check politics government or ask your own question.

4
Consequences of democratic reform
3
How would it affect society and politics if you have to pay for each vote?
5
Voting system openly based on money, would it work and/or be accepted?
0
Token based voting system
74
What would be the possible issues with an IQ based voting system
36
Keeping unelectable opposition on life-support?
21
Making political system that encourages extremist parties?
4
What weaknesses could someone exploit to manipulate this “Approval plus RCV” electoral system?
8
Balanced but Factionally Divided Government System for my Mars Colony