In OTL, Takeda Katsuyoui, son of Takeda Shingen leads his clan to battle against Oda Nobunaga and Tokugawa Ieyasu over the objections of his father's "24 Generals" (high ranking military advisors and war leaders). While the Takeda's were in a strategic location and capable of fending off potential challengers for the unification of Japan, it was always clear to Takeda Shingen that they were only strong enough to maintain the balance of power, and could be defeated by the combined might of other clans, or if they threw in with another clan, they themselves would be subsequently defeated.

However, Takeda Katsuyoui was rash and ambitious, and at the Battle of Nagashino, led waves of his cavalry and infantry against the forces of Oda Nobunaga and Tokugawa Ieyasu, who were sheltered behind wooden palisades and shot the oncoming forces to pieces with volley fire from their matchlocks. Cinemaphiles may watch a stunning recreation of the battle at the end of the film Kagemusha. 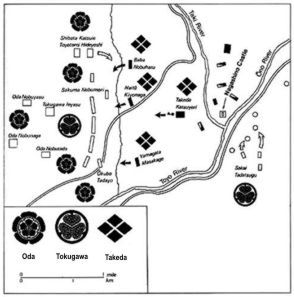 So in an alternative universe, Takeda Katsuyoui still wants to defeat the forces of Oda Nobunaga and Tokugawa Ieyasu at Nagashino, but is willing to listen to suggestions by his "24 Generals" once he sees the wooden palisades and gunners arrayed before him. What changes to his strategy (including changes to his force composition and equipment, remembering this is 16th century Japan) should he make to defeat the enemy and give the Takeda clan the opening to unify Japan and take the Shogunate? As the daimyo of one of the most powerful clans in Japan, he is not going to take "no" or "retreat" for an answer, so be prepared for ritual suicide if that is your solution....

This battle can be compared in some ways to a reverse of the classic bypass of the Maginot Line by the Germans at the beginning of WWII. Oda and Tokugawa have their forces nicely dug in with wooden barriers in place to protect them and sophisticated (for the time) firearms to kill enemies from a distance as they approach the line. Basically, they have a prepared, fortified position with superior firepower at range.

To defeat them, think the same way the Germans did when faced with the elaborately prepared Maginot Line. Again, it was incredibly well dug in, with basically invulnerable gun emplacements that could totally control the direct approach to the Line. Simply charging at it would have resulted in a catastrophe. The Germans simply flanked the line, went around, and attacked from behind.

To the same extent that an enemy is dug in and prepared, they are also nailed down in one spot. The more dug in they are, the less mobile they are. If they are immobile, you should be MORE mobile (paraphrasing Sun Tzu). There is a story from Israel that before the 1956 war, Moshe Dayan was inspecting his troops at the front line with the Egyptians. They proudly showed him an array of elaborate trenches that they had just spent days digging. Dayan is said to have immediately ordered the men to fill them in, saying (again, paraphrasing) "We are outnumbered 6 to 1. If we stay in one place and wait for them, we will lose. The last thing I want my soldiers to be doing is sitting still; I want them charging forward!"

So, Takeda should do this: Line up some infantry that are not too fast, but carry banners and polearms and whatnot. Make them look like a bigger force by staggering the formation and tying more banners and whatnot to their packs. This infantry has to be brave, because they have a dangerous assignment: they are going to feint right at the center of the enemy forces where they have their barricades set up. It's even better if he has someone who looks like him with his personal banner on a horse with this group, so the enemy thinks this is the main attack. If he wanted to be really tricky, he would give this guy his own personal armor.

The more mobile elements (Mostly cavalry) set out before this attack launches, use cover of darkness, and bypass the wooden screens, coming at the enemy's flank from the top of your map (I assume that's North?). If he has enough men, he can split his force and have the second group do the same thing from the other flank. This is very risky though: I would probably keep all my cavalry together in one huge mob and count on morale and momentum to keep them rolling forward once they overwhelm the northernmost enemy position.

He still has a very tough fight, but if the main bulk of the enemy have already started firing their guns at the decoy force, they aren't going to want to stop doing that when they hear something going on elsewhere. Plus, the guns of the time put up a lot of smoke, which will add to the time it takes for them to figure out that they are shooting at ghosts. Meanwhile, you have to totally destroy the northernmost group, push forward, and hopefully start a rout before the enemy can react. You move to the next small group with your entire force before they can abandon the now useless firing line emplacements, and if you keep up a very fast pace, you may be able to concentrate your forces against a dispersed enemy and take them out piecemeal.

Considering that Katsuyori did literally everything wrong in that battle, there are a number of things that he could have done differently.

Facing an army three times your size isn't the best in the first place. If he abandoned the siege and used the superior mobility of his cavalry forces compared to Nobunaga's gunners, Katsuyori could have struck at an easier target.

Heavily armored cavalry are most effective when used on an unsuspecting enemy. Attack at dawn before the day the battle actually occured, or even better, attack the enemy camp late in evening the night before.

Cannons were around in Japan at that time. At the very least, they could be bought from the Dutch. Retreat and buy some canons. Shattering wooden stockades with cannon then a heavy cavalry charge into the carnage sounds like a good strategy.

First - Samurai did not use guns, they were a peasant weapon after all. Unfortunately for Katsuyoui, matchlocks proved to be far superior to horses and traditional tactics...gunpowder is a game changer in war.

And Second - Katsuyoui won a battle earlier in a similar setup and he assumed these tactics would work again. Oda on the other hand learned from his earlier defeat and heavily prepared. Katsuyoui made no effort to scout enemy positions and used the same tactics that won earlier for him. Scouting his opposition prior to the attack would have told him his straight charge at a fortification he couldn't breach was a bad idea. Katsuyoui badly underestimated his opponents ability to adapt (If you forgive the example, He figured rock would crush all forgetting his opponent could choose paper) and the effectiveness of their firearms.

The biggest change he could have made was to attack the night prior. June 17th saw a heavy torrential downpour. Oda's forces effectively preserved their gunpowder stocks keeping it dry for the eventual battle on the 18th. There was water on the ground and a muddy environment, however it was ultimately a dry and sunny battle. Had Katsuyoui attacked on the night of the 17th during the heavy downpour, Oda's muskets would have been rendered ineffective as they did not function in the rain. Whether this would have been a win for Takeda forces is another matter to speculate at, but it would have given Takeda's an additional advantage.

Not the answer you're looking for? Browse other questions tagged warfare alternate-history .