What would limit the size of a sail-powered sea cargo ship using modern (or near future) technologies, and how big could we go?

Fossil-fuel-powered shipping is obviously much better than old-school sail-powered ships for moving cargo around. But if winds were predictable, fossil fuels rare and solar/nuclear power not an option (for whatever reason) how big could we build cargo sailboats?

We can obviously do better than most modern sailboats, since they are typically smaller than vessels from before the internal combustion engine made them obsolete. But what would be the limiting factors in the size of sailboats nowadays? Could they be as big as a modern supertanker? (I doubt it). I guess the stresses on the masts and sails would be the major challenge?

No limits*, but go with kites.

You can read more on Wikipedia. Long story short, kite sails are already used on ships of various sizes, especially big ones. Sure, not as the only propulsion system, but not due the lack of power. Problem is in wind unpredictability, but that's not true in your world.

Current kites supplement up to 20% of power to a freighter. But that's limited by the fact that these freighters wasn't built to be pulled, but pushed; it's a retrofit. Using 5 times larger kite with hull designed for that, with stronger front and lighter back, shouldn't be a technological problem. Shouldn't even make ship look substantially different.

While I don't have the math to work this out, some examples from the real world suggest you could actually get pretty impressive performance if you change your thinking about the sails.

The America's Cup had a problem when designers started going way outside the box. Giant catamarans with wingsails are not, strictly speaking, yachts, but they certainly moved far more quickly than any conceivable monohull. The efficiency of a wing over a fabric sail in converting the wind's energy into motion is the key: 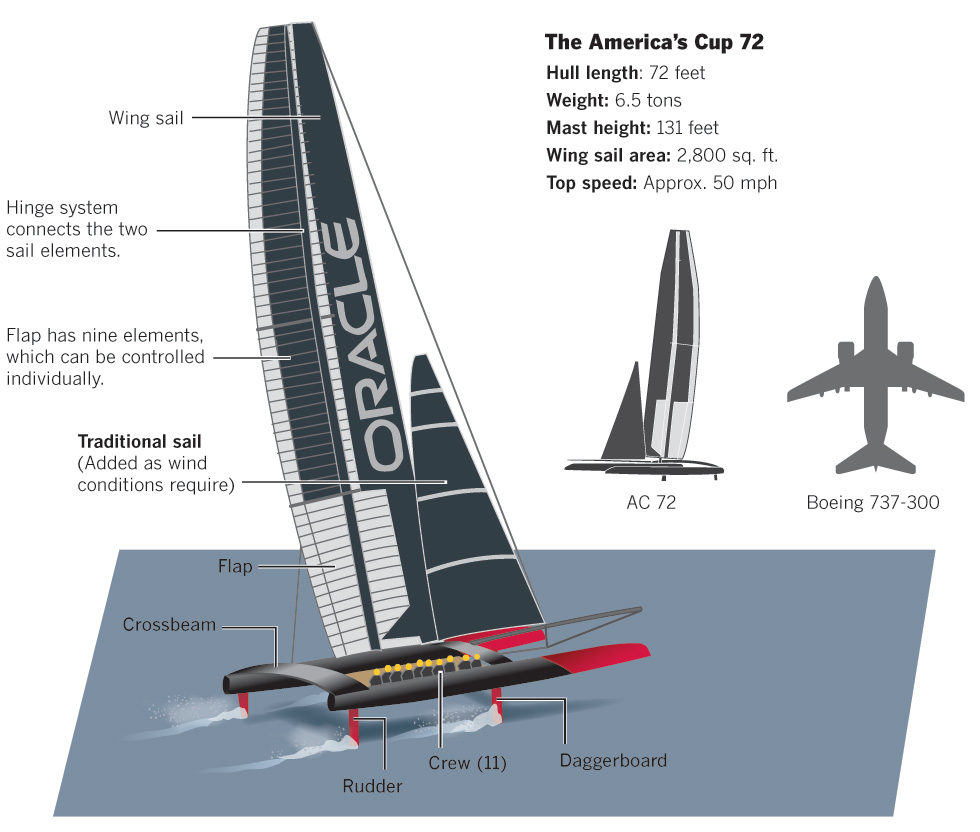 Of course, as you can see in the graphic, the "wing" will have to be enormous, or you might need to have the deck studded with wings, something like a triplane laid on its side.

Even more extreme designs exist, such as the world sailing speed record holder "Sailrocket" where the sail provides both lift and thrust. How practical this would be for a cargo vessel is questionable, but a fast packet to bring valuable cargo or mail might take advantage of this sort of technology 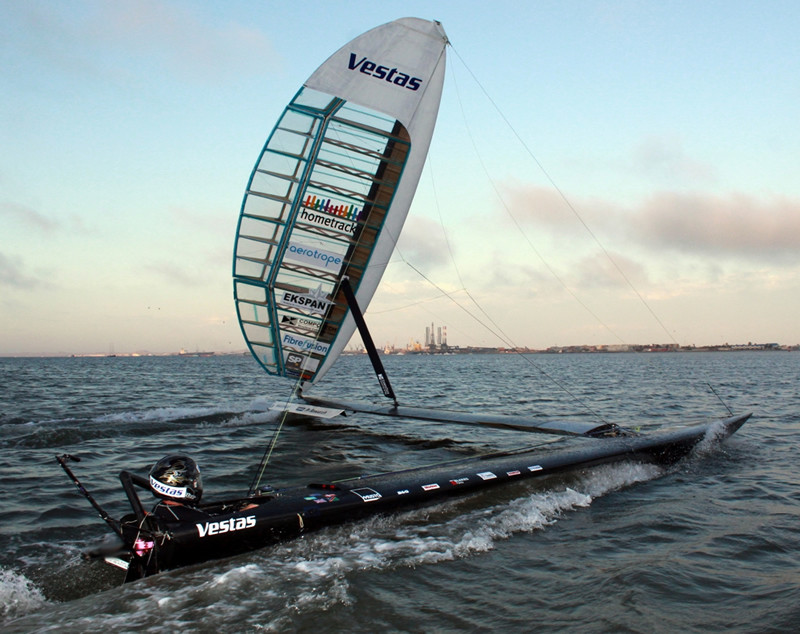 The key to both these designs is the rigid sail, which does not dissipate energy through flexing or flapping like a non rigid sail. Even a schooner rigged ship replacing the rigging with three wings should see a considerable increase in performance for that reason alone.

So if you are not keen on kitesails, then wingsails is the way to go.

A sail ship could be designed as large as a modern supertanker if we wanted to do that. There are a number of ways that we could harvest wind energy in order to move the ship. The so-called "rotor ship" concept is one. We can use what are effectively wind turbine towers instead of sails that can utilize wind from any direction and basically any velocity and sea condition. Combine that with kite sails deployed when possible, and you have a very efficient combination that will reliably move your ship if there is any wind at all.

The largest sailing vessel without an auxiliary motor ever created was the Thomas W. Lawson at 145/120 m, mast-stern/deck, a third the size of a super tanker. This ship was ironically designed to haul oil and coal.

The main limitations of this ship were difficulty in handling her near ports, if such large vessels were common, ports would have to be outfitted to handle them.

I would imagine straight docks, lined side by side, with retractable bridges connecting them. Each vessel would be guided into their slot with a rail system, and then leave port in the opposite direction, vacating the need for tight turns.

It is important to note that tug boats would be completely impossible, but by optimising large harbours in the above manner, we get rid of the most problematic aspect of sail powered super ships.

Such large ships would still yaw terribly, and require very strong winds to sail on course. It is likely that this size is the largest possible, and quite possible that such a ship would be too large to be used practically in high amounts.

Modern ballast technology might be used to prevent the possibility of too great yawing and potential capsizing, but no technology can increase the available wind.

One idea would be to make ships broader, and potentially outfit them with two sails side by side, but I have no idea whether this would create too great a stress on the deck, and I suspect such a ship would tear itself apart.

I'd say you could easily scale the large sailing ships of 1900 by a factor two (-> 220m long or so), giving a factor eight in tonnage (-> 40 000 tons). Modern materials and technology keep the crew size in the same region, 40-50 people. Going away from full-rigged to schooner rigs or multi-mast sloop is possible with modern fabric and keeps crewsize further down.

Speed of practically any kind of ship scales with the square root of lenght, so you'll get around 14 knots average, unless you have a route with just very little wind. Modern weather forcasts will help here, too.

Port maneuvers are helped by an electric bow thruster powered from a towboat (pusher) that runs on batteries charged on land. Towage was a huge problem at the time, when slighly adverse wind conditions at the port could allow tugboat owners to extort the profit of the whole voyage. Definitely something you want to organise. Or you spend a small amount of the wind power available during the voyage in water electrolysis and do port maneuvers with your own hydroelectric generator. Probably worthwile, you definitely want to have high power emergency engines.

Since you have predictable wind power, you could potentially set up wind farms (not attached to ships) that produce electricity to power large electric motors. As long as you have some energy store for this electricity (big efficient batteries) you can perhaps make motor boats much like the ones we have today with electric motors instead of combustion engines. Another alternative if batteries are lacking, might be a boat something like an aircraft carrier with wind turbines on top powering an electric motor underneath.

That said, it is probably less efficient to go from wind, to electric, to propulsion than to just go straight from wind to propulsion, but I don't think you have to be limited by things like mast-size if you have a predictable source of energy somewhere and a way of storing and retrieving that energy later.

Engineering-wise, the question on the size limit has a lot in common with the limitation on the weight of an aircraft. You have to consider the strength of available materials, when subjected to forces that attempt to bend or buckle them. As the length increases, it rapidly becomes impossible to make a sufficiently rigid wing (aircraft) or mast (sail).

I don't know what this limit translates to for a ship, which can have quite a few sails along its length. For an aircraft, the existing heavy military transports are pretty close to the limit.

A kite provides an exception, because it is built of fabric and cables, all of which are in tension. Nothing rigid to be broken or buckled. Same advantage as a suspension bridge over any rigid bridge.

Would you count a Flettner roter using the Magnus effect as a “sail”?

Veritasium has a video on the Magnus effect and its usage in boats and planes. These boats with spinning cylinders rather than (or as well as) traditional sails can get quite large. A Gizmodo article refers to them as mega-ships, and describes Flettner rotors being retrofitted to a 110,000 dwt (Suezmax) tanker. The efficiency gains are tricky to calculate, and these Flettner rotors are intended for supplemental use in addition to an existing engine, but with more predictable wind conditions the calculations involved would be simpler and this type of vessel could become common.

Apart from the obvious problems of materials etc, the bigger the vessel the larger the sail would need to be to have sufficient drag (or whatever it is) but there would be a point where the mast and sail would risk overbalancing the vessel (unless it was extremely wide or had an extremely large daggerboard) so I guess that would be a limiting factor, a kite would be a good idea too...

Not the answer you're looking for? Browse other questions tagged technology earth-like technological-development nautical or ask your own question.