Alternative to writing for creatures without eyesight?

We know that cave-dwellers who live in lightless environments well develop traits such as transparent skins, barely functional eyes (or completely blind) and other enhanced senses to replace eyesight to help them "see" in the dark.

Off the top of my head, I'm thinking of maybe something similar to how ants communicate using pheromones, sounds, and touch.

I supposed it depends on their strongest sense as well. Human eyesight is extraordinarily developed, which works well with reading.

Civilization developed writing first for business accounting purposes. In order for that to transpire in a sight-less civilization, you need a method for making records that last on a timescale of years, can can be 'inscribed' and 'read' with one of the other sense and minimal technology. After all, the invention of writing in Sumeria required only pottery as a pre-requisite technology. Here are some possibilities:

Touch: This is the simplest comparison. Braille would work just fine. Also consider that the original Sumerian cuneiform was made with impressions in a clay surface, and could have been read as braille. There are other systems based on knotted cords, or your people could even use a small variant of an abacus.

Hearing: I can't think of any way to preserve hearing with pre-Bronze age technology. There are theoretically ways to record the vibrations of spoken word in a solidifying crystal, for example, but I don't see how you could utilize that with minimal technology.

Smell: How well developed is the sense of smell? If smell markings can be locationally identified by these people's nose to within a centimeter or two (something a bear's nose can probably do), then a surface could have 'smells' applied to it in a pattern. With 10 or 20 different 'named' smells, you already have nearly the utility of an alphabet; or you could use combinations of two or more smells to replicate the versatility of hieroglyphics or Chinese characters. Smells would have to common from common herbs and minerals that have distinct smells (think lavender, saffron, fresh clay (kaolin), and sulfurous--like the mineral pyrite)

Smells would have to be 'preserved'. This can be accomplished by mixing the smells with an oil-based varnish. When you rub your hand over the surface, some of the scent molecules are disturbed an released, effectively making a scratch and sniff writing system. Only works for extremely sensitive noses.

Taste - I don't know if this would be that effective. You can't just go around putting everything in your mouth (I keep telling my 1 year old daughter).

A number of peoples in the Americas made use of strands of knotted thread. The placement and type of knot would carry meaning from the knotter to the person who "read" the thread. While I believe these were mainly used for very simple accounting, I can't think why, after millenia of development, a full-fledged writing system couldn't be developed from intricately knotted reels of string.

In addition to records perceivable with one or more of the 4 human senses other than sight, many animals have senses humans don't so records stored in those mediums could be possibilities. For example:

Taste: Also, records could be stored as tastes if the anatomy and society manage to have acceptable means of reading the records. For example, catfish have taste sensors all over their bodies, so simply by touching taste records, an entity could read them.

Hearing: For hearing, perhaps some material is developed that resonates with a specific frequency when rubbed. So, an "alphabet" composed of sound frequencies could be possible--imagine beings running violin bow-like implements sequentially across a series of sections of this resonate material, and then listening to each frequency, just like we listen to syllables of speech. Also, ultrasound and infrasound frequencies could be possibilities.

There is a highway in Europe with grooves cut into the pavement. As you drive over them at the correct constant speed, a song plays. It's similar to how a phonograph record album works.

Tonal languages rely a lot on pitch as well as pronunciation. Words and songs could be carved into grooves of the cave wall and played by dragging a thumbnail or instrument across them. Knots were mentioned in another answer, and work the same way when dragged across some sort of amplification bowl.

In the musical theme, and somewhat related to Thom Blair III's answer, glass harmonicas could serve as notepads.

Many cultures preserve a lot of knowledge through song. Its repetition and group reinforcement means the information doesn't mutate as quickly as with individual storytellers.

But don't discount individual memory. Your librarians might not have books, just their memories, and spend their idle time reciting to each other as practice. One could probably wrap a whole economy around these people.

There's a lot of great answers on other senses, so I'm just going to consider: why wouldn't these creatures use methods similar to ours in the first place?

The creatures could harvest or farm a bioluminescent ink from local creatures in the underdark, and use it for writing records. It would glow faintly (either in a visible spectrum or otherwise; see also below), allowing it to be seen, even in the dark. 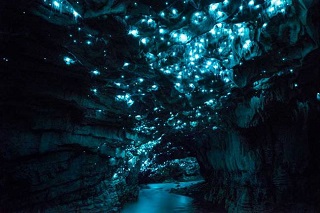 Rather than relying on the visible spectrum, they could use a heat-contrast system coupled with IR vision. This could be a high-tech system (much like how we now use spreadsheets rather than abacuses and papyrus), but it also has a biological precedent: according to the ASU, snakes such as pit vipers, some boas, and some pythons can see in infrared. 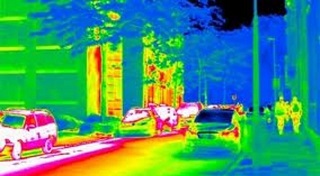 An infrared view of a city street.

This could be a natural or a technological adaptation. Think of walking into a nightclub with UV lighting - things glow brightly. Again, there is a natural precedent for this: the ACU again reports that jumping spiders, bees, and rats can see in ultraviolet. 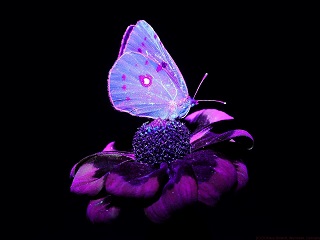 A butterfly and flower seen in ultraviolet.

Fit it into your plot

The great thing about these methods is that they allow 'normal' humans to interact with and understand the systems in use, allowing lots of potential for storytelling (in terms of cross-species communication attempts, as well as miscommunications based on how humans in your chosen setting already use IR and UV technologies).

Carvings are made into stone (could be used for wood too) that represent an alphabet. The strokes could be felt with the fingers as a sort of braille.

Of course there's still the problem of finding the Ogham script, but I'm sure they could have a system for that (always on the left side of a doorway or something)

I was gonna write everything everybody wrote, but they beat me to it, I swear!

Anywho, in SciFi you can find such creatures as Orson Scott Card's Formics, that preserve knowledge through genetic hereditary memory

Also see the Na'vi's Tree of souls, a kind of bio-computer tree thingy.

We don't know of anything on Earth that can do what the Formics/Zerg/CompTree do, but I think it's a cool option for worldbuilding :-)

Some options I don't see mentioned here are Genetics and Chemistry. Consider the Tyrathaca from Peter F Hamilton's Night's Dawn Trilogy. They are a hive species. All information is passed from the breeder class to other classes via chemical "downloads." All breeder children are educated via such downloads as well. This allows information to be passed from generation to generation completley unchanged.

Maybe a combination of the two - audio and braille plates that are combined to form a new type of language.

Or you can try something like what Avatar has with connecting your hair to tree branches that allows you to access historical records.

One may imagine storing information on some comb-like biological structure such as the (small but very numerous) ribs of some common animal. (Another possibility is to use some kind of bush, the branches of which grow in very regular patterns, but that wouldn't last as long.) The creatures could break off certain ribs and, by touch, count how many there are between each gap. This forms a unary number system that can be used to encode data.

A basic alphabet or syllabary system could be used to "write" down data. 1 rib - gap - 2 ribs - gap - 1 rib might for instance represent a "sha" sound or something. Furthermore, gaps of more than one rib may be used to separate words while even longer gaps could also be used to separate chapters, allowing the creatures to drag their fingers/whatever quickly across a text to find the start of the next chapter and more easily navigate through the text.

Several rib cages can be strung together with some kind of thread (to keep long texts in order) and folded/rolled up into something similar to a book/scroll.

Furthermore, if you want a bit more of a strange or "alien" feel to it, you can have the two sides of the rib cage encode different but connected information. Perhaps the vowels are on the left side while the consonants are on the right side, having the creatures use two fingers/whatever to read both sides at once.

26
How would a creature see with two pupils in each eye?

11
A species developing writing but not (yet) speech
3
When is the earliest I can hope for a culture to create Featural Writing?
4
What goes into making a good writing system
4
How would a society without linear alphabetic writing have devised human-readable computer inputs?
24
Scientific Naming Conventions for Alien Creatures
12
What factors would affect the choice of direction of script writing to the inventor of a new writing system?
11
How would a civilization without reading and writing develop general-purpose computers?
18
How do governments keep people accountable for contracts and oaths in a civilisation without a writing system?