Why would a fire dragon still be afraid of torches?

I can understand that all animals would instinctively stay away from a fire, however for a fire breathing dragon to be warded off by torches seem puzzling to me. What could help explain such ironic behavior from a fire dragon?

Remember, the fire-breathing dragon breathes fire for some reason. Even if the dragon doesn't realize that it breathes fire, the ability almost certainly evolved together with some particular set of behaviors. Most likely, this reason can be summed up as one or both of:

If the dragon breathes fire in order to defend itself or someone it deems worth protecting (mate, offspring, ...), then for other dragons to have a fear of the fire of another reduces the risk of greater injuries. This is typical of aggressive behaviors: they are rituals that have evolved to increase the chance of both individuals living another day.

If the dragon breathes fire in order to attack others, then fire-breathing is a very aggressive or predatory behavior to which other dragons will very likely have evolved a response to either fight back, or flee. Fighting back increases the risk of injuries to all involved, and "fleeing" can easily be called "to be afraid" of whatever the individual flees in response to, even if there is no such intellectual response.

When, presumably a human, carries fire, then the human takes the place of the other dragon. Unless the dragon's default response to another fire-breathing dragon is to fight back, even if the dragon can tell the difference between a human and a dragon, the dragon may well fall back to trying to increase the distance to the fear-invoking stimuli: the fire. In which case a human, anthropomorphizing, is likely to call it "afraid of fire".

Fear is simply an evolved response to situations that have turned out to be dangerous, for which evolutionary pressure ensures a particular response that increases the chance of the individual not being injured or killed.

Find a way to explain why a dragon would be afraid of another dragon's fire, and it's very likely that the same mechanism would apply in the case of a human with a torch. Or, failing that, a flamethrower.

They are not really fire-proof

Much like ruining a dishwasher with water, you can burn a dragon with fire - if you direct it to a weak spot. There's no reason why the outer belly of the dragon should be fire proof.

Also, when it breathes fire, the fire doesn't stay close too long. It's most likely created outside the body. Fire is much more dangerous when someone pushes it at you. 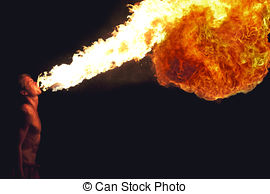 Would he run away in a fire? Quite sure he would

One non-magic system people use to explain dragon's fire is that they store gas in their bodies and ignite it while blowing it out.

With this system, a dragon is highly flammable and needs to be really careful around fire, like a petrol tank or a hydrogen airship.

You can’t scare it simply by having fire. You need to work with with its natural instincts of dominance behavior and teritoriality.

Male dragons posture to each other including displays of fire, essentially to show their fitness. Why fight if you can figure out who would win if they did?

People have discovered how to use their torches as a supernormal stimulus to trigger the behavior of a dragon seeing an overwhelmingly superior rival laying claim to its territory.

Many things burn. Wood. Flesh. But in that flame could also be various toxic substances. Perhaps dragons do not fear flame so much as smoke. When dragons set whole towns on fire, they know that there may be alchemists or other industries that use dangerous materials. They learn quickly to stay away from smoke.

He doesn't know he's breathing fire, he just knows that he's doing something in self defense.

And a torch is a heat source which might be threatening his or her little ones.

And a burning torch makes sometimes weird cracking noises and since dragons have very fine ears, the noises are disturbingly unpleasant.

And the smell. Dragons have very fine noses and the burning guano in the straw really is disgusting for dragon noses.

And you cannot eat it. The dragon once tried to eat a large torch and seriously burned his palate.

Perhaps it is like this: A knight is skilled with a sword and may kill hundreds on the battlefield using this deadly weapon. However, even while wearing the best armor, the knight isn't standing still against an attack against another sword yielding knight. He will move to avoid being hit by the opponent's weapon. The Dragon's weapon is fire which he may yield skillfully in battle, but he is not remaining still while others attempt to burn him.

Learned behaviour.
Like staking an elephant or Pavlov's dogs.

When the dragon was young and more fragile it had a bad experience with some trappers who thought it would be fun to hurt it with fire.
Mama dragon tracked it down, rescued it, and ate the trappers, but the image of the torches stuck with it.

As I recall it from the Old stories, dragons fight each other with their fire -- and have for eons before we came along. They are only relatively fire resistant, not fire proof.

Usually dragon magic (and/or very spicy food) can be used to up the heat of their fire. The temptation to use Alchemical help for fire and flight have recently become a problem....

Alternatively to the answers above, it's learned behaviour. Young dragons, when they first learn to breathe fire, quickly figure out that they need to exhale very hard, otherwise the flame goes up their nostrils or down their throats, and hurts. The flaming torch triggers this behaviour and they instinctively shy away.

The answer is simple. A fire-breathing dragon is afraid of fire for the same reason a gun-bearing soldier is afraid of guns.

Fire is a waste product of fire-breathing dragons. Breathing fire, for a fire-breathing dragon, could be the equivalent of humans using human waste as a weapon. Consider it similar to a human mailing a turd to someone, or dropping one off on someone else's doorstep. This might not be so difficult psychologically to commit, but it is likely to be highly aversive if the same person becomes a victim of someone else doing it to them.

If they exist in your would, dragons may not be intelligent enough to distinguish them from torches. Especially if molotov cocktails come with throwing handles like German WW1 grenades.

Throwing one at a dragon may actually be an effective way to kill it, might burn through its wings and ground it, and generally be well worth avoiding for the dragon.

They might seem to be, but what they really don't like is temporary blindness from some puny human waving a lit stick around just after being woken up from a nap in a dark cave.

If I have a katana and you have an exacto knife, the only reason I'm still afraid of you is because I don't know how to use one and I'm not a violent person.

I suppose only those people who have met incompetent and timid dragons have lived to tell the tale.

A lot of modern depictions of dragons make them basically a biological lighter/stove top. The fire isn't inside them, they blow out a stream of fuel and ignite it as it comes out. So their ability to produce fire doesn't mean they will be immune to it.

While the face would likely be heat resistant, and perhaps the scales would have some fire resistant properties to protect them from the breath of other dragons, they are still flesh and blood creatures and fire can still hurt them.

Also, if you manage to ignite the fuel pouch, the results will probably not be pretty...

Much in the same way that the human oesophagus and stomach can withstand hydrochloric acid (used to digest food), a dragon's throat and mouth can withstand fire, but its skin cannot.

A dragon doesn't fear its own fire that it's using as a weapon, but recognises the danger the fire of others represents.

Just going by the title of the question, why would a fire dragon be afraid of fire, it just wouldn't under normal circumstances.

By definition, fire dragons breathe fire, live in volcanoes, and generally absorb fire-damage and turn it into health. In many ways fire dragons are the physical embodiment of fire-magic itself.

So, to a healthy fire-dragon, a blast of flame is the very essence of vitality itself.

In theory, too much fire could overload it, like a battery being charged with too much electricity. This could be a cause for fear.

The only plausible way is if the dragon had gone insane, very insane, and was afraid of fire, the equivalent of being afraid of one's own shadow.

Not the answer you're looking for? Browse other questions tagged psychology dragons fire or ask your own question.

30
How effective would Dragon-Dragoons be?
5
Domesticating dragons
60
From which point on would including a dragon on one side of a historical battle not be an instant victory?
3
How to explain fire-breathing feathery dragon extreme mating behavior?
7
Would Game Driving be a viable strategy for dragons?
26
Why wouldn't dragon-hide make me fire-resistant?
9
How would a well-equipped Renaissance knight mitigate a dragon's fire breath?