The most obvious way of doing this is to have the atmosphere over most of the planet significantly reduce the received radiation, but to have one spot where much more radiation gets through because of atmospheric changes (similar to the fears about ozone depletion.) Specifically, I need enough radiation to cause severe damage to even hardened electronics exposed to sunlight for less than a day, and substantially raise the cancer risk for even sheltered organic life. And no, just having it in a tidally-locked orbit around a white dwarf or neutron star won't do. I need less than a third of the surface to receive this intense radiation.

There are three major components to this question:

1. A star that produces significant amounts of UV and x-ray radiation: The simplest way of doing this would be to make the star massive, since large and bright stars tend to have high-energy emissions. Unfortunately, larger stars die much sooner, and I need a system that can survive long enough to produce mature planets and be able to keep them for at least another 500 million years. An x-ray binary is probably my best option for this, though the supernova necessary to create the neutron star it requires might hurt the chances of the system's planets managing to hold onto enough atmosphere to make this work.

2. An atmosphere that can block most of this radiation: Ozone is great at blocking UV rays, and thick atmospheres excel at blocking intense radiation. Smog and other physical blockers reduce a wide variety of radiation. What other naturally-occurring chemicals/compounds/substances would block radiation? The more efficient the better.

3. An area of the atmosphere that blocks much less radiation than the rest: This is where it starts to get tricky. CFCs can break down ozone, but I'm not sure about the rest of it. The best candidates are ways to either break down the blocking agents or else move them out of the way. Of course, this needs to be kept local so that it doesn't propagate through the entire atmosphere. A couple of possibilities:

Or maybe I'm on the complete wrong track, and there's a way to make only part of a planet receive intense radiation despite having a uniform atmosphere.

A follow-up to this question. The basic premise is to make a planet (or moon) that seems completely uninhabitable from a certain point on its surface but is much more hospitable (though not necessarily friendly to organic life) beyond that point. Additional relevant details copied from the original:

There can't be anything that would make mining or research seem to be worth the risk. Obvious signs of abundant rare elements, scientific anomalies, alien civilization, or native life would all be too interesting. I want anyone who discovers that the planet is inhabited to wonder why the inhabitants bothered. Planets with really unusual dangers are cool, but I want explorers to be saying "Wow, this place sucks!" rather than "Wow, I wonder what's up with this place!"

Please note: Any answer that would make scientists seriously question whether the conditions on this planet arose naturally and abiotically is not a good fit for this question.

You could have a concoction of uniquely badass magnetosphere, oddly powerful solar wind and highly elevated (perhaps due to an icy plate floating on a deep ocean) northern pole.

Our own magnetosphere channels charged particles flung from the sun, the stars, and other cosmic entities along it's field lines to the northern (and some to the southern, lets not get chargeist) poles. There they interact with the atmosphere and cause pretty pretty lights!

They also ionise the atmosphere, and the channelling effect causes higher levels of cosmic radiation at the poles. The higher up you are, the more likely you are to be exposed to higher doses. If your pole is high enough then you can put yourself in a worrying situation. Bump up the magnetosphere and the solar wind and you'll have a planet with planetwide aurora (aurorae?) and particularly vicious radiation conditions at the North Pole.

Or, if your atmosphere isn't too thick, just a stream of cosmic plasma bombarding the North Pole. Ho Ho Ho.

There are actually a couple ways to do this even with a star & earth similar to ours such as:

Thos are just the couple I came up with quickly. There are probably other ways too, but these can both exist in worlds very similar to earth (and plenty of dissimilar worlds too).

Start with pulsar planet like the ones that formed around the pulsar Lich, but a little further out and tidally locked so that it becomes something like a hot eyeball world: 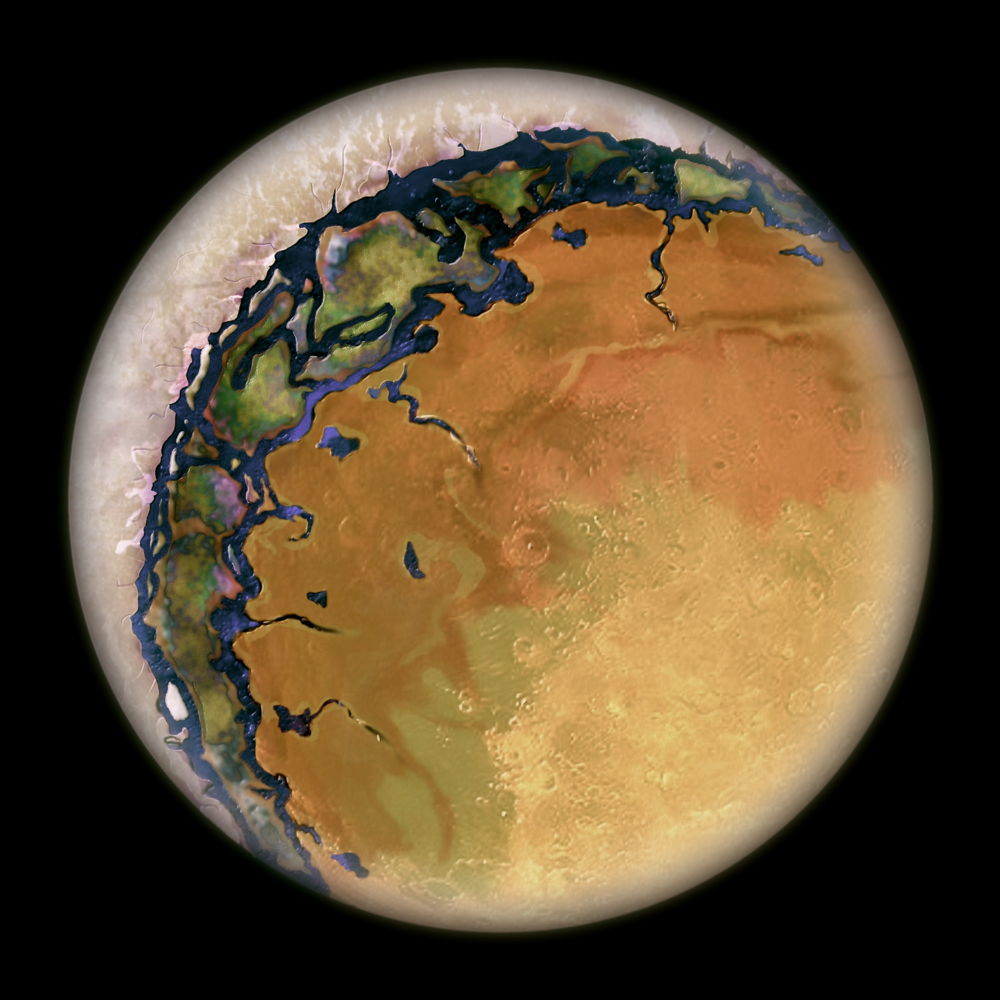 Set the planet at just the right distance from a pulsar, which are very hot, but not very bright, and most of their energy is in the form of radiation.

Because of being tidally locked the back side would be cold, and the front would be blasted by radiation, but around the terminator would be a band of clouds and storms that would reflect some of radiation. Air from the front would be heated and pour around the planet toward the the cold back side, where it would cool down and rush back around to the front side bringing moisture with it and causing the storms.

The back side would be colder, but because of the circulation not freeze completely.

As to how life got there in the first place in only 1 billion years, it was seeded by the travelers that left the gates.

How about a ring system, like Saturn, where the rings keep the sunlight filtered except in a gap? This answer is inspired by this question: By what mechanism could a planet be locked into permanent solar eclipse? This answer explores the idea of a tidally-locked binary pair of planets such that one keeps the other always in shadow. If the inner one is more dense, it would be smaller, allowing it to remain on the inside of the orbit and only allow full sunlight in a ring onto the larger planet. There is some debate in the answer about the orbital mechanics. Seems like it might be worth trying to set up in a simulator.

Up from the below.

UV radiation is tricky, but you can have your world get lots of ionizing radiation in the form of X-rays and gamma rays by having your crust enriched in radioactive elements that emit this type of radiation.

The earth contains elements which emit ionizing radiation; the radioactive decay of these are responsible for heating the deep earth and generating radon gas in the crust. You could have a lot of radioactive elements in one area of your world, including some with shorter half-lives like americium. You could have these elements arrive on your world in meteors from some distant supernova - a few of these breaking up on entry would enrich parts of your world with radioactive isotopes while sparing the rest.

Not the answer you're looking for? Browse other questions tagged science-based planets moons atmosphere .

26
Making a Planet Seem Uninhabitable
16
By what mechanism could a planet be locked into permanent solar eclipse?

12
Earth-like planet orbiting neutron star?
10
No sunlight, just high-energy radiation?
26
Making a Planet Seem Uninhabitable
3
Feasible star + planet + moon combo? Did I miss anything that makes this system wildly unstable or otherwise impossible?
7
Colonies in giant caves
5
Is a planetary 'temperature inversion' plausible?
11
What light would my cloudy planet receive from a red dwarf star?
7
What gas can replace ozone as a UV filter in a planet's atmosphere?
22
Plausible reason not to notice a planet