What is the color of Venusian sky 50km from surface

It is said that around 50km above the surface of Venus is the most earth like environment on the whole solar system (source here),

At an altitude of 50 kilometres (31 mi) above Venerian surface, the environment is the most Earth-like in the Solar System – a pressure of approximately 1000 hPa and temperatures in the 0 to 50 °C (273 to 323 K; 32 to 122 °F) range. Protection against cosmic radiation would be provided by the atmosphere above, with shielding mass equivalent to Earth's.

Therefore it is possible to build floating aerostat cities on the venusian cloud tops. Given sufficient time and technology humanity would be no doubt colonizing the venusian atmosphere in floating cities.

But only one problem remains, I can't find any good explanation or description of scientifically accurate depiction of how the sky looks like from a floating platform on Venus, 50 km from the surface.

There's an artist depiction of Venusian cloud tops on Wikipedia: 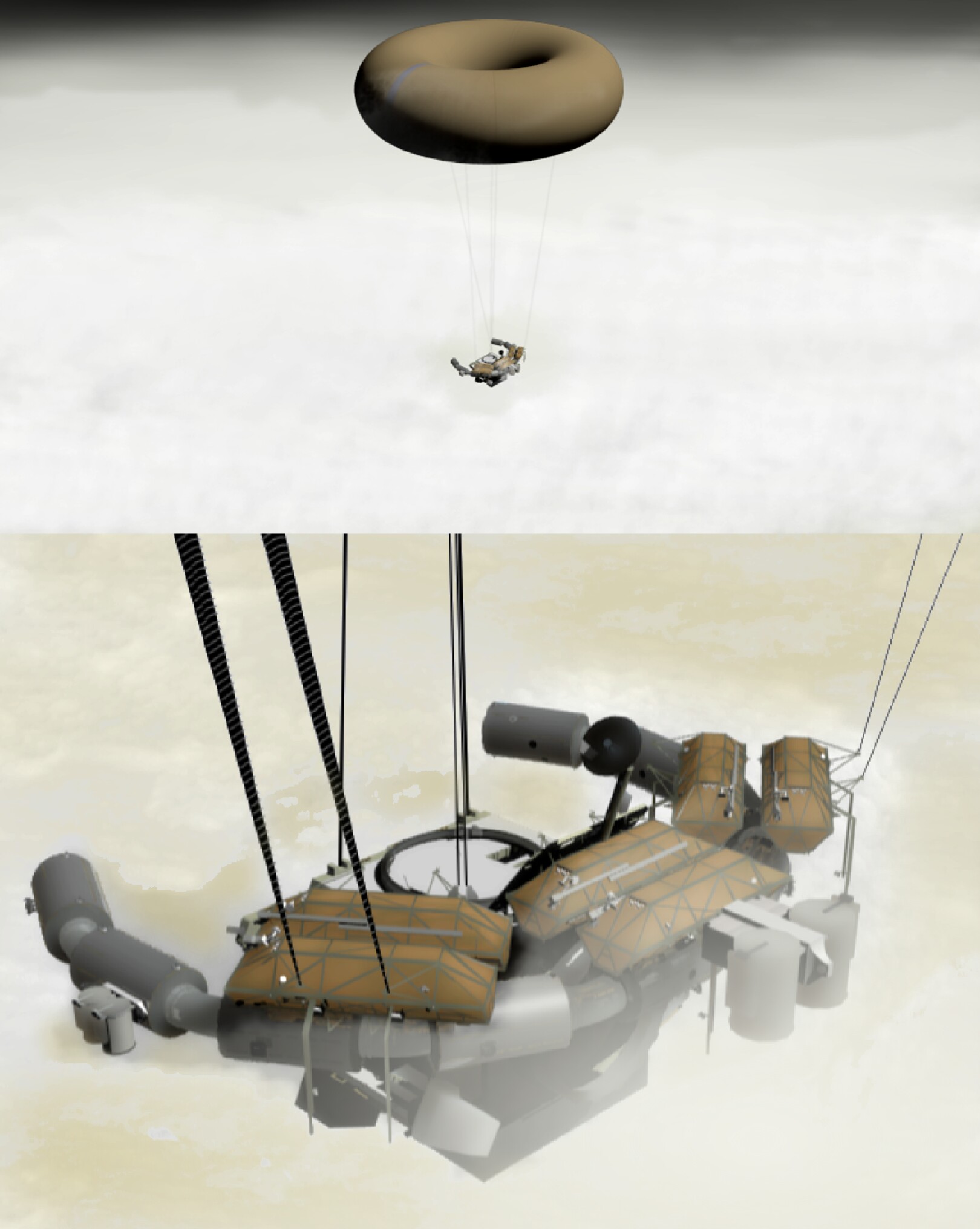 Both depicting different coloration of sky and clouds of Venus.

The first shows orange-ish nuance of color (I think) and the second proposes Earth like coloration of sky and clouds.

While both looks beautiful enough, I am wondering on accurate depiction of sky and clouds coloration on Venus.

Therefore the question would be: What is the accurate depiction of how sky and clouds coloration 50-60 kilometers above venusian ground would be like as seen from a floating aerostat platform?

Someone has asked a similar questions here, but I have to make it clear that while the question is about the same general subject (venusian aerostat), I am asking about the accurate coloration of Venusian atmosphere 50-60km from surface, not about whether or not it is feasible.

Common misconception is that Venus is a dirty yellow; this partly comes from false-colour images that are common used but also the association of Venus' sulfur content and how elemental sulfur looks. Venus is virtually pure white in true colour.

At 50km, an aerostat would be passing through cloudtops, that would be bright white, with hints of yellow at times due to the impurities that might be in the clouds at the time.

But in reality, the images displayed for the concepts are accurate.

Earth's sky is blue due to Rayleigh scattering. Rayleigh scattering redirects at an angle a percentage of incident light through a gas. The percentage of light reflected is proportion to $1/\lambda^4$, where lambda is the wavelength. That is, the shorter the wavelength, the more light is reflected. Violet light is most reflected, percentage-wise, but the purple section of the visible spectrum is small. So Blue light is the next most reflected, and since that portion of the visible spectrum is large, the sky is blue. Here is a graph from the above Wikipedia article of percent scattering vs. wavelength: 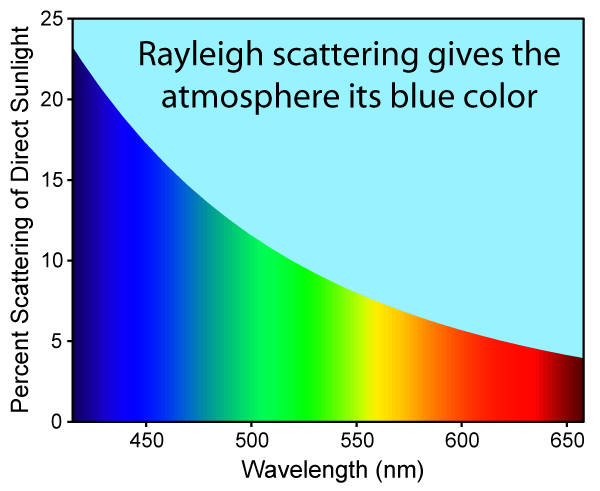 According to Shardanand and Prasad Rao, 1977, the Rayleigh scattering cross section for Carbon Dioxide is 3.5 times higher than that of Oxygen or Nitrogen (Table 1). Because the $1/\lambda^4$ term in the scattering cross-section is the same for all gasses (Eqn 12), the CO$_2$ scattering curve will have the same shape as the Oxygen-Nitrogen curve on Earth. Thus if we assume a similar molar density of gas particles, the sky of Venus would be even blue-er than our own.

I can't get any density measurements from 50km in Venus' sky, so I can't estimate molar density for calculation. But in the absence of any other color, I would expect the sky in Venus to be blue.

Not the answer you're looking for? Browse other questions tagged science-based planets atmosphere .

26
What is the feasibility of a floating city on Venus?
12
How to predict the color of this sky?
4
What conditions would make a permanent turquoise sky?

5
Surviving the atmosphere of Venus
8
How can a world have permanent cloud cover?
21
How dense of an atmosphere do I need to "float" an ocean of liquid at 1000 ft elevation?
4
How does composition change if you extend an Earthlike atmosphere 50km below sea level?
0
Feasibility of a gas giant made of oxygen and water vapor?
5
Can a perpetually darkening atmosphere exist and yet still allow life to evolve?
4
Is a dense CO2 atmosphere compatible with an ocean
4
What would the atmosphere of the Archaean Earth look like? (Before massive oxygenation)