Apparently, this was investigated by NASA in the early 2000s in what became known as The Caves of Mars Project. Its goal was to find possible places for humans to live over extended periods of time, safe from the weather and radiation.

Cushing (2010) analyzed and published images of possible cave entrances based on the Odyssey and Mars Reconnaissance Orbiter missions.

Here are some possible entrances by a lava flow near Arsia Mons: 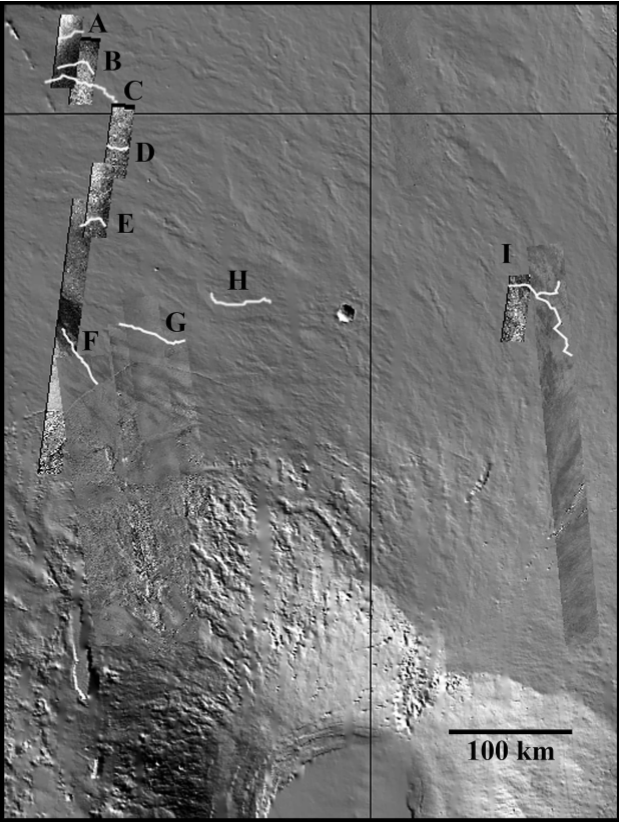 Just recently, a huge amount of frozen water was discovered below Mars' surface in the Utopia Planitia region--enough to fill Lake Superior, meaning 2,903 cubic miles. While this does not directly indicate any caves, it does point out how much of Mars' geology we have yet to explore. So, I'd bet the Caves of Mars project, as described by HDE 226868, could reveal more caves over time, if they exist.

One likelihood, though, is that this ice will eventually be mined. The ice deposit in Utopia Planitia ranges in thickness from about 260 feet (80 meters) to about 560 feet (170 meters), but is only covered by 3 to 33 feet of surface soil.

If this ice were mined, the surface might be deemed necessary to leave intact, necessitating reinforcing the roof of the huge hole (approximately 2,900 square miles!) where the ice once was. In addition, in places where the ice is over 500 feet thick, sequential tiers or floors might be built as each ~20 foot deep layer was mined away. This could would give rise to enormous complexes of multiple-story man-made caves. Reinforcing of the roof of the mining area would be absolutely necessary if other deposits significantly deeper below the surface were mined.

So, these areas are likely future locations of man-made caves.

Caves are likely rare at best on Mars

HDE226868 pointed to lava tubes as potential sources of caves on Mars, and to evidence for them. I do not dispute this at all, but when you picture a cave on earth, the chances are you are picturing a limestone cave, not a lava tube. Limestone caves are common because limestone is very slightly soluble in water, and the action of water will slowly dissolve limestone veins out of larger rock formations over hundreds of thousands of years.

While liquid water is not common on Mars, limestone is not present at all on Mars. It is not formed rarely formed by geological processes and usually by biological ones. Calcium carbonate can be formed by evaporation of a salty ocean, and it appears that it was formed this way on Mars after the oceans of the distant past dried up. However, concentrations of calcium carbonate large enough to make limestone formations are made from the crushed shells of marine invertebrates; if organic processes are not involved, other chemicals will be mixed in.

Lava tubes are also rare on Mars, because of its relative lack of volcanic activity. I am not sure what the latest scientific consensus is, but my impression is that volcanic activity on Mars as basically ceased over the last 500 million years. That is a long time, even on a geological scale, and plenty of time for erosion to collapse caves, even with the rare water and earthquakes of Mars.

In conclusion, there is evidence that there are caves on Mars, but I do not think that there are very many at all, because the processes by which form caves on Earth are uncommon on Mars. However, the lava tubes that may exist throughout the the Tharsis-Olympus region might be what you are looking for.

Not the answer you're looking for? Browse other questions tagged space hard-science geography geology mars .

16
A blue flamestorm blasting through a system of big yellow caves?

5
Can I trigger an "ancient device" to start the process of terraforming Mars?
9
How could we create a pressure bubble on Mars without walls?
28
What would the effect be on Earth if Mars disappeared?
14
How could a planet have zero surface caves?
9
How thick should the roof of a large cave be to safely build a city on top of it?
7
What would happen if a volcanic cave was connected by a tunnel to a frozen cave?
1
How could I have massive subterannean space on my world?
16
A blue flamestorm blasting through a system of big yellow caves?
1
Determining maximum cave depth
3
How would colonists on Mars effectively move about with the lower gravity?