Could a sedentary civilization prosper without agriculture?

In my world there are this people that live in a great jungle. They are as advanced as the other civilizations of the world (late medieval standards) with a complex society, work specialization, strong army, large cities, rich culture... But they do things in a very different way than the others, for example they don't use metal at all, instead their weapons are crafted from hardened wood, sharpened stones and animal bones and their armor is made of lamellar paper. But anyway about the question, they never developed agriculture because there is already a lot of food in the jungle. Could they get what they need to develop villages and even great cities only by gathering and hunting? If so, what kind of new techniques and technologies (corresponding to field crop rotation, plows and hoes for example) do you think they would develop? Thank you all in advance and this is my first question here so please tell me if I did anything wrong.

First, let's address why the civilization cannot be maintained through traditional hunter-gathering.

As @kingledion mentioned, there is no need to develop agriculture; we have observed cultures that do fine without it and rely on the land instead. So it's possible! That's a start. However, his answer describes small, thinly spread societies, and not cities. If you want densely packed populations, you cannot harvest the same, adjacent land forever; biodiversity will lower, and you will eventually run out of food. Therefore, you cannot do it through the conventional means as he implies.

So the question is now "how does a stationary settlement manage the nearby resources to continue using the same land?"

Magic
You've described the use of magic to replace metal with durable wood; I don't see this why this magic couldn't be used to overpopulate the area with wildlife, draw in species from afar, or transmute existing matter into food. If magic can scale to the point where metal is completely replaceable, I'm sure food can be logistically feasible in this way.

Land Rotation
I wish I could provide the source for this, but I've lost it. Some Native American populations rotate around a certain point throughout the year, with a quadrant used for hunting and gathering in each season; this allows nature to replenish harvested regions before they need to be used again. Instead of moving temporary settlements into each quadrant, why not put your jungle city in the center - and restrict the legal hunting/harvest areas, while cycling yearly?

Controlled Harvests
An extension of the way hunting seasons work in real life, this scenario imposes laws that determine what can be gathered throughout the year. Perhaps there are "seasons" for certain berries and "seasons" for animals. This will allow biodiversity to be maintained; overharvesting during each season must compensate for the limited food supplies resulting.

Trade
An interesting approach. Perhaps the land the city/cities is/are in is inconvenient for agriculture - mountainous, marshy, or otherwise hard to work with. Instead of farming crops and animals, your natives may be able to gather a local resource - timber, gemstones, magic elephant tusks, you decide - and trade with visiting societies for food.

American Indians in the Pacific Northwest and California generally did not make a transition from hunter-gatherer to agriculturalists, even though they were in trading contact with groups from the rest of North America, and almost all of those groups were agriculturalists.

The Pacific-Northwest Indians in particular were able to reach population densities similar to the agriculturalists of the Great Plains due to the richness of their environment. There is lots of available seafood, and in particular the salmon runs each year provide a huge calorie windfall. Incidentally, this is the reason that there are so many and so large grizzly bears in the same area. What is good for the bears is good for the people too.

However, this has more to do with lack of crop options than it does with the greatness of the salmon fishing. Corn was by far the dominant crop in temperate North America; the only other competitive grain was Indian rice from the Upper Mississippi and Great Lakes. Neither crop is appropriate for cultivation on the West coast. Indian rice depends on flooded marshland, and corn needs a warm wet growing season. While the eastern half of North America has warm wet summers, the Pacific Northwest has dry summer, as you can see from this graph of Seattle's rainfall (source: en.climate-data.org) 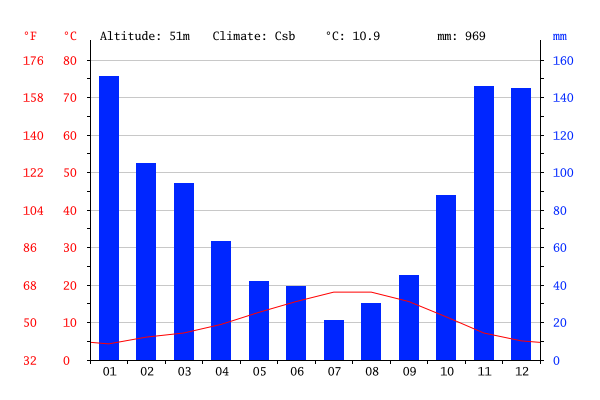 With a staple grain unavailable; there wasn't much incentive to shift to agriculture for the Northwest Indians. Other options like the potato from South American hadn't transfered that far north yet, and there were essentially no livestock options for a pastoral lifestyle (the llama, too, did not transfer that far north in pre-Columbian times). So the Indians of the Northwest had no better options than the fish that ran freely in their streams.

Conclusion: A sedentary civilization could prosper in a good climate, with an ample natural food source. There are real-world examples of such peoples developing religion and monuments (totem poles) and medium-sized villages and what have you. But it would primarily be because there wasn't a better agricultural option than the natural resources available to them. To develop further, these people would need little intrusion from outside agriculturalists, and a well explained source of natural bounty; like a giant swampland full of wild rice, lots of fish, etc.

Do eskimos have agriculture? It's certainly possible for a culture to live as fishermen and not grow crops to a large extent (just a few herbs and vegetables).

Yes, you can have an advanced civilization without having agriculture. If you have neighbours who farm and have industrial infrastructure and you can get all kinds of raw material and tools from them. Either by trading something valuable they want but don't have, or by taking it by force.

What about a cattle-like people that simply graze off whatever already grows? Maybe they can eat trees whole and their stomach is sort of a wood-burning stove?

Perhaps they feed from molecules or even organisms in the air through osmosis?

What if their stomach is more of an engine that can be fueled by power cells of some kind? (think steampunk) Then I guess power cell manufacturing would end up being a kind of agriculture for them.

After all, agriculture itself (plants) make use of sunlight. What would prevent a race of beings from having green skin that does the same?

If the forest they occupy is as vast as you say, I see no reason they wouldn't be the dominant life form (over any animals or competitors for food), and thus, they would have no trouble taking all the naturally growing fruit they could possibly eat. Maybe there are different kinds of trees so that fruit grows year round without any tending to?

Maybe the race only needs water to live - not solid food. Then any kind of rain, even seasonal, would be enough to sustain them. They would obviously be able to store it up for any dry spells if they had to, or you could have the planet/world provide continual rainfall.

Vampires don't require solid food. They obtain their sustenance through obvious other means.

No food at all

I thought I'd also point out that having a race of beings that require no sustenance at all could be perfectly acceptable in the realm of fiction. This question (and perhaps the food tag) seems to lean towards an inbuilt assumption that the species does require food to live. If they didn't, agriculture would be completely unnecessary. There are any number of other mechanisms that could explain their continued existence.

Looking at the problem logically, you need a few things to support a city. You need an individual worker to be able to produce more food than s/he needs to feed him/herself, and you need to be able to preserve and transport that food.

It's true that you can't support a large city on the produce of hunting & gathering from the adjacent land - defining adjacent as what city people could walk to, produce food, and return. But you can't use agriculture to support large cities on the produce of adjacent land, either. The larger the town, the further the distance you have to transport food. For a fairly well-documented historical example, Rome depended on grain & other foodstuffs from all around the Mediterranean.

Terry Pratchett said it far better than I could: "Every day, forty thousand eggs were laid for the city. Every day, hundreds, thousands of carts and boats and barges converged on the city with fish and honey and oysters and olives and eels and lobsters. And then think of the horses dragging this stuff, and the windmills … and the wool coming in, too, every day, the cloth, the tobacco, the spices, the ore, the timber, the cheese, the coal, the fat, the tallow, the hay EVERY DAMN DAY…"

"Against the dark screen of night, Vimes had a vision of Ankh-Morpork. It wasn’t a city, it was a process, a weight on the world that distorted the land for hundreds of miles around. People who’d never see it in their whole life nevertheless spent that life working for it. Thousands and thousands of green acres were part of it, forests were part of it. It drew in and consumed…"

So that's what you need to get a city (or a society) that's not based on our ideas of agriculture. People have to be able to harvest more food than they need, preserve that food somehow, and transport it to the towns & cities. Perhaps a lot of the food is fruits & nuts from jungle trees that are too slow-growing to be amenable to conventional agriculture - certainly not the "plant in the spring, harvest in the fall" kind of farming. E.g. olive trees, which take a decade or more from planting to producing fruit, but can then go on being productive for centuries.

Yes provided the area they live is very productive naturally. see the Native Americans that used to engage in potlatch. The pacific northwest natives had fairly large societies and engaged in huge ritualized waste of resources. normally such large populations and heavy use of resources would require either agriculture or herding. Yet they were hunter gathers, the area was so naturally productive the normal rules went out the window. Researching them can give you information on how they collected the resources and how it affected their culture.

Not the answer you're looking for? Browse other questions tagged economy food agriculture .

17
Development of society with random encounters
7
Could "soylent" or "body fuel" be mass produced cheaply without the reliance on agriculture?
6
How do you achieve the agricultural revolution without agriculture?
29
Deriving price from a framework of production in a medieval economy (ie "Can I have a 1,500 gold meat pie, please!")
3
Agricultural population reality check
0
Dungeon-fed civilization - what are the consequences?
2
Pre-Spaceflight alien agriculture part I: herbivores and grazers
5
What sort of weapons manufacturing could be supported by a post-apocalyptic world?