Life from a dead space whale

Let's take our regular "Great Blue Star Whale", with a mass of about 10 000 tons. That poor, poor whale is reaching the end of its life for whatever reasons. (Damn you! Space whale hunters!). It will interestingly crash into a planet. That planet is not too dangerous (no endless volcanoes or corrosive sand) but it is uninhabited.

My question regards the possibility for life to evolve and expand from the corpse of the space whale. Would it be possible / realistic for something like this to happen?

May life even grow inside the corpse without ever needing to go out ?

Crash isn't the word when a star whale hits a planet, the word is splash.

A spider'll not even notice a drop like this, a mouse'd walk away, a horse'd break every bone in his body and a helephant would splash - Wee Mad Arthur (Terry Pratchett) - Feet of Clay

You're going to end up with bits of whale spread over quite a bit of the local scenery. Digestive bacteria would still be going strong but the whale as a whole is very very dead.

Life could well evolve on the planet as a result of this, how easily is down to the diet of the whale and how well the surviving bacteria can adapt to available food sources on the planet. If there happens to be a type of rock that the whales could break down that's plentiful on this world then you're home free.

When it comes to life going outside the whale... after that landing it's most definitely outside. There's not a lot of inside left.

First it needs to be said...

And wow! What's this thing suddenly coming toward me very fast? Very, very fast. So big and flat and wide it needs a big wide-sounding word like ...o ...ou ...ound ...round ...ro ...ground! That's it: ground! I wonder if it'll be friends with me.

But, in all seriousness, the answer to your question is:

Yes, a creature like that can very well kickstart life on an otherwise lifeless planet

The animal cells of the creature itself are unfortunately doomed to die, and rather soon(*). However, it may be carrying passengers. Any plant life or bacteria that uses photosynthesis for its metabolism may catch on and thrive.

The most obvious and interesting among these (if we assume an Earth-like origin for the creature and an Earth-like destination) are probably Cyanobacteria. Assuming your poor creature splashes down near free water, then this kind of bacteria is not only likely to thrive, but to have other interresting effects on the planet, such as oxygenation of the atmosphere.

As for the bowl of petunias... 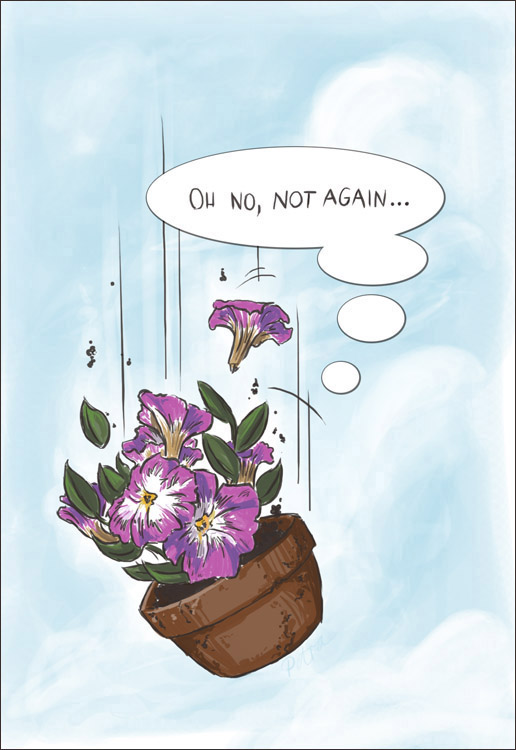 ...well same thing really. If it is carrying any plant life that can survive without being dependent on nutrients from pre-existing life, then plant life can — quite literally — take root.

It must be noted though that with evolution being the extraordinarilly slow mechanism that it is, it will take a few billion years until there is widely diversified life of the sort that we think of.

(*) Then again... a space whale that can life in the extremely harsh conditions of outer space?! Seems like quite tough animal cells if you asked me. And there are some — indeed — immortal cell lines in Earth as well. Maybe, just maybe...

Seems Plausible IF It's a Sperm Space Whale: cue "Panspermwhalia"

If the average earthly whale is anything like the average space whale, then it seems very likely some of the intestinal contents will still be alive and some can continue to thrive:

A body’s intestines are filled with micro-organisms in their millions, and these do not die even after the person dies. These micro-organisms start to break down the dead intestine cells. Others like the bacteria known as coliforms and clostridia start invading other body parts.

(Source: How Long Does It Take for a Body to Decompose?)

In that environment, evolution could easily continue via mutation, natural selection, etc.

Obviously, though, the chances of inseminating new life on a planet are higher if a thoroughly potent source is involved. Hence, Sperm Space Whales are most likely better candidates for whale induced panspermia (but I do not speak from experience.)

As far as life springing forth from the corpse of the whale, I'm not quite certain that could happen. However, the whale could be the catalyst to awaken bacterium that have been dormant for any length of time on the new planet. The whale's corpse would provide the "nutrient solution" that the bacterium need to revive and grow.

Usually questions about space-whales are a steaming pile of pseudoscientific twaddle, however, this question confines itself to something sensible. The OP may congratulate himself.

For the sake of scientific sanity, it is assumed that space-whales are otherwise whale-like creatures created by extremely advanced alien technological civilizations. Basically they are cyborg marine mammals equipped with environmental protection systems to enable them to survive in space, and a propulsion system for easy travel around the galaxy.

The core question is essentially whether dying or dead whales "beaching" themselves on alien planets can be a source of life dissemination. Basically, panspermia by dead space-whales. So the question is would this work?

Could life on a planet be initiated by the cells and tissues from a dead whale? The simple answer is no. Possibly the DNA from those cells might form the precursors to life on the planet, but this should be regarded as extremely improbable. So no.

What is more probable to be a source of life on a planet is the microbiota carried by the space-whale's body. If microbes could become established in the planet's environment they could colonize the planet. However, there are caveats about the fact that these micro-organisms will be well adapted to the environment and ecology of the space-whale's body this will make it improbable, but not impossible, for dead space-whales to be the vectors for spreading life to otherwise lifeless planets.

May life even grow inside the corpse without ever needing to go out?

Sadly, no, even ten thousand ton dead space-whales don't last forever. Their tissues will either run out or break down to the point where the viable existence for any organisms living inside a dead space-whale will run out. Eventually the outside environment will break in, and the space-whale won't be anymore. So, for a short time, yes, but not in the long run.

Not the answer you're looking for? Browse other questions tagged biology xenobiology origin-of-life or ask your own question.

5
Life under the surface of Ganymede
9
What would be the consequences of a world that has only one dominant species of non-oceanic animal life?
5
Origin of life on a waterworld
3
World with low amount of oxygen like Everest dead zone: can life be complex?