How good would ice weapons be?

2700: To avoid apocalypse by global warming, a powerful nation (probably America) stops the Gulf Stream. This puts Europe into an ice age, and averts the impeding disaster. However, Europe was not ready, and when World War III comes (2900-3000) they have already been reduced to a hunter-gatherer society (albeit one with higher technology weapons than your average pre- or post- Rome tribe).

After the war, a clever person named Joal comes up with a way of making ice very sharp, and so usable for spears/knifes/axes. Meanwhile, traders have noticed that getting good flint/steel/iron/other materials for weapons is rather hard on the frozen continent, that they might pay quite a lot for a good knife/spear/etc. .

So how rich should Joal expect to get, as ice is the only readily available material, and the traders are overcharging?

EDIT: After the War, all tech is unusable. See this post for some reasons.

Solid ice weapons would be useless. Ice is plenty sharp, but it's also fragile. You can see this for yourself by grabbing an ice cube and throwing it on the ground; it shatters easily.

Pykrete has different properties than solid ice, and it is feasible for a sword. In fact, this page (How to Make a Sword Out of Ice and Toilet Paper) has a video of a real sword made of pykrete: 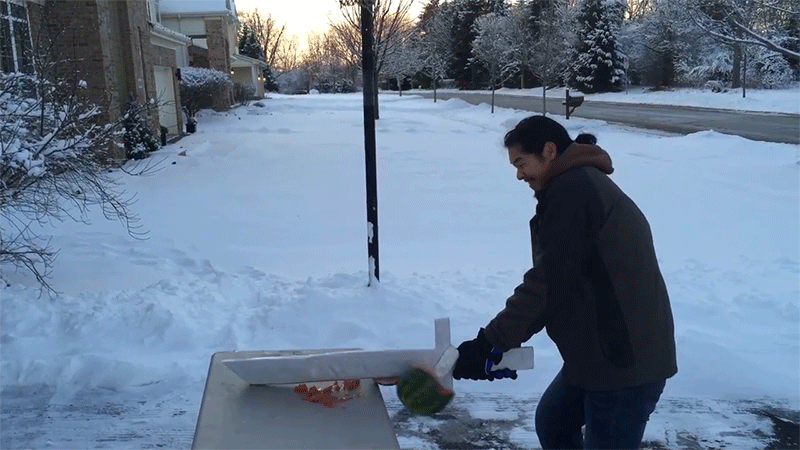 The following properties are from Proposals and inventions of Mr Geoffrey Pyke; gravity propelled ball bomb, pykrete and power driven rivers (1943), via Wikipedia:

You still need to keep it frozen, but Pykrete also has a slower melting rate than ice. It's a smart idea to insulate the handle anyway.

All of these qualities vary with the type of wood pulp and water used, but it will always perform better than solid ice.

Ice is not hard enough to be a weapon

Ice has a Mohs hardness of 1.5, like tin. Aluminum is 2.5, copper is 3, iron is 4, and steel is 4.5. Tin isn't useful as a working metal; it was used in jewelry and alloying. Ice isn't hard enough to do anything you want it to do.

An ice age isn't below zero all year

If it were below zero all year round, then there would be no liquid water, and no plant growth. With no plants there would be no farming, or wild animals, and humans couldn't live there. Therefore, I conclude that the ice weapons will melt at some point of the year, reducing their value.

Given that you just said that there exists an America potent enough to re-direct the Gulf Stream, I would assume that the entire world isn't a frozen ice mass. Therefore, there are parts of the world that are not frozen, and possibly still at an advanced civilization level. In that case, why wouldn't Americans trade steel for whatever it is the Europeans have to trade? Steel is cheap, and much better than ice, and one plant probably makes more of the stuff in a day than the entire world made before 1500 AD.

Traders from the advanced world would be there to trade much better weapon materials than ice. Joal won't have any customers.

Joal, unless he is a really good con-artist, makes $0 or shells or whatever.

The biggest hurdle that I see here is: people need to keep warm to survive.

Your ice weapons would have to be stored outside of any place that would keep a human alive. So it would melt or be stolen, or be useless when someone comes into your warm place to kill you. People like to keep weapons on them. They like to be able to come into a tavern with a warm fire and still be able to defend themselves should the need arise. People like to be inside and warm. They aren't all going to be in sleeping bags near a fire in the open, if that's what you picture. We were past that even before Medieval times.

Second biggest: as other posters have pointed out ice is not hard enough to be effective, no matter how cold it is. And, of course, an ice age does not mean things are frozen all the time and never underestimate the power of trade from other areas, as kingledion pointed out.

The work around? And this might not fit with the world you are building--Ice Magic. Basically a way to harden and make permanent ice to fashion into weapons. In no way would it be scientific, and it would, in fact have to be another substance, with a transmutation into the substance you would need.

The weapon could be "charged" by leaving it out in the cold or something like that.

Ice, yeah it can be pretty sharp,

but melts too at a high rate
and if that is not enough, pressure makes it melt faster.
It cannot be used in front line combat...but for assassins...its a jewel!! Special throwing knives which melts off after a while, delivering high amounts of dissolved poison(higher than you can get by applying on surfaces).

This source here discusses the fracture toughness of ice: https://www.igsoc.org/journal/22/86/igs_journal_vol22_issue086_pg135-143.pdf

Summary:
1. Ice is brittle.
2. It gets more brittle as the temperature increases, even when it's still below the freezing point.
3. Increasing the loading rate of the applied force (hitting it with a sharp blow vs. steady pressure) makes it fracture more easily.

All of that adds up to a really bad melee weapon. Ice could pierce skin, but you're going to crack it when you hit something hard, like bones or steel blades.

Not the answer you're looking for? Browse other questions tagged weapons post-apocalypse ice or ask your own question.

1
Would it be possible to remove all the technology from the universe in one hundred years?

15
How to justify the absence of weapons
6
How Does Steel React to Ice?
1
How long would current weapons last?
6
What could you mine from a city squashed by an ice sheet - in a new ice age?
0
Frozen inside an ice cube
1
If ice was denser than water what plants could survive?
4
Ice Dome Greenhouse
8
Ice Construct Weapons
2
Floating Ice Homes