Why would an antigravity abyss exist in a deep cavern?

[Here's some writing. It will explain some aspects of the abyss in a way I can't otherwise.]

"It's beautiful", uttered Ivan, in a rare moment of appreciation. "Rocks and platforms and chunks of land all floating in an endless abyss of the blackest black. This one's different from the others. If we jumped off this ledge, we wouldn't fall too far."

The lithomancer, Tumor, glances up.

"The air here is breathable, but so thick you can almost swim in it. Seeing as how you're a pyromancer, Ivan, you could probably propel yourself regardless; however, Rhys and I will need to take advantage of its odd thickness."

Rhys jumps into the abyss. She travels a very short distance before halting in the air. She makes a breaststroke motion and moves forward a bit.

"It's amazing, I'm completely weightless. Come on in, the chasm's fine."

The other two jump into the rift and begin trekking across.

The abyss is deep underground but not deep enough to reach the planet's (presumably hollow were this the case) core. A waterfall on a distant floating mountain evaporates into the abyss, filling it with clouds. Occasionally, movement is seen. Never is wind felt, however. Perhaps they're not alone?

So, how can I make this theoretical abyss possible?

Some details and elaborations about the chasm from the story:

There are two major questions:

Answers are preferred to have a scientific basis, but given the high fantasy setting and frank implausibility, magic is also acceptable - especially if it has a good excuse (err, "lore reason") to be so.

There are lots of reasons for giant caverns

If you want lots of bits of land mass deposited in this cave, the reason could be as simple as a partial cave-in depositing thousands (millions?) of tons of rock into the cavern.

Super dense air is not possible

If the air is thick enough to prevent a bow from shooting 40 ft, then the air is probably deadly. Gases have a maximum density. To get them more dense than that, they would have to be a liquid. I don't know of any gas that is dense enough to stop an arrow like you said; and in any case, any gas significantly denser than air would displace oxygen and suffocate people.

Super dense air is only possible by magic.

Gravity is a property of matter and cannot be turned off

Gravity can be viewed as an impression in a mattress caused by a large object, like a planet. Anything on the mattress that is close enough will 'fall' into the depression caused by the the heavy object. The effects of gravity propagate equally in all three spatial dimensions. On the surface of a planet (that is a sphere) there is no way to have gravity in one place but less gravity in another.

A gravity-less zone on the surface of a spherical planet is only possible by magic.

I haven’t done the math on this (but (a) you specified science-based and not hard-science, and (b) you’re allowing magic):  The chasm lies under a deposit of some substance that’s many times denser than rock (neutonium?).  It exerts an upwards gravitational pull on the space immediately below it; with enough mass, it should be able to create a region where the gravitational field is zero (or infinitesimal).  Unfortunately(?), that also produces a higher than normal gravitational field on the surface above the deposit (i.e., above the abyss), but (handwave handwave …). 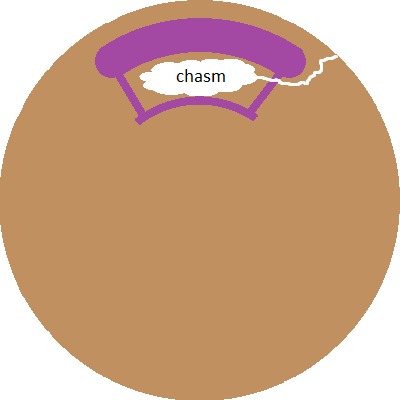 It’s hard to image such a structure occurring naturally, or being stable if it does exist.  It would probably collapse under its own weight.  So enter deus ex machina… it’s a constructed artefact (perhaps by a lost civilization, or by aliens).  (The builders might still live a mile lower.)  To support this notion (pun intended), I’ve added a second layer of the substance below the chasm, with pillars holding up the upper layer.

This doesn’t address the viscosity of the air.  But, if you stipulate that the chasm is accessed by tunnels from the ocean floor, you can argue that the atmospheric pressure is much higher than that at the surface, and that’s a start.

Anti-gravity isn't really what you are looking for. Gravitational nulling is. The precise alignment of a large moon, close enough and in coordination with a small enough sun and the right density planet could create a temporary lagrangian point in the chasm.

If actual anti-gravity is what you want, then it would be as hard to find with magic as it would be with science, I surmise, because if gravity is brokered by quanta with spin-2 bosons, then they are very hard to detect (we still haven't), and certainly very, very hard to manipulate. Interrupting the local brokering of space-time deformation by gravity might produce the effect of floating, but probably would have some pretty unpredictable results. Without gravity, time itself would speed up for the viewer caught in the null gravity field. That is straight up Relativity theory. Without gravity, the concept of NOW becomes even more questionable than it already is. NOW, as a concept, isn't covered in physics like you might think. It has special significance to us, but it doesn't exist in the formulas that physics uses to describe physical nature. The person caught in a zero gravity field would experience the same NOW with others in it, but the NOW of the outside world would be racing past.

There had been a suggestion of using an air-xenon gas mixture at high pressure to create an environment where buoyancy was sufficient for humans to "swim" in air. Such an environment would appear to lack gravity in the same way that being underwater seems to be weightless. It's not, but buoyancy gives lift.

The drawback to this air-xenon gas mixture was that it was an anaesthetic, so while humans could float in it they would be unconscious while doing so. While this isn't the recommended way to achieve the effect the OP wants it does provide a possible mechanism -- provided any possible adverse effects from a suitable gas mixture can be overcome.

If the abyss was actually inside a gigantic pressure chamber, then a suitable gas mixture could be contained there sufficient to create the buoyancy for humans to float as if they were weightless. This mechanism would need to be ramped up considerably more so to ensure that rocks could also float in abyssal air.

In a set-up of this sort, perhaps magic can operate in two ways. To overcome the anaesthetic properties of a high-pressure, high-density air-gas mixture. And to provide the containment needed for the pressure chamber to enclose the abyss.

If magic is used, there might be a simpler solution. Assume the magic works as a powerful viscosity amplifier. This will not only stop arrows in mid-flight, but enable people and rocks to float in its medium as everything would sink extremely slowly. Since this is magic. The viscosity will operate in such a way as to not prevent air flowing to any living creatures present in the abyss. Magic without safety procedures or mechanisms would be unnecessarily dangerous. It could also be designed to permit the movement of living creatures as if they were moving through a medium closer to normal air while preventing them from falling downwards.

A second simple magic solution would be a field of gravity neutralizing magic present in the abyss. Although this doesn't explain its arrow stopping properties. Perhaps that's a safety feature.

4
Preparing human colonists for a desert planet with a red giant
49
How would you know your floating island was losing altitude?
7
How far could you see the Andes from the Pacific on a flat Earth?
23
Can the Little Prince's planet actually exist in our universe?
5
Weather in a patchwork world?
0
How would the Weather be on a Double Planet System?
7
Does this model of atmosphere sounds plausible enough?
2
Could a habitable gas giant with an electropshere exist?