How to fire your engines for a near-future trip around the solar system?

I was pondering my answer to this question. I asked myself, "Why would I only do a 45-minute burn and then float for 3 months to get to Mars?". Then I answered, "Because you only have so much reaction mass; you can't let it rip for three months straight."

But is that really a good answer? Spaceships today just burn once then cruise, but they are also small. Will the space freighters of the future use the same principles?

Your power source is a Fission-Brayton cycle system. Fuel costs must be accounted for when calculating how long to burn. The engine is replaced as a single unit with all fuel included and costs 5000 bars of gold pressed platinum (bogl); its service life is 10,000 hours operating at full power (100 MWe). Only the full power hours during burn need be accounted for.

Your vessel will be manned. Each crewmember must be paid 1 bogl per year. The above configuration requires an engineer officer on watch at all times and thus takes a crew of 6. The longer the trip takes, the more you have to pay the crew.

Your cargo plus the weight of spacecraft is 10,000 tons, not including your lithium reaction mass.

Your goal is to fly from Earth to Mars (225 million km) starting in geostationary orbit of Earth.

What burn profile (firing engines at high or low impulse, for how long, in what sequence) will get you from Earth to Mars minimizing both the time and cost it takes to get there?

NOTE: This is a math problem. A correct answer will use the above assumptions and numbers. You can substitute your own systems and assumptions with good reasoning, but only systems that have a working prototype can be used, and assumptions about power output, etc. must be justified.

NOTE2: Time and cost cannot both be minimized at the same time. A correct answer will provide reasoning about how to prioritize each factor against the other.

NOTE3: Remember, you have to decelerate!

So, we have 3 costs - engine wear, fuel cost, crew payments - and we have to balance them to get out zeros, I suggest piracy on the way, lol.

To reach the Mars from GEO needs delta-v about 3 km/s( the exact number is not important).

Neither of both situations will take us more than 2 years, so, price of payment for the crew is less than 1% of total expenses, and will not affect the total cost in a significant way, therefore balance is between hour rates for engine work and hour rates of fuel expelled at that ISP and total time of acceleration.

hourly rate for the engine is 0.5 bogl/hour(minimal wage) + fuel bonus.

First order of approximation, we looking for a minimum of the red plot like this one: 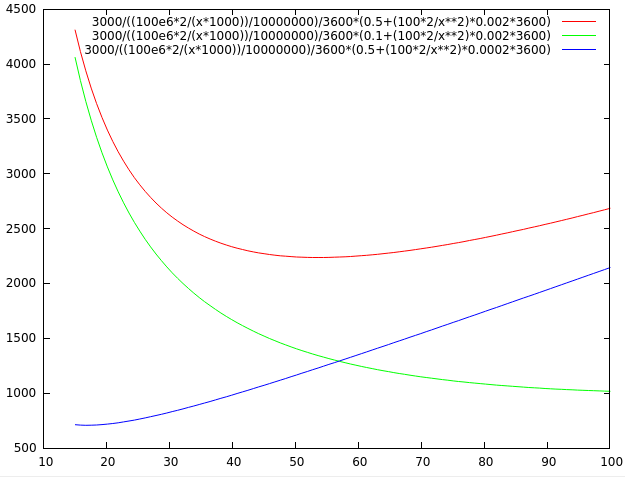 Green plot is how it looks like when engine time is cheap, blue if fuel is cheap.

It has to be noticed that it is just for the time needed to gain just(!) 3 km/s of delta-v needed for transfer from GEO to some orbit intersecting Mars orbit with following air-capture maneuver.

Price for the crew is not very important there, even if travel will take 100 years.

In fact, higher trust (and lower ISP) will be more optimal, as it rotates velocity vector less amount of time (those vector rotations are counter productive for delta-v gain, the situation will be better than for usual probes but I have to note that incorrectness).

Another problem is - it is not a continuous solution field, if we have pay fixed sum for the engine replacement, because if we spend let say 5001 hours of engine work on the way to Mars, and have to spend also 5001 hours on the way back we should replace engine completely - and time of engine work depend on orbits we use, so theoretical minimums may be no achievable on practice in some situations.

Also on the plots it is not accounted for a different initial mass of the craft, the difference is about 20% for low ISP and 3% for higher ISP - so, real optimum of ISP will be higher than red plot shows. The real value will be in-between of those two plots (red is same red as in plot above, purple-ish worsts case scenario): 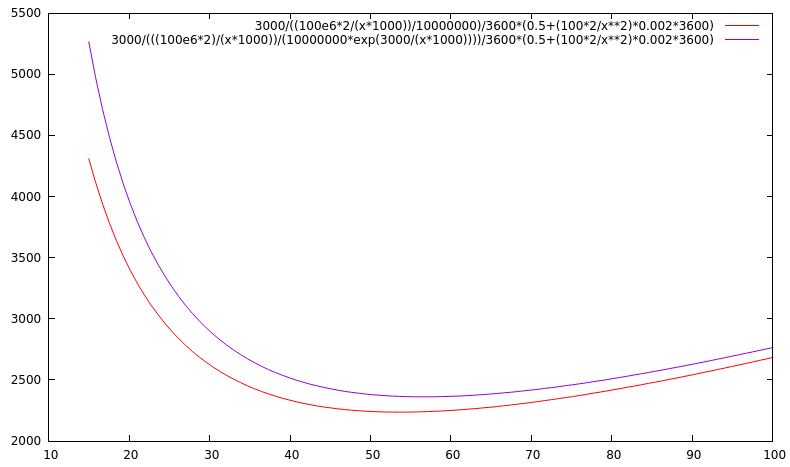 Formulas for plots are:

Not the answer you're looking for? Browse other questions tagged hard-science space-travel spaceships solar-system engineering .

60
Is space piracy orbitally practical?
11
What near-future propulsion system(s) could be employed by my spaceships?

21
Blind spot in the Solar System
60
Is space piracy orbitally practical?
8
How would an interstellar civilization construct a planetary shuttlecraft?
8
Problems When Disguising A Spaceship As An Airplane?
11
What near-future propulsion system(s) could be employed by my spaceships?
44
Electricity free spaceship
0
Can someone with a better understanding of physics review or correct my design of a hypothetical fusion reactor for space vessels?
8
Performance envelope characteristics for a hard-sci-fi torch-ship
5
Decent present or near future propulsion system for moving around in orbit or changing orbits
7
Estimating thrust and kg fuel for a generation ship's journey to Alpha Centauri