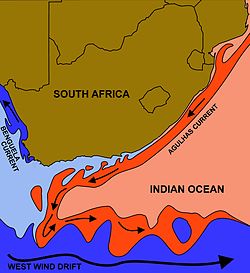 The Cape of Good Hope in South Africa is the point where the warm, moisture-carrying Agulhas Current from the Indian Ocean collides with the cold, nutrient-carrying Benguela Current from the Atlantic. The result--an ecological hotspot, where large schools of sardine lure in whole armies of predators--whales, dolphins, sharks, seals and, yes, humans.

In an alternate Africa, there is another interconnected seaway in association:

A vast sea connecting the Atlantic with the Indian. (Pay no attention to the different colors--they are for a different scenario.) To put it into specifics, the Tethys’ depth is 1205 meters on average and 7,000 maximum. Even so, the ratio between deep and shallow water is remarkably similar to that of the Mediterranean — more or less than 45% of the sea is no deeper than 200 meters (the required maximum depth for a sea to be “shallow”).

With that in mind, is it possible for this alternate North Africa to have a cold Atlantic current colliding with a warm Indian current, producing basically the same results as the Cape of Good Hope?

I doubt that you'll get a second Cape of Good Hope, because that would require two currents from separate ocean gyres coming together. Judging from your map, the likely scenario is of a warm current coming up into the Mediterranean from the Indian Ocean alone; the Mediterranean itself doesn't generate its own gyre, and it probably won't here either. I don't think you need especially deep water for surface currents: a good-sized trench of 200 to 300 metres should be plenty, as long as you don't have anything like Indonesia to interfere with the flow. You do need some width, though (on the order of at least a few hundred kilometres between landmasses) to let a current of any strength pass through: the strait of Gibraltar certainly does not qualify, so you won't have any current coming through there.

As a general rule, cold currents tend to form on western coasts and warm currents on eastern coasts from the equator to about 45 degrees north or south (closer to the poles, this is reversed), which definitely includes the Mediterranean Sea. Picture a giant rounded square with one edge within a few degrees of the equator, heading westward until it hits a continental shelf and bends north or south (away from the equator); this is a warm current at first. It gets blown eastward at about 35-45 degrees north/south, splits again when it hits land, and the current returning to the equator is a cold current (the current going poleward remains at least mild; this latter case is why Norway is warmer than its latitude would suggest). Cold currents are heading to the equator, warm currents to the poles; mild currents are basically warm currents that have been flowing for a long distance and shed some of their heat.

As for your final water flow, my best guess plays out like this. Start with a warm current following the Gulf coastline past Qatar and Saudi Arabia, northwesterly (unless I'm misreading land shapes, you've merged the Arabian region into the African plate). This will start getting blown eastward by the westerlies after hitting the 30 degree line for latitude (this is about the latitude of Cairo). This will keep it from going further west, so it's going to run into Armenia and Azerbaijan and turn eastward. From there, it goes past Turkmenistan. You'll get something similar to the Benguela current now as the water moves south past Afghanistan and Pakistan back to the Indian Ocean. As such, this current won't go to the western Mediterranean; it's not getting anywhere near Italy or France.

Incidentally, you might be interested in climate predictions: Saudi Arabia, Qatar, and the other Gulf states will probably get lots of rain now (producing a tropical or warm temperate climate, instead of a desert), and Armenia and Azerbaijan likewise, perhaps Turkmenistan as well. I wouldn't expect Afghanistan or Pakistan to be so lucky; at best, you might get something similar to Spain, since cold currents tend to be bad for rainfall (note that a cold current goes past Spain and Portugal). I can't be certain, but Greece might start seeing hurricanes.

Here is a map from Wikipedia of world ocean currents. Here is a not as good map that is small enough to embed: 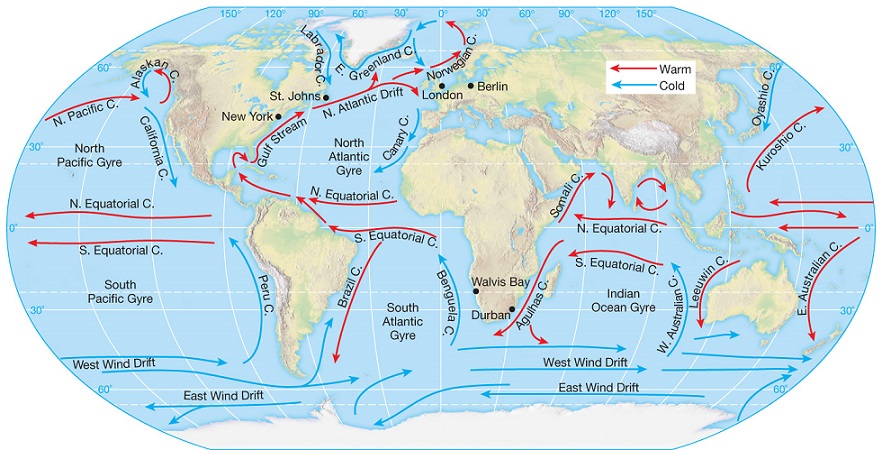 The action of the Somali current is what interets us. The Somali current is moving northwards along the Horn of Africa, and being in the Northern Hemisphere, it is pulled by Coriolis forces in a clockwise direction, or in this case, towards southern Arabia and India.

In your world, there is no Arabia or Middle East to stop this current. But it still wants to drift off to the Northeast, towards your Pakistan and India. It will not be driven strongly through the Mediterranean.

Also, your Strait of Gibralter is also still there. This will impede the cold Canary current from entering the Med.

Without strong external forcing, the Mediterranean will be dominated by the same effects that currently dominate it: strong summer time evaporation. The Med doesn't get much rain and has a lot of evaporation in the Summer, therefore it is saltier than the Atlantic. The result is that cold dense saltwater flows out of the Med at depth, while along the surface lower salinity ocean water flows in. However, now that the Med has a giant entrace in the East, salinity exchange will preferentially happen there and much more slowly at the Strait of Gibralter.

Conclusion: The Med remains much as before, with salinity exchange through the new Tethys sea, but with little current forcing driving warm currents into it.

Not the answer you're looking for? Browse other questions tagged sea currents .