Would aliens evolve a method of communication other than speaking?

Not a duplicate of "Overcoming language barrier; no speech" which confines answers to nothing that is clearly a form of communication; it focuses on translation, not physiology or evolution

Is it feasible for alien life forms to evolve intelligent communication other than"speaking" using sound waves and sensing "speech" by "hearing" those sound waves?

If so, what else is feasible?

To avoid broadness
I am asking for science as close to hard as you can get without needing math or citations; stick to realism, and explain ideas thoroughly. Consider basing answers on Earth species' communication systems as well.

Radio is possible at least hypothetically, the simplest types of radio, crystal radio are structurally simple and don't need power to receive and there are animals that incorporate crystals into their tissue. it's a stretch but not an impossible one. Would really mess with a human observer too it would look a lot like telepathy. MIT cas produced radio reactive biological molecules so you know it is at least possible.

pulses of light are another option, basically think morse code with bioluminosity, there are plenty of deep sea organisms that can emit light in patterns. a side benefit is light can be focused much easier than sound so they might not have problems with people overhearing their conversation.

Smell is possible but unlikely, it's just too slow and limited for complex conversation.

Journeyman mentioned squid aka cuttlefish can use color and pattern, and can even say one thing with the left and another with the right side. I couls easily see this evolving in to full blown conversation. 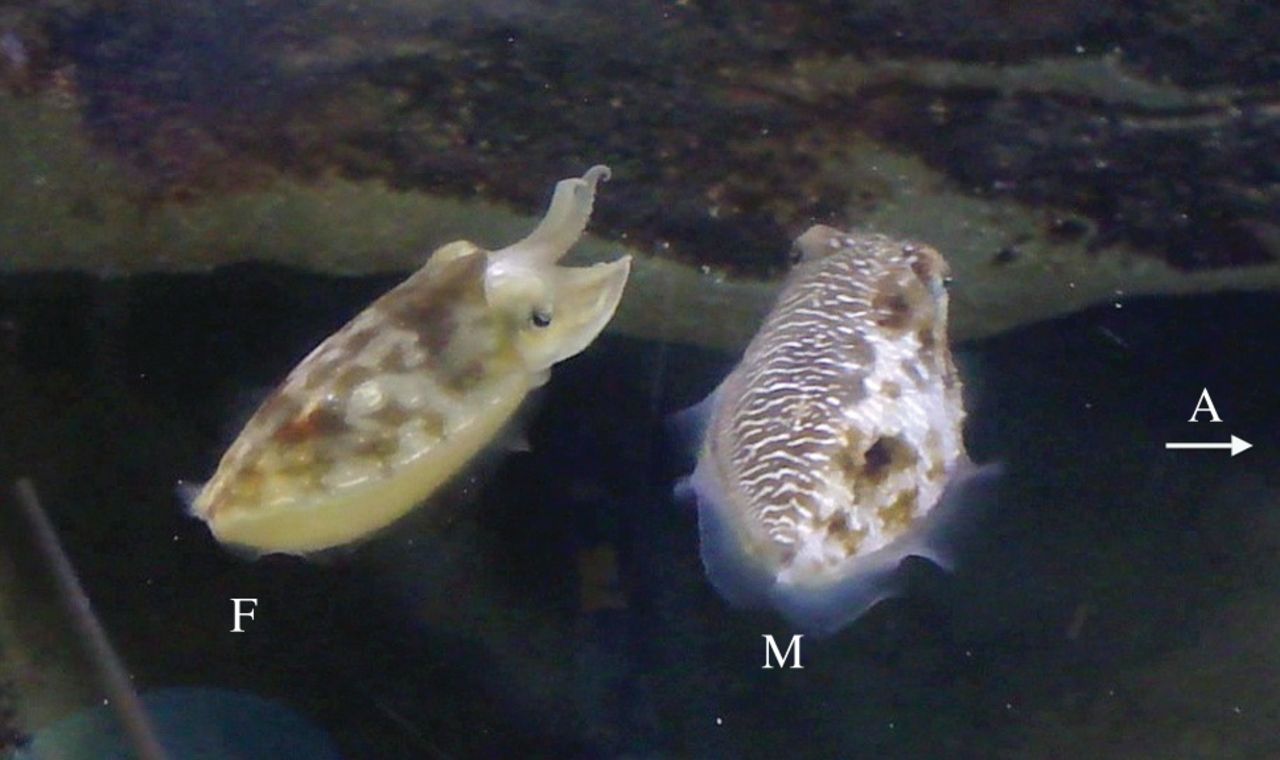 To some extent, cephelapods communicate by colour. In theory, deaf people communicate through the manipulation of EM waves - aka sign language. While Probably completely alien to us these are the 'simplest' modes of communication and pretty much have reasonable 'bandwidth', specially with more adapted limbs or other body parts. For example you could get far more combinations of 'words' or 'letters' from a limb with a reasonable amount of prehensile sub-components, colour and even texture than from a human hand.

While communication by pheromones, or smell is another possibility, the need to wait for the chemicals to dissipate makes complex communication hard.

If you allow the aliens to require direct contact in order to carry out a conversation then you can imagine some sort of direct communication between their nervous systems, using for example dedicated patches on their tegument; this is much more tricky because as far as we know the operation of synapses requires a very strict alignment between the relevant parts of the neurons -- Wikipedia says that the gap between connected neurons is 20 to 40 nm wide for chemical synapses and 3.5 nm wide for electrical synapses. (For comparison, the wavelength of green light is 555 nm.)

Not the answer you're looking for? Browse other questions tagged science-based evolution xenobiology communication or ask your own question.

110
Would intelligent life evolve any other body plan than humanoid?
6
Where Speech is Impossible
9
Overcoming language barrier; no speech

32
Is there a scientifically plausible faster-than-light communication system?
9
How would aliens recognize communication coming from Earth as communication?
110
Would intelligent life evolve any other body plan than humanoid?
4
How would an anthropomorphic humanoid ant race evolve communication?
0
Could aliens naturally evolve synesthesia?
3
How and why would an organism evolve BioSteel?
11
How could an insectoid race communicate with humans?
23
Other than tentacles and jointed digits, what methods of holding items are there that provide similar dexterity?
4
Other Mouthparts For Aliens?
23
Most bit efficient text communication method?