How long does a component of a Dyson swarm spend in shadow?

I'm building a Dyson sphere - a real one, like Freeman Dyson originally proposed, made of swarms of solar collectors in independent orbits that fully surround the star, something like this: 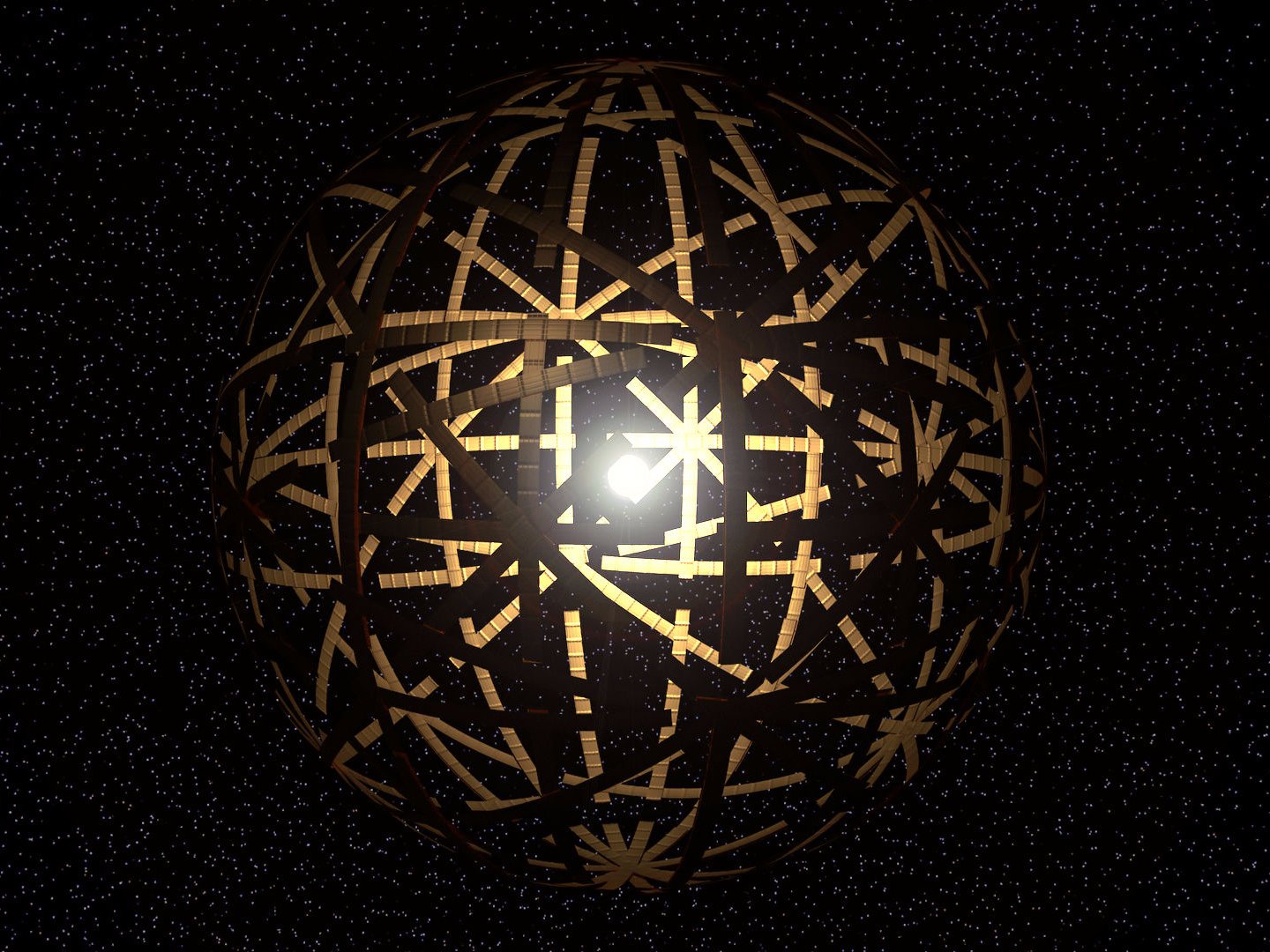 Each collector/habitat will be a truncated triangle, approximately two million kilometers wide by one million high. The inner face of some of the collectors will be inhabited, while others - those further in, exposed to stellar radiation at all times - will be entirely automated.

I'm designing a society to live on one of the habitable plates of the swarm. Being further out, their plate spends most of its time shadowed by other plates, and is only occasionally exposed to the sun. The people of the plate have lost a lot of their advanced knowledge, and they see the star as their life-giving god, the plates closer to it as their heavens, the plates further away as hells.

What I'm trying to work out is exactly how often would they get starlight at different levels of the swarm? How many levels have to be 'above' them for them to get, say 25% sun? Is this something that can be easily calculated, or if not is there an engine or similar I could use to find a result?

Detail I neglected to include originally - the closest plates to the star are about 0.5 AU out, and there's around 2 million kilometers separation between each layer of plates.

For any given shell, calculate the area of all of the plates within that shell, and calculate the total surface area of a sphere at that distance from the star. Dividing those will give you the fraction of the time one can expect plates in that shell to shadow shells further out.

This should be a more than reasonable estimate. It is plausible that some pairs of distances exhibit harmonics that result in different behaviors, but the basic probabilistic approach should be more than sufficient.

Honestly, this kinda depends on a lot of factors: Size of the plates, distance from the star, orbital period, to name a very few.

The suns surface is 12,000 times bigger than Earths, meaning if each plate had the same surface area as the entire planet, you'd need 12,000 of them to cover it.

If you have the plates set 1 AU out, that number gets exponentially bigger.
Even at 1 earth surface area, each plate is going to be insignificant, and even a string of them isn't going to block much light unless the layers are pretty close together.

so a big question is, does having the actual orbital mechanics matter, vs just saying that the cloud of plates blocks out most of the light?

Some napkin math: Assume there are n habitats each with area $A_i, 0<i \le n $ and distance from the center of the sun $R_i$, which are infinitely thin, with totally random orbits at distinct distances.

If $A_k = 2e12$ for all k, and the nearest habitat is 2m km from the center of the sun, and the rest are distributed at fixed intervals of 5000 km then see wolfram alpha.

$A_k$ could also be the total surface area of all habitats at a certain distance from the sun. Of course a more sophisticated orbital scheme could be devised (this setup implies a chaotic strobe light effect) but I'd expect any race capable of engineering a dyson swarm not to use natural sunlight and instead collect the radiation and use it in a more controlled way. Inner layers radiate waste heat which is usable as energy for outer layers.

I'd also not expect them to actually be instantiated as planet-optimized life. If that is the goal, a ring-world esque construct (or swarm with 1 shell at earth-like distance from the sun) makes more sense. Wide variation in distance gives you a wide variation in temperatures.

As AndyD273 stated, there are many factors to consider.

Having elements shield each others is very inefficient, that's why most Dyson swarms feature statites, they do not cast shadows onto each others and can collect light from the entire surface of the star.

If you want to stick with orbiting elements then you must design orbits that lie on different "planes" each perpendicular to at least other two, like this.

In this way it doesn't really matter how distant your habitat is from the star or how large the elements are, the number of yearly "nights" is equal to twice the number of orbits that lie closer to the star than yours. So if your habitat lies on the second closer orbit from the star they will experience two very short nights every "year" (orbit); if they are on the third closer orbit they will have 4 nights, on the fourth 6 nights and so on. Nights are equally sparsed throughout the year, so if a year is 200 days and your habitat is on the third orbit they will experience 4 nights a year each every 50 days. The nights all last the same time and are probably very short; their duration depends on orbital velocity.

Consider that if you want artificial gravity you will need to spin your habitat unless it is massive enough to have its own gravity (this would create additional day/night cycles). Statite elements, on the other hand, don't need to spin to have gravity even if they are not massive enough, but you need to live on the dark side.

It is enough just one plate of the same size which at an orbit closer to the sun to block those people from sunlight completely.

To dim light to 25% of possible light, sphere below them should be about 75% covered by other plates.

Not the answer you're looking for? Browse other questions tagged orbital-mechanics megastructures dyson-spheres or ask your own question.