Season cycle that would occur on a habitable planet that orbits two suns? 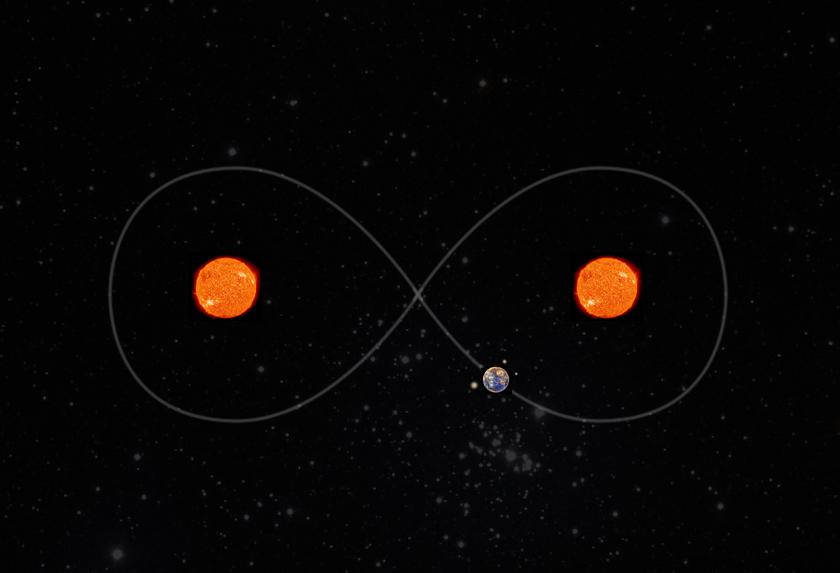 I'm going to attack this with math. First off, I am not going to make any assumptions about what orbits might be stable. That is something we can check with an orbit simulator like rebound, as I did in this question. Instead, I will assume there is a stable orbit around two suns of equal mass and luminosity. The orbital profile will be a perfect circle (0 eccentricity orbit) at 1 AU for 3/4 of a revolution around each sun and then a straight line connecting it to the next sun.

Since this is an ugly piecewise function, and I am solving using a computer, I am defining it in python as such: 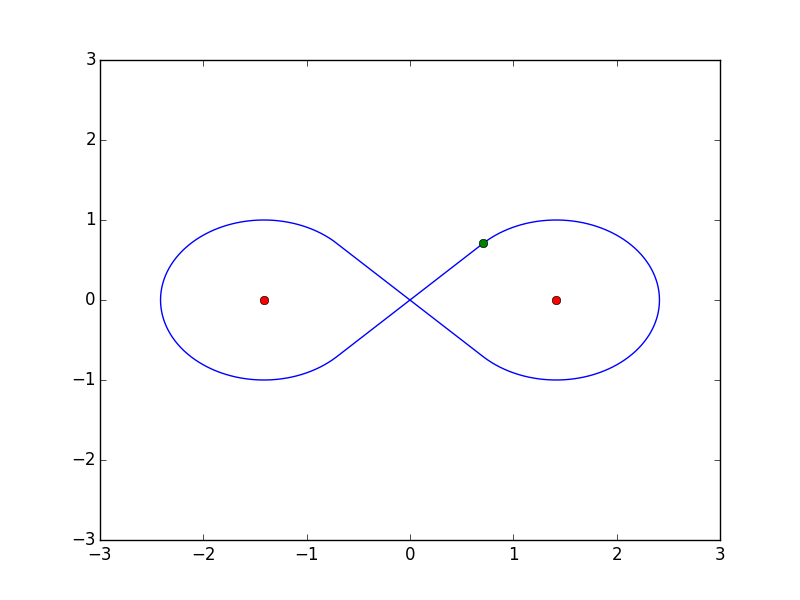 The red dots are the two suns. The green dot is our arbitrary time = 0 for the next part; the planet starts moving clockwise around the sun on the right. So far so good, now let us calculate distance from each sun, and plot that as a function of time.

Determine the distance from each sun 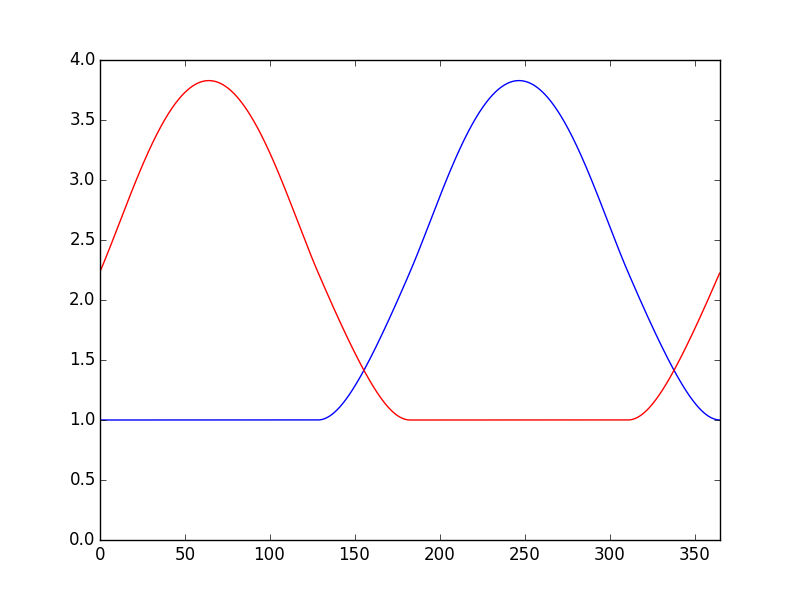 Where dist_1 is from the right star and is in blue, and dist_2 is the left star and is in red. I scaled the time factor to 365 days in a year cause I'm a geocentric kind of dude, but I could use any scale factor. If the planet was moving at the velocity of Earth it would take 1342 days to complete this year, fyi. 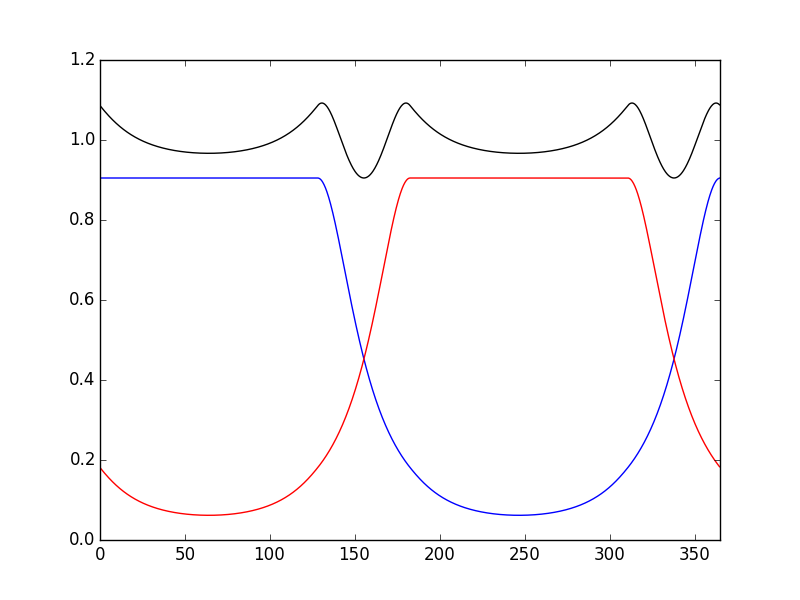 Ah, glorious seasons. Lets say we have an earth-like 23.5 degree axial tilt. How will that affect us? Depends on how we orient the tilt. I will arbitrarily declare that the Northern hemisphere is fully tilted towards the two stars when the planet is at the far right point of its orbital trajectory at point ($\sqrt{2}+1$, 0).

I calculate the effect of tilt both at the equator and on a point 45 degrees N. At summer solstice (at the point mentioned above) $cos(45-23.5) = 0.930$ of equatorial sunlight, and at winter solstice it will get $cos(45+23.5) = 0.367$ of equatorial sunlight. The angle to either star in our coordinate system is calculated from $\text{arctan}(\frac{y}{x})$ where x and y are the coordinate distances from the star. The cosine of the angle to the sun in radians, which is the proportion of the axial tilt that the planet is currently experiencing, can be expressed as:

We will multiply that by the axial tilt, add it to the latitude, and calculate the addition or reduction in light energy by season.

So here are two graphs showing how the seasons will work. The first graph is for the equator of our planet, compared with earth. The black line is total energy recieved by this planet (earth would be just a straight line at one, assuming a perfectly circular orbit), red is the relative insolation at this planet's equator, and green is relative insolation at our equator. 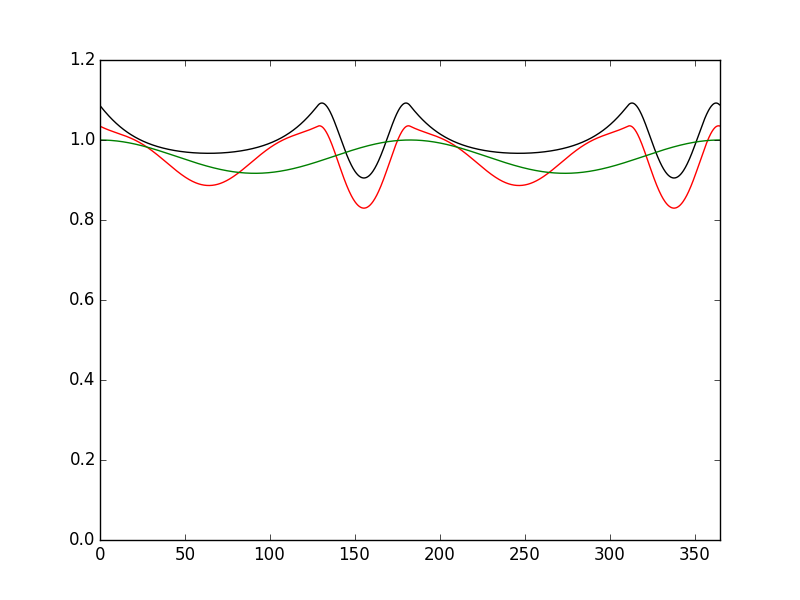 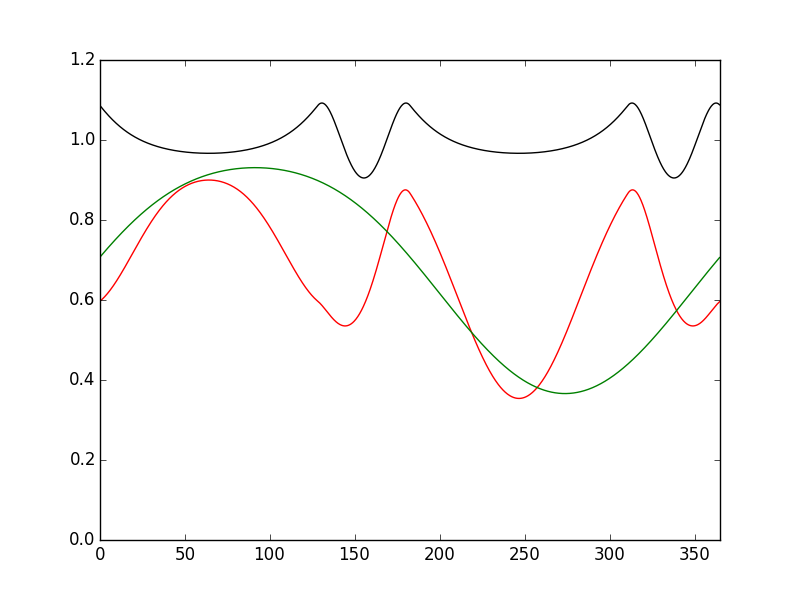 And remember, I scaled this planet so its day is as long as an Earth day. If, for example, you set the year to be the 1342 earth days for velocity matching, then the first red-hump summer for the other planet would last as long as a summer here on earth.

Well hope this is what you were looking for; I have all the code saved if you want me to post any more of it, or throw up a graph for a different latitude.

As requested here is a 45 degrees N profile for a 750 day year compared to what Earth would be doing in that approximately 2 year period. 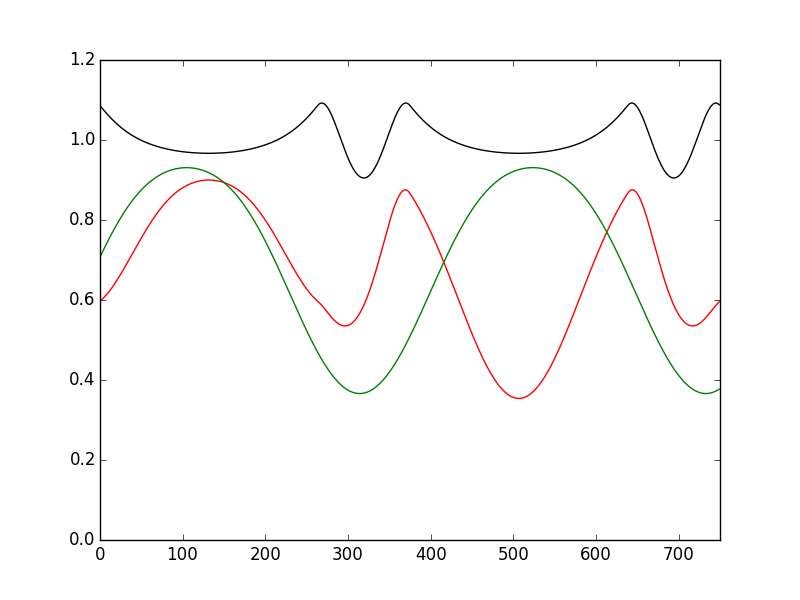 As far as the max insolation; the max value for Earth's summer is 0.917, which represents 91.7% of max insolation at the equator. For our mystery planet, the number is 0.830; this is off by a factor of 0.905, which you may recall is the scaling factor by which we had to reduce these other suns to get Earth-like total year-round solar insolation. So that makes sense. On the winter side, however, the numbers are 0.366 for Earth and 0.354 for the other planet. Those should show the same 0.905 ratio. I don't know if this is an error in the code or just somethign I'm not understanding, but I'll take a look.

Incidentally, darkest winter at 45 N is not while the planet is between the two stars. This is the coolest time at the equator, the sunlight dips down to about 80% of max; that is like May or July in the mid-latitudes. But at 45 N, you are about equidistant from the two stars, and always getting 'summer' from one of the two. So that mitigates the wintery-ness. Darkest winter is when you are tilted away from both suns on the far left of the orbit plot.

The biggest shock would be the period in the center of the figure eight where there would be winter--or something near it--on the entire planet.

Depending on the tilt of the planet's axis, the seasons would be pretty weird. Let's assume, to make it easy, that the time it would take this planet to revolve one of these suns is 1 earth-year. So one Bob-year would be a bit more than 2 earth-years. For most of the first earth-year, on the left and right loops of the orbit, the seasons would be just like those of earth. But as Bob diverts off a circular orbit, the summer would get colder and colder. By the center of the figure 8, Bob is virtually in a perpetual state of winter all round the surface of the planet. And yes, there would be no night. Assuming that Bob is equidistant from both suns, one sun would be setting as the other one rose on one day of the year. All other days there would be just a bit of complete darkness. But this wouldn't last long. Bob would then get back on track on a circular orbit around the second sun.

Let's divide Bob into 2 hemispheres--the North [facing the people looking at the picture] and the South. Let's say the North hemisphere is tilted to the right as you look at the picture. So, beginning on the leftmost point of the orbit, the North follows this pattern:

And the South would follow the same pattern, just beginning with the North's #8.

Well fist off the planet would be almost completely bright when in the center of the two suns (about 2/8ths of the planet would be bathed in a sunset like state), some plants would be different than the ones we see on earth, because most plants on earth have evolved to incorporate the night cycle into the day of plants, but you'd also have to incorporate the times where there is half sunlight. and there would be a difference with animal life, due to the lack of night time. We would have a lot more non nocturnal animals, and the human diet would probably be affected. To sum it up the ecosystem would change drastically due to the change in light distribution in the world, for better or for worse, that is up for you to decide.

Not the answer you're looking for? Browse other questions tagged planets space day-night seasons .

2
How would day and night look like on a planet that orbits two suns?
23
Is it possible to have a sun with visible phases or cycles?
27
Can you add a mini moon to Earth?
14
Is there a habitability zone between the primary and secondary stars of a binary star system?
4
Can a habitable planet exist into a stable three body orbit system of suns?
9
Temperatures in an eccentric orbit?
7
Is this circumbinary planet set up in a stable manner?

29
How critical is it for life that a planet remains within the habitable zone at all times?
7
How could a planet have a 40 hour day cycle with its nights only lasting 3 hours?
8
Seasons/Months on a Habitable Gas Giant Moon
2
Could a habitable tidally locked planet have a day and night cycle caused by the eccentricity of its orbit?
7
How would tidal forces impact two habitable moons in a horseshoe orbit?
3
Day/night cycle science help?
7
Realistic ways a Planet or Large Moon could have Variable Day/Night periods
5
Under which circumstances could a planet have two visible suns?
4
Logistics of habitable moons orbiting a brown dwarf
3
How would a planet's (human) life adapt to inconsistent night duration?