Imagine an arrow, but instead of the traditional arrowhead (thick and pointy) it uses a much thinner and sharper razor-like head. I am thinking such an arrow could be used for delivering death to unarmored targets at high range (at which point a conventional, less-sharp arrow no longer has the strength to penetrate clothing or fur, but a super sharp razor head can).

Do the lightness and fragility of such an arrowhead cause issues when firing it? Are there any other possible advantages or disadvantages? Obviously, if such an arrow were good someone somewhere would already be using it, but given that we didn't have the tech for disposable razor blades when arrows were en vogue, maybe there's something to it beyond impractical but scary looking weaponry.

You have just described a modern hunting broadhead. And there are more variations than you can imagine. Its worth noting that they can penetrate kevlar body armor. I suggest typing "modern broadhead" in a google image search. 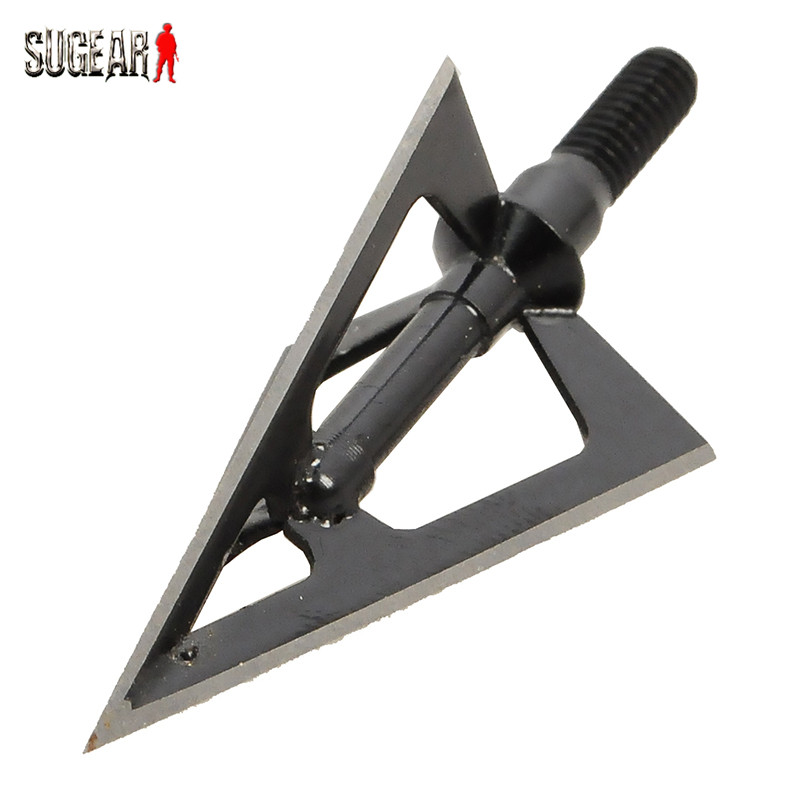 So, a couple other answers have already mentioned that this can actually be a thing. I think I'll focus in on the actual pluses and minuses.

One potential issue is that this thin, light arrowhead is a lot more fragile. It will break far more easily, especially if it runs into something more solid (like a bone. or if it misses, and hits a tree or a rock. Or even armor). It is a lot easier to sharpen your thick arrowhead than craft a new one because the thin razor-sharp thing broke. Also, thick sturdy arrowheads can stand up to a lot of sharpening and other use and abuse, while even if carefully maintained a thin razor-sharp arrowhead will just run out of material to sharpen much faster.

Another issue is that it will not cause as much injury, making it generally less effective as a weapon. Arrows generally don't depend on their sharpness to injure nearly as much as their kinetic force, and a bigger arrowhead is better at dumping that force into the target, and tearing the target up more, instead of slicing cleanly through and leaving a smaller injury behind. Sharpness means you need less force to make the same cut - but the force in this case is constant, so the razor arrow is more likely to slice more cleanly instead, and generally do less damage.

The razor sharp broadheads shown in the other answers use a lot of empty space to counterbalance this problem, which give a bigger profile to shred with to counterbalance the sharpness and the thinness of the actual blade portion of the arrow, which a) takes a lot more time and effort to make, and is really only practical with modern manufacturing and b) is a lot harder to maintain, so makes the most sense when arrowheads are discarded when dull or damaged, not repaired and reused (imagine trying to re-sharpen that curvy one!).

As for your idea that razor arrowheads will do more damage at range, I'm not sure of that. Especially not the ones pictured in the other answers. Like I said, arrows generally depend on their kinetic force to do damage, to the point where sharpness is, not irrelevant exactly but certainly much less critical. If you look at padded arrows, they need to have such a big, padded flare because even a dull, flat-ended fletched stick with no arrowhead can do a lot of damage with the force of the bow behind it. The point is, if the situation is actually that the arrow's sharpness makes a difference between the arrow puncturing or not, means you just don't have enough force behind it in general. Your sharper razor arrowhead might penetrate just a little more, but it is still likely to be a shallow little slice with the arrow's tip, because the person is too far out of range. If there isn't enough force for a regular arrowhead to penetrate, there isn't enough force for the razor arrowhead to kill. Also, at that range the arrow's lightness (with a lighter razor tip) will also make a difference, both in how far it goes and how deep it penetrates what it hits.

Really, you probably want a heavy, narrow, needle-pointed head (bodkin, I think) for better puncturing power, not a flat thin razor sharp arrowhead... and you can make it heavy enough (by adding length to the point) to add to your arrow's kinetic force, instead of lighter to take some of that force away. Actually, what you really want is a stronger bow, or at least some method of extra mechanical leverage (crossbow or something), but a narrow needle-tip will probably work in the meantime.

A bodkin, which will do what you want even if it isn't what you asked about. 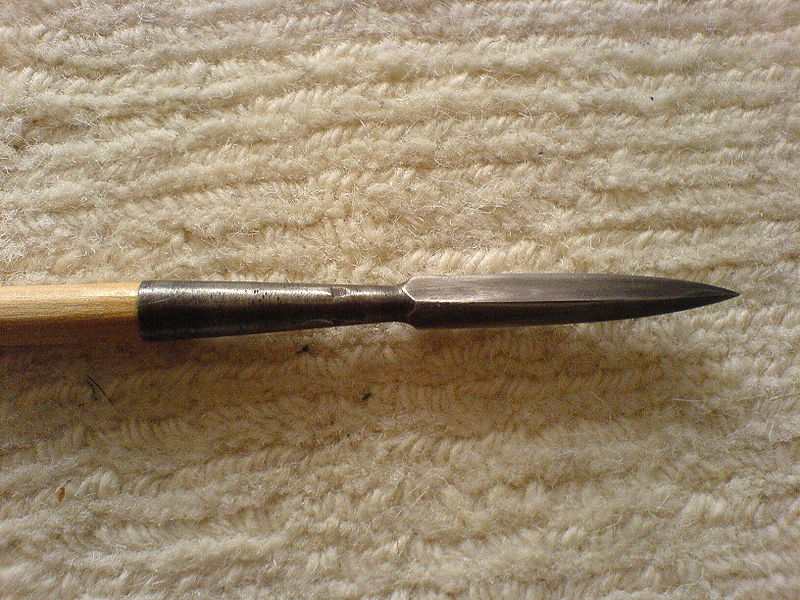 Your question immediately made me think of a variety of modern broadheads with near-razor thin blades. Note that the blades are always attached around the shaft and there's no way to eliminate it.

Swhacker makes a modern retractable broadhead that opens on impact with 2 or 3 blades. The blades are thinner than most knives but thicker than razor blades. 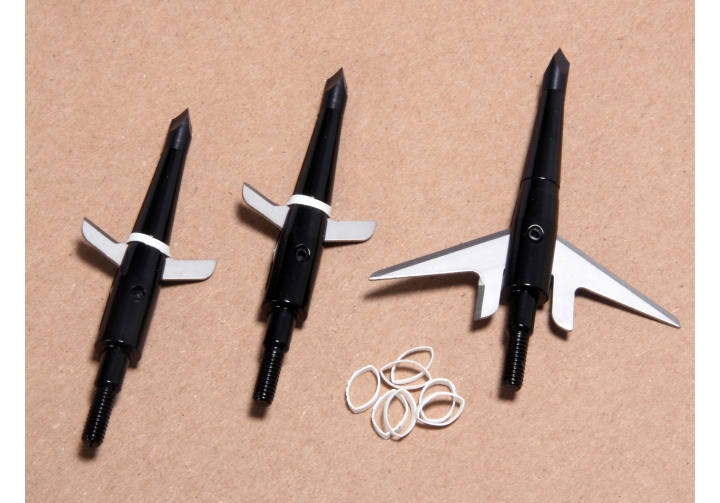 Also the "Toxic" broadhead has comparable (though fixed) blades. It's not poisoned as the name suggests, but it's still deadly. It's hard to describe the blade combination and design, so I'll include an image: 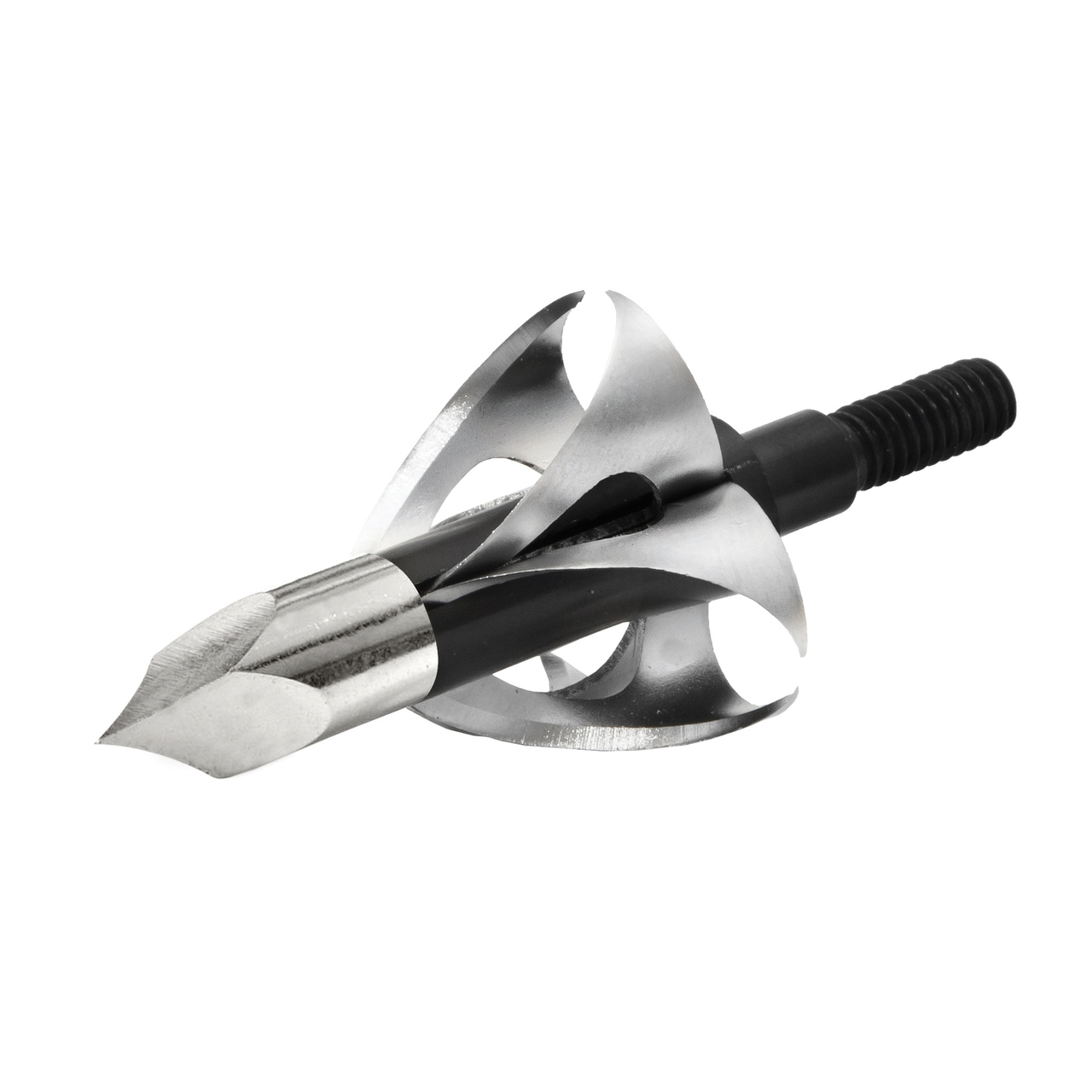 Shot from a (60lb) compound bow these will have a release speed of around 400 km/h and, a well placed shot should be able to kill any animal up to a rhino or elephant (and maybe them too).

In ballistics gel they'll get around 20-30cm of penetration. That's in and out most parts of most humans. I've seen them go in, out, in again and out again of small game - it's hard describe but youtube some fox bow kills.

They're not as fragile as you think and can be treated pretty rough without being damaged. They'll smash through bone without becoming damaged.

With a wooden shaft the thin light arrowhead would not have enough weight to fall tip first. You would have to add some weight to the tip. Romans used lead to balance their sling darts and javelins, you could do the same thing. Or you could shape the shaft so it has more weight in the front.

With a carbon tube this problem shouldn't occur because it will almost always be lighter than the tip.

If you want more range you need to make heavier arrows so they lose their kinetic energy slower. But to shoot heavier projectiles you need more powerful bow.

So it is an endless struggle of balance that the weapon makers must figure out.

You could use something similar to an injection needle and cover it in poison. Otherwise a smaller point will likely do less damage

56
Designing Hacking Arrows
5
Making freezer arrows using endothermic reactions
10
Arrows Beyond The Speed Of Sound?
42
How to trigger explosive arrows?
18
Hands-Free Methods of Firing Arrows for Flying Soldiers
6
How could an object be impervious to high velocity piercing from arrows yet still be vulnerable to cutting from (extremely) razor sharp blades?
5
Homing arrows, how can they work?
14
How would blasting a barrage of arrows with heat affect the metal arrowheads?
11
What would make a plant's leaves razor-sharp?