How small in diameter a planet can be while retaining most of Earth's properties?

Suppose that I have a planet very similar to Earth. It has the same level of gravity, water-land ratio, temperature, air composition, rotation and revolution speed, tectonic activities, temperature. It has ice caps on the poles just like Earth. It also have life on it with plants, animals and humans, although they can be different than what we have here.

How small this planet can be in diameter while still retaining those properties? I suspect that such planet would have to be denser so that it retains the same amount of mass which will then affect the gravitational pull. But just how small is the limit so that it still have enough time (that is the core is still active long enough) for life to bloom on it and evolve into our level (bipedal humanoid with intelligence, if possible).

Surface gravity is really the most important quantity when it comes to determining many of your planet's properties. It can be used to constrain atmospheric composition, planetary mass and radius, composition, and more. 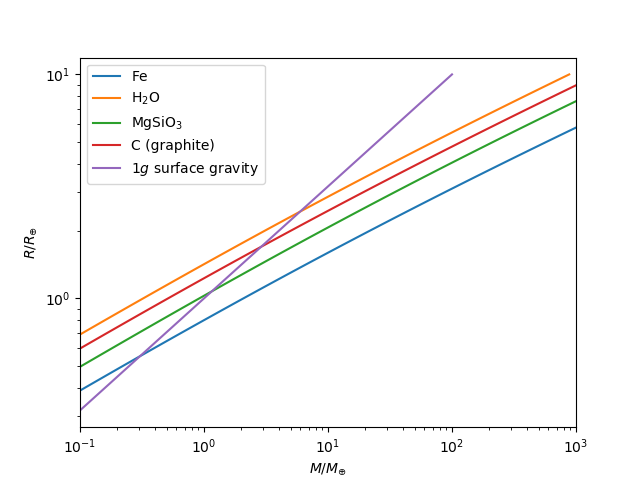 Assuming that iron is the densest likely composition, we see a lower radius limit of $R\approx0.5R_{\oplus}$, corresponding to $M\approx0.2M_{\oplus}$. We appear to have found exoplanets with higher densities (e.g. Kepler-36b), but those may be due to measurement errors; they seem unphysical.

Plate tectonics depend on a number of factors, including a planet's size and composition. The smaller the planet, the quicker the cooling rate, meaning that this body is likely to cool quickly, making plate tectonics unfeasible. Arguably, though, our stripped-mantle iron planet lacks a mantle or crust, and so plate tectonics as we know it cannot exist at any point in time.

Assuming a solid iron surface, with water constituting the liquid part, I see no reason why the temperature couldn't be similar to Earth, assuming a similar atmosphere. The albedo should be the same, and if the planet is as far from a Sun-like star as Earth is, its effective temperature should be the same. Depending on the atmosphere you end up with, you can vary the orbital and stellar parameters as you choose.

Atmospheric escape is going to be a problem; it's how Earth lost its early hydrogen/helium envelope. I covered that more thoroughly in an answer on Physics Stack Exchange, but the important equation here is for the Jeans flux for a particle of mass $m$, $\phi_J(m)$, which describes how many particles of mass $m$ will escape the atmosphere through thermal methods: $$\phi_J(m)\propto n_c\sqrt{\frac{2kT}{m}}\left(1+\frac{GMm}{kTr}\right)\exp\left(-\frac{GMm}{kTr}\right)$$ The important term here is $$\frac{GMm}{kTr}\approx\frac{gR}{kT}$$ where $r$ is the distance to the lower edge of the exosphere. Given that $g$ is the same as $g$ on Earth, and $R=0.2R_{\oplus}$, then at Earth-like surface temperatures, we should see substantially higher Jeans fluxes.

Jeans flux primarily impacts hydrogen, helium, and other light gases, so these gases may be lost entirely. It's also possible that oxygen, nitrogen, and related gases will be lost, although the main mechanisms for their loss are non-thermal. Still, you likely will have an atmosphere different from Earth's.

These are essentially arbitrary. You can put the planet as close or as far from the star as you want (although I'd recommend keeping it in the habitable zone if you want life), so you can pick whatever values suit your purposes. Size, mass and surface gravity aren't important here for low rotation rates; as ben pointed out, for large angular speeds, the centrifugal force does indeed become important.

We can probably make a really small planet if we assume it is made of a very dense material like iridium or platinum or such - at least in the core.

However, there is another factor which we need - size of the biome. The smaller the biome, the slower it will develop. A sufficiently small one might even end up in an evolutionary stand-still - any advances which require a few less advantageous mutations to happen are impossible because the biome is too small for them to survive the unmutated competition long enough.

If you want a really small planet and high speed evolution, I suggest a water planet with frozen polar caps. Kind of like Europa, but in the habitable zone. Let it have lots of energy, say from being part of a binary planet system and close to a not-too-bright sun, so tidal forces heat up the core and create loads of underwater volcanoes.

This planet has a much lower gravity, but could otherwise be quite similar to Earth.

Plants could start to form as algae, growing into water lilies in small water lakes surrounded by ice, then spread over the rest of the ocean and eventually compete for height, forming grass or even bamboo like floating plants, connected with roots, so smaller animals can walk on them - like in a swamp.

As there is no real land, we have to evolve our humanoids from animals closer to the ocean - maybe similar to penguins, but eventually conquering the ice in a fashion close to the Innuit and taking plants with them using green houses or floating farms once they have technology.

Not the answer you're looking for? Browse other questions tagged reality-check planets earth-like or ask your own question.

7
How large can differences in gravity be without being overly dangerous to humans?

20
What would be the tallest possible height for humanlike creatures in earthlike conditions?
0
Would this Planet be habitable for humans
8
How to get an extreme temperature range between equator and poles without tidal locking
2
Designing a super-comfortable Earth analog
4
Atmosphere of habitable world around K-type star
1
What is the largest I can make my water planet, while remaining within Earth-like parameters?
9
How do I give my planet a stronger magnetic field? Playing with variables
9
How can an Earth-like moon meet these angular diameter conditions?
5
Possibility of a “hot Mars”